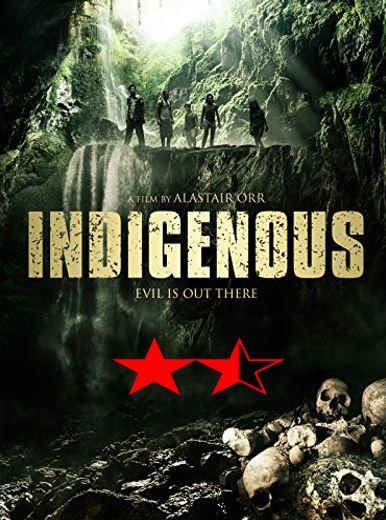 Plot: American Tourists travel to Panama and have a very terrifying experience.

Tagline – There are places you should never visit. This is one of them.

Story: Prey starts as five tourists Scott (Soetenga), Steph (McKeon), Elena (Pernas), Trevor (Fode) and Charlie (Anderson) are on vacation in Panama for adventures with surfing being one of their main goals, when the friends learn of a perfect waterfall in a forbidden jungle, they go there with the local woman Carmen (Penuela).

Once there and after their fun they start getting hunted down by a mysterious creature, lost in the jungle the legendary Chupacabra is hunting them down as the race to desperately escape.

Characters – Scott is about to move on with the next chapter of his life, this could be his last holiday with his friends and he wants to make the most of it, part of his work is a new app which can use social media to locate and identify people on video, he picks this location, he records the message for help. Steph is Scott’s girlfriend who also worked on the app, well I think the characters are not drawn out well, she is about to go to veterinary school. Elena is the other female friend, that’s about all we learn about her and Trevor and Charlie are the other guy friends who want drinks and sex.

Performances – The performances, well the group go have chemistry between them and the fun around their adventure seems realistic, the problems come from the horror side of the film which is mostly them running in darkness and screaming, which never gives anyone a chance to perform well.

Story – The story follows the group of tourists that end up going too deep into the Panama jungle and encounter the Chupacabra, here we have the standard characters doing the running through the jungle routine, this is all done before and done a lot better, the most interesting element of the story comes from seeing the social media rescue attempt which I feel we could have seen larger parts to make it more interesting. While I would like to say this is easy to watch, I would be lying because everything in the jungle is shaky cam and difficult to figure out who is who between the character in the dark landscapes. It does however follow the normal trends, you know the order the people will get picked off without needing to think too much about it.

Horror – The horror side of the film comes with the ideas of it being a creature feature, though it does feel like The Descent creatures got ripped off and thrown into a jungle.

Settings – Panama has the beauty which we see early on and the mystery about its jungle, which brings new horrors to the film.

Special Effects – The effects focus more on the wounds which can look graphic while the creature looks frightening enough in the dark.

Scene of the Movie – The media rescue.

That Moment That Annoyed Me – The shaky cam.

Final Thoughts – This is a by the books creature feature which never gets out of first gear, relies on shaky cam to often and doesn’t give us enough characters to care about.

Plot: Based on the novel by Antonio Di Benedetto written in 1956, on Don Diego de Zama, a Spanish officer of the seventeenth century settled in Asunción, who awaits his transfer to Buenos Aires.

Story: Zama starts with Spanish Colonel Zama (Cacho) who is ruling over a small community, waiting for his transfer to a bigger city, he looks after the local from the trouble makers which include Vicuna (Nachtergaele), while trying to win the heart of the most beautiful woman on the island Luciana (Duenas).

We continue to follow Zama go about his everyday routines, which sees him control the slavery side of the island, protecting the woman and just trying to prove he can handle to pressure coming his way.

Characters – Colonel Zama has been placed by a small community in Asuncion, he wants to move to Buenos Aires believing he has done everything he can for this small community, he has kept the peace within the community, dealing with the problems and treating everybody fair, he will face his toughest test that goes with the wait. Luciana is the beautiful woman that Zama is constantly trying to impress in the community Vicuna Porto has caused problems before and is one of the reasons why Zama needs to remain in control with his nonsense ideas. We do get to meet the different people around the community which does show the difference between the natives and the Spanish that were invading this land.

Performances – Daniel Gimenez Cacho is the strongest member of the cast here, he brings us a character which is stuck in a position he hates, but must make the most of it too make it through to the next stage. The rest of the cast are strong supporters in the film without hitting the highest levels of what to expect from the film.

Story – The story here follows a Spanish Colonel that is stranded looking after a small community, trying to keep things in order, hoping that one day he will get a transfer to a better location, only to find himself at the mercy of the locals that no longer want the Spanish invaders. This does paint the ideas of how any invading nations that could upset the land, we see how some people are just forced into the location who do want to do good without being accepted, with conflict being the only option for the locals.

Settings – The film does put us in the island location which does show us just how lost Zama is being left in this location.

Scene of the Movie – Vicuna shows his true colours.

That Moment That Annoyed Me – The pacing isn’t the best.

Final Thoughts – This is an interesting look at how the invaders treated and were treated by the locals who wanted to stop losing their land.