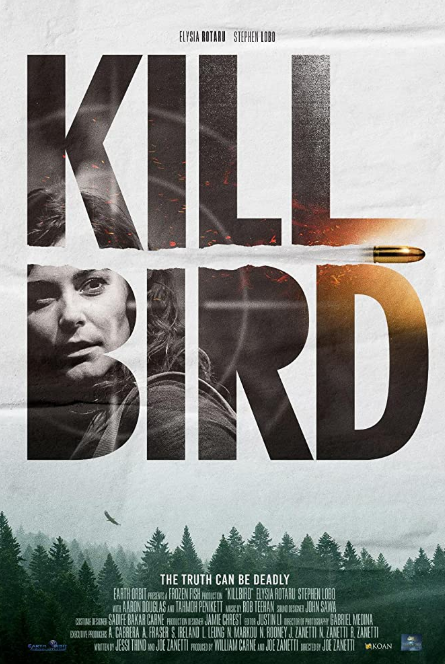 Plot: When a young woman’s car breaks down in back country Oregon, she finds herself at the mercy of a paranoid conspiracy theorist, who assumes she’s a government agent.

Story: Killbird starts when a woman Taylor (Rotaru) is on a birding adventure when her car breaks down, with the only house she can find being the remote cabin of Riad (Lobo), a man that is very uneasy to let her into his house, the two look to get to know each other, while Riad clearly has a secret, he believes Taylor to have one too.

What follows is a battle of wits between the two, as Riad is trying to discover if Taylor is telling the truth or not, while Taylor is trying to hide her own reason for being here.

Characters – Taylor is a woman that is birding, when she gets stuck in a remote location, where she finds herself being held captive by the owner, she is trying to get information, while trying to understand his point of view. Riad is the lone man living in the cabin in the woods, he has been living there for years, working on something bigger, he has been working on a bigger conspiracy theory that has been left in place for years in America, with his own one he believes in, involves avenging his brother who took the fall for a major disaster.

Performances – Elysia Rotaru in the leading role is great to watch, we does keep us on edge about whether her character is innocent in everything or playing the bigger game, while Stephen Lobo shows us just how on edge his character is meant to be through the film.

Story – The story follows a woman that finds herself in a remote cabin in the woods, where a lone man lives, off the grid away from the world, the two clash on who could be telling the truth and just how is in control of the situation. The story does keep us guessing to everything that is unfolding, we are not sure who to believe about what is happening, you never can put your finger on which one is telling the truth, or doing the right thing, which is refreshing. The biggest weakness, would be that we are focusing on the incident that is nearly 20 years old, it also doesn’t help that we focus on a real event, because it could become too personal for certain audience members.

Thriller – The thriller side of the film focuses on just how the two are trying to keep ahead of each other, never letting us know who is truly in control.

Settings – The film takes place in one location, the cabin in the woods, it shows how someone would live off the grid while working on a bigger idea, only for the problems of being away from the world could make you a bigger threat.

That Moment That Annoyed Me – The incident being real could be seen as too personal.

Final Thoughts – This is an interesting thriller that could show how a conspiracy theory could spiral out of control with what could be true or not.