Plot: Three people – a rich couple and a crew member – are shipwrecked on a tropical island and their subsequent fight for survival becomes even tougher when they begin to turn on each other.

Verdict: Just Brook in a Bikini

Story: Three starts when a rich group of tourists with Jack (Zane) and his wife Jennifer (Brook) go on a boating trip in the tropics, when the boat catches fire, Jennifer finds herself on a beach with one of the cabin boys Manuel (Di Pace), as they look to survive, until Jack arrives on the island too.

The men start competing for Jennifer’s attention with her husband not wanting her talking to anybody else even if Manuel can catch and feed the survivors, and Manuel just wanting to survive his time on the island, we get to see the animalistic side of the characters as they look to show dominance on the island.

Characters – Jack is a business man that has always expected people to do a job, never really thanking them along the way. Once trapped on the island he becomes paranoid Manuel is trying to steal his wife and won’t accept that he could help them all survive. Jennifer is the trophy wife of Jack’s, she really doesn’t know how to do anything on the island and just wonders around in her bikini more often than not. Manuel is a cabin boy that survives the shipwreck and wants to impress Jennifer, he knows how to survive on the island and is overly aggressive towards woman, which for some reason is a turn on about his character.

Performances – Billy Zane is not very good in this leading role, he is the best of the three actors, but he just isn’t believable first as Kelly brook’s husband and secondly as the guy about to snap. Kelly Brook, bless her, she really can’t act can she, but she does look pretty. Juan Pablo Di Pace struggles to make an impact as the fiery Latino stereotype.

Story – The story follows three people stranded on an island after their boat gets shipwrecked, first they must learn to survive o the island, then we just get a love triangle between the two men fighting over the one woman on the island, there is also some voodoo. The story just becomes a battle to see who could impress Jennifer the most instead of focusing on surviving, we don’t get too deep into a story and more of the film just seems to be about getting Kelly Brook to walk around in her bikini.

Adventure/Horror – The adventure blends well with the horror of not knowing who you can trust when you are trapped on an island well, we never get to the level where everything gets to the level where they could become life and death.

Settings – The film is set in one singular location an island which leaves the people stranded there needing to figure out how to survive this situation. 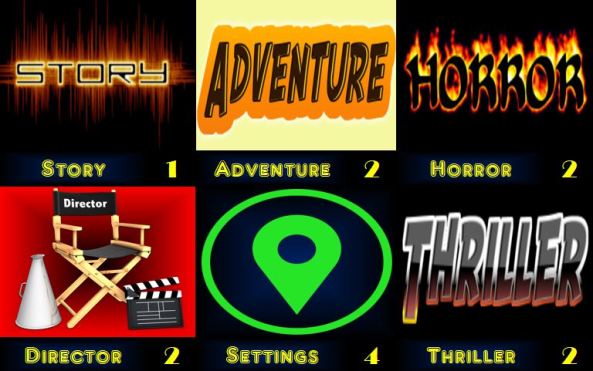 That Moment That Annoyed Me – It never feels like it is life and death.

Final Thoughts – This is a dull adventure horror that is more about the love triangle than actually focusing on the bigger story going on about surviving.

Overall: Love Triangle without any corners.

Plot: Fiona visits Paris for the first time to assist her myopic Aunt Martha. Catastrophes ensue, mainly involving Dom, a homeless man who has yet to have an emotion or thought he was afraid of expressing.

Story: Lost in Paris starts when Fiona (Gordon) is asked to go to Paris to look after her elderly Aunt Martha (Riva), having never been to Paris, Fiona goes for it only for this trip to become difficult as she can’t locate her Aunt. A homeless man Dom (Abel) starts following her and soon the unlikely pair are searching around Paris for her Aunt.

Thoughts on Lost in Paris

Characters – Fiona is the woman that doesn’t seem to have ever left her Snowy town in Canada, she gets that chance when her Aunt asks for to come to Paris, she does make the trip and soon finds herself searching Paris for her, losing her belongings along the way. She must accept help from a homeless man as she continues to find herself in the comical positions. Dom is the homeless man that geos about his days searching for food, old cigarette butts and just surviving, until he meets Fiona who he will help around Paris believing she could be the one for him. Martha is the Aunt who moved to Paris believing it to be the best place int eh world, it turns out in her eyes to be that place and she never wants to leave which brings Fiona there to keep her away from a nursing home. Norman is the new friend Martha has made one that has given her enjoyment in her later years.

Performances – Fiona Gordon in the leading role gives us a comical performance which is unlike the ones we are used to seeing in the genre, this will be a word I use a lot through this view, quirky. Dominique Abel gives an equal quirky performance which works well with Fiona. Emmanuelle Riva gets to play a character unlike anything we have seen from her before which only adds to the comedy in the film.

Story – The story follows one lady going to Paris to help care for her Aunt only to get there and discover she is missing and must befriend a homeless man to find her. The story plays on the idea that you are never too old to do something new for the first time, help can be found in strange locations and the style of story focuses on the comedy which was made famous by the silent film stars of yester year. This will not be the final time I say quirky, which is the best way to describe the story.

Comedy – The comedy is very quirky and does pay a lot of respect to the likes of Buster Keaton with how most of the film unfolds.

Settings – The film is set in Paris which for anyone visiting the country is always going to experience something new and amazing which is what Fiona goes through.

Scene of the Movie – Eiffel Tower.

That Moment That Annoyed Me – The comedy can miss at times.

Final Thoughts – This is a nice quirky (last time I promise) comedy that pays respect to the silent movie stars with its style and teaches people to take the chance they always dreamed of taking.

Overall: Comedy that will make you take that chance.