Plot: Ivan and Chiara meet on a beautiful Sicilian island to prepare for the wedding of Ivan’s brother and Chiara’s best friend. Despite the fact that Ivan is determined not to repeat the failure of his last relationship and Chiara does not want to jeopardise her marriage, the two fall in love with each other. They resolve to live their relationship for only a few days and then break it off when the wedding guests arrive on the island. However, they made such a plan, without taking love into account.

Verdict: An Affair to Forget

Story: 7 Days starts when Ivan (Todeschini) and Chiara (Barela) arrive on a Sicilian island to prepare for Richard (Barbe) and Francesca’s (Olsansky) wedding, this includes getting the hotel ready for guests and just making everything presentable for a ceremony.

The pair have seven days they must spend together, which will see them get involved in an affair, where they must both face a difficult decision about after.

Characters – Ivan has gone of this trip to help prepare his brother’s wedding, he doesn’t think the time limit is possible, but when he meets Chiara, he falls in love wanting to put a side his past relationship failings to be with her. Chiara is the best friend of the bride to be, she is also here to help prepare for the wedding, only she does have a partner back home, meaning that she is willingly cheating on him once the two fall in love, leaving her with the decision of whether to go back to him or not. Richard & Francesca are the couple that are getting married, trusting their friends and family to prepare their dream.

Performances – Bruno Todeschini in the leading role shows that he can show the struggle he is going through with the decisions in the film. Alessia Barela like wise show that her character will be put in a hard place with what is happening. The rest of the cast only have small roles which are not given a chance to make the most of their performance.

Story – The story here follows two strangers that must work together to prepare a wedding, only for the to fall in love and spend the seven days together having an affair before being left to decide what to do next. This is one of those affairs based movies which isn’t the most interesting thing to watch as we get to see how the couple fall in love without a care in the world and both know the reality of how difficult life would be if they wanted to stay together. This doesn’t really do anything new to an affair based story which only ends going just like you would imagine.

Settings – The film is set on a Silicon Island which does make a beautiful backdrop for the film. we do get to see how the island does feel lived in and does need improvement for a wedding.

Scene of the Movie – The wedding.

That Moment That Annoyed Me – Nothing we haven’t seen before.

Final Thoughts – This is a basic affair movie without being anything we haven’t seen before, it gets the basic right without testing the audience enough. 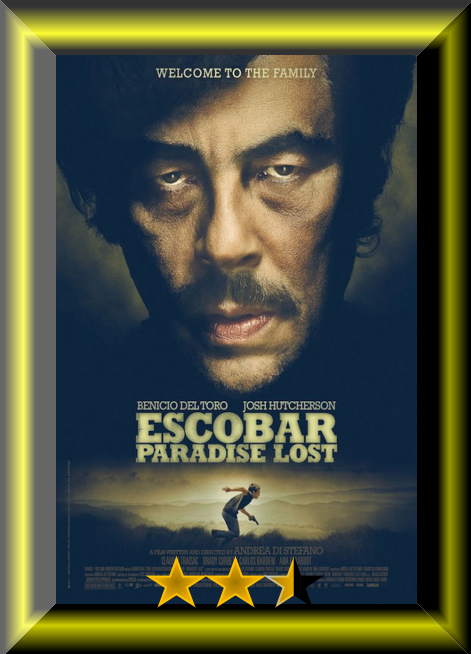 Plot: In Colombia, a young surfer meets the woman of his dreams – and then meets her uncle, Pablo Escobar.

Story: Escobar: Paradise Lost starts as Canadian surfer Nick (Hutcherson) has moved to Columbia to start a business with his friend Dylan (Corbet) giving surfing lessons, he meets a beautiful local woman Maria (Traisac) falling in love along the way, only to learn that her Uncle is Pablo Escobar (Del Toro).

Nick does get welcomed into the family with what starts as a friendly welcome from a political figure, but soon Pablo shows the darker side, which both Nick and Maria want to escape from, but know if they run, they will end up like most of the victims against Pablo, dead.

Characters – Pablo Escobar is the know criminal drug lord, here we meet him as a family man first, who will always welcome honest people into his family before showing his darker side, which will show how deadly it is to cross the man, with his ability to strike fear into the people of Columbia. Nick is a surfer that just wants to live in paradise, where he meets a beautiful woman, only he gets drawn into the life of crime by her uncle, where he is torn between going through with crimes or risking his own life. Maria is the woman that Nick falls in love with, they both want to enjoy the paradise they are living in, even if her Uncle has deadlier plans.

Performances – Benicio Del Toro is strong in the leading role and shows the emotionless state of mind of the crime lord, while Josh Hutcherson does show us just how desperate his character become through the situation he finds himself in. the rest of the cast are fine without needing to do as much as the leads in the film.

Story – The story here follows a surfer that finds himself working for crime lord Pablo Escobar against his will after starting to date his niece. The story does show us how innocent the romance starts out being, your typical boy meets girl, before it shows how much control Pablo Escobar had on everyone around him, striking fear into anyone that was against him by killing anyone he didn’t like. We see how Nick is trying to find a way out of this hell, to be with the love of his life and the consequences of being in this world. The first half of this story is slow moving, but once Nick is given his assignment, things get a lot more intense.

Crime/Romance – The romance side of this film is your typical boy meets girl, it is all sweet until he meets the family, which does show us the crime world that we are thrown into under the crime lord who isn’t afraid to kill people, including family.

Settings – The film does use the backdrop of Columbia well, it shows that the paradise would be a beautiful place to wake up to and how the deals could happen without people knowing.

Scene of the Movie – Nick’s mission.

That Moment That Annoyed Me – The slow first half.

Final Thoughts – This is a crime thriller that starts slowly but once we hit the half way mark it becomes edge or your seat battle between Nick and Escobar’s men.

Overall: Could have been saved with a stronger start.