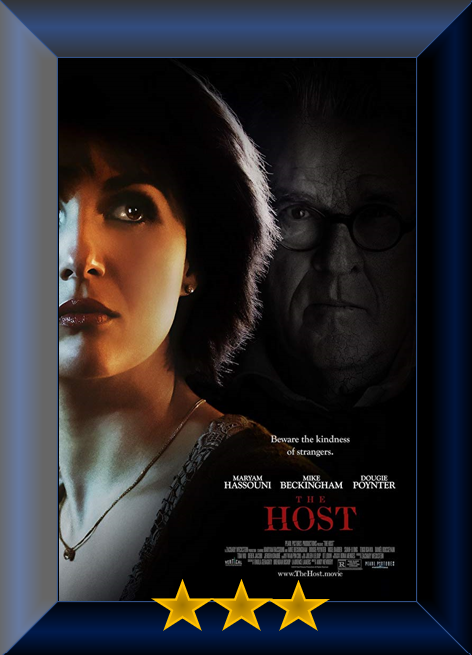 Plot: A opportunity arises for Robert Atkinson, a London banker who risks his bank’s money to leave the mundane behind to start a new life.

Story: The Host starts as we meet down on his luck Robert Atkinson (Beckingham) who has filled his life with bad decisions, including an affair with a married woman, stealing from his bank and gambling with money he doesn’t have, facing even more trouble, he gets offered a deal to make a delivery to Amsterdam.

Once in Amsterdam, Robert finds what seems like a simple delivery, taking a turn when DEA Agent Herbert Summers (Barber) picks him out and Robert is caught in the middle of completing the delivery or jail or something way worse.

Thoughts on The Host

Characters – Robert Atkinson is a banker that has spiralled out of control, he steals from work, gambles with money he doesn’t have and has cut ties with most people in his life. To get out of his problems, he is offered a delivery job, one that will clear most of his debts, it seems simple enough, but it does take a turn for the worse for him. Vera Tribbe runs the accommodation that Robert stays in, it is a giant house that is filled with secrets behind her welcoming nature. Steve is Robert’s brother that has tried to help him get back on the right track, no matter what he has done in the past, he will help him through the toughest time. Herbert Summers sees the delivery Robert is on and looks to use him to get what he needs in the battle against the gang running deliveries around the world.

Performances – Mike Beckingham takes the leading role, showing us just how desperate his character has become, Maryam Hassouni is the star performer in the film with her truly dark turn, where Dougie Poynter, Nigel Barber and Suan-Li Ong giving strong supporting performances too.

Story – The story here follows a man who is down on his luck making a deal with a gang leader to make a delivery to clear his debts, only for this simple task to take a very dark turn. This does start out looking like it will be a routine crime thriller with somebody needing to clean up their debts, we get the mix Robert getting stuck in the middle of the criminals and the law. This story does take a big twist, which will surprise and go in a very different direction which is shocking to see. The story does try to blend the two together, but does struggle though because we focus on the crime side dragging us in, only for most of this to get forgotten through the horror side, which does take over the second half of the story.

Crime/Horror/Mystery – The crime side of the film does feel routine for the most part, only this takes the back burner once the horror side of the film is unleashed, which is surprising by what happens.

Settings – The film is mostly set inside the mansion like house in Amsterdam, the house shows us the mystery with the size, the secret rooms and the eerie feel to it.

That Moment That Annoyed Me – The crime side of the story does seem to get forgotten once the horror comes out.

Final Thoughts – This is a crime thriller that is covered with a big horror twist to everything going on which is nice, only it does seem to get stuck in the middle of both sides.

THE HOST is available on demand from 17th April 2020 http://www.thehost.movie/