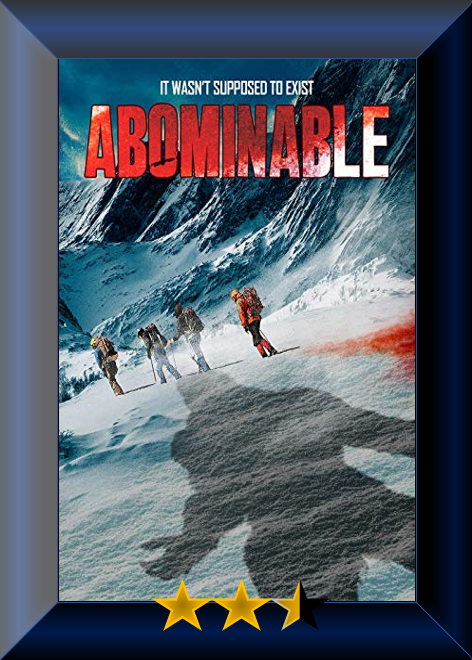 Plot: A research team embarks on a journey to obtain a plant that can advance medical research by centuries. While stumbling upon clues of the previous expedition, they discover that a Yeti creature lurks within the Himalayan mountains and will do anything to protect its terrain.

Story: Abominable starts as a research team led by Dr Smith (Gordon) arrive at the research facility to find empty and destroyed, the rest of the team including Sarah (Mattson), Pete (Moy) and soldiers start searching the surrounding area to clues to what happened, as we see the previous team getting picked off by a yeti.

As the team continue trying to complete the research, which would have medical advances beyond their imagination, they find themselves getting picked off by the yeti, how much will they end up risking to change history.

Characters – Dr Smith is the one leading the team in search for the potential cure, she finds herself being kept hostage by the one person that wants more than the cure, she is motivated to find answers because of her illnesses, Sarah is the best friend of Dr Smith, she has followed her on her work, knowing it is for the right reason, trying to keep her safe, working with Pete to use technology to keep the surrounding area safe. Robert is the military man that is watching over Dr Smith, only he has his own reason for being on this mission.

Performances – When it comes to the performances, we get the four main performers, they are doing the normal wonder around the woods, giving the back story well, but don’t fill you with the fear they might be experiencing during the events of the film.

Story – The story here follows a research team as they look to uncover the truth about what happened at a research facility and finish the job, only to find themselves being hunted down by a yeti. With the story here we do have the idea of going to a remote location for scientific reasons, which will lead to a creature of sorts coming after them, balancing science with life, it is a tried and tested formula that works for horror, you just need to make your own characters with different motivations. The story might well feel routine, it does have a few twists along the way and plays out how every single film of this style would. Easy to watch, you know what you are getting, just enjoy it.

Horror – The horror comes from the yeti attacks, well they are violent, they do seem to lack the scare factor a 7-9ft creature should give somebody.

Settings – The film is meant to be set in the Himalayan mountain range, we are just in a random woodland area, which just doesn’t give us the location feeling in anyway during the film.

Special Effects – The effects in the film are strong with practical injuries being inflicted looking gory as they should.

Scene of the Movie – Bob versus the yeti.

That Moment That Annoyed Me – You never feel like you are on location the film is meant to be set in.

Final Thoughts – This is an easy to watch horror that does everything by the book without being as scary as it should be.