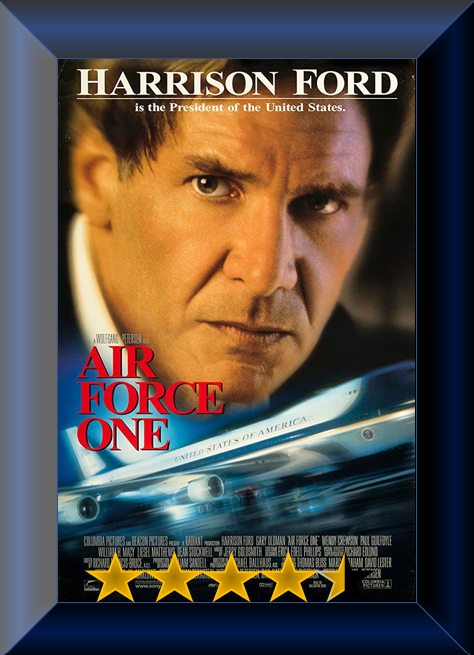 Plot: Communist Radicals hijack Air Force One with The U.S. President and his family on board. The Vice President negotiates from Washington D.C., while the President, a Veteran, fights to rescue the hostages on board.

Story: Air Force One starts after America has led an attack to bring down one of the world’s most dangerous terrorist, President James Marshall (Ford) gives a stirring speech about not talking to terrorist in Russia. Returning home on Air Force One, the President, his family and his staff on board, find themselves being taken over by a Russian military group led by Ivan Korshunov (Oldman) who wants the terrorist released.

Thoughts on Air Force One

Characters – President James Marshall is a former soldier that has always managed to use his reputation of speaking and acting from the heart lead his actions. He has just declared war on terrorism with a zero tolerance of negotiating with terrorist, when his flight home is hijacked, forcing him into using his skills to save the plane and maintain the new policy bought in by the country. Ivan Korshunov is the terrorist that leads the hijacking on Air Force One, an extremist who wants his leader released, one that will die for the cause if he needs to, he will kill hostages every 30 minutes if he doesn’t get his demands met. Vice President Kathryn Bennett must run the operations from DC with the advice from remaining cabinet members who will do anything to keep the country safe. She must remain strong through the members trying to get their own agenda through. Grace and Alice are the wife and daughter of the President who are left on board the only reason he doesn’t leave, used as pawns in Ivan’s game.

Performances – Harrison Ford in the leading role is great because we know he is a top-level action star, while giving us a President that people could fully support. Gary Oldman as the villain is great for the era, he is completely over the top which works wonders the for film. Glenn Close does a great job keeping her and the situation grounded while the action happens in the sky. Elsewhere we do have a wonderful cast that all work very well for the film.

Story – The story here follows a group of hijackers that take Air Force One demanding the release of a known terrorist only for the President refusing to go down without a fight. This could easily just be branded Die Hard on Air Force One, which on the outside it can be, only we do get to deal with a lot more deeper because of political outcome of everything. This is an easy to follow action story and will show just how intense the situation will become if the President I caught in the middle of a hijacking situation.

Action – The action in this film does give us plenty of action on the plane with tight fights or gun fire, only being available on the plane we are on, which each starts to get bigger as the situation escalates.

Settings – The film uses two key settings, first Air Force One itself, which leaves us watching the helpless people hijacked with no easy rescue, while also showing us the DC side of the events as they look to remain in control.

Scene of the Movie – Get Off My Plane!

That Moment That Annoyed Me – While interesting to see, we don’t get enough of the political side of the events.

Final Thoughts – This is a high octane action movie which might well be Die Hard on a Plane, it works wonders for keeping us on the edge of our seats.

Overall: Edge of the Seat Action. 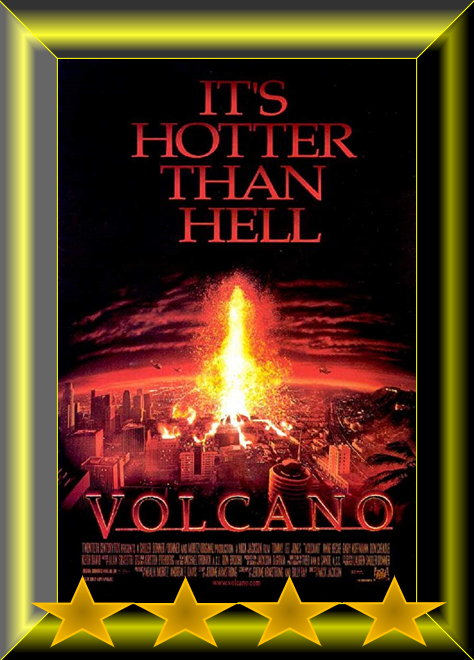 Plot: A volcano erupts in downtown Los Angeles, threatening to destroy the city.

Story: Volcano starts when a small earthquake hits LA, Michael Roarke (Jones) the director of the office of emergency management gives up his holiday with his daughter Kelly (Hoffman) to make sure everything is getting cleaned up without needing his help, with Emmit Reese (Cheadle) trying to cover for him.

Needing an expect Mike turns to Dr Amy Barnes (Heche) who is an expert in geology and earthquake activities as they discover lava under LA and soon it erupts putting the whole city in danger and the race to save as many people as possible is on. 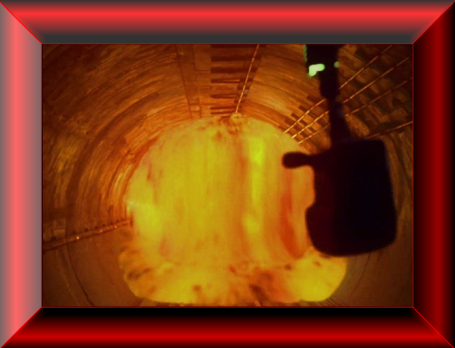 Characters – Mike Roark is the director of the office of emergency management in LA, he has been through a messy divorce, giving him less time with his daughter and is a workaholic. He is spending his vacation with his daughter only a small earthquake leads him back to work, putting a strain on his relationship with his daughter, but when things start escalating, he will do everything to protect the city from more chaos, trying to save as many lives as possible. Dr Amy Barnes is a geologist who is used to facing the press, she leads her team in searching for the answers and will fill in the science that Mike isn’t away for. Kelly is the daughter of Mike, she is often a deer in the headlights type of teenager, never understanding how to get away from danger, though she does get to learn quickly when she is helping around the medical area of the disaster. Emmit Reese works under Mike, he secretly wants his job and is planning to take over one day, he learns in this situation that he isn’t ready for this role anytime soon.

Performances – Tommy Lee Jones in the leading role seems like a perfect choice, he is a man that can demand centre stage and needs to in this role, while showing he needs advice to make things right. Anne Heche handles to scientific role very well throughout, not coming off as a know it all character like she could have been made to look like. Gaby Hoffmann as the kid fills the role well, even if she isn’t written as well as they could have done. Don Cheadle is more in a commentary role which he is great to see in.

Story – The story here follows the emergency services and geologist working together to try and save the city of LA from an unexpected volcano that was laying beneath the city. When we look at the story we get the disaster elements where people need to team up to save the city from disaster, we see how they work together to find solutions with any troubles between people never being more than a little argument, no real human villains does make this feel more natural. It is nice to see a story that doesn’t over complicate anything too.

Action/Sci-Fi – The action is big, it comes from the erupts that hit when the people are trying to avoid getting hurt, we get more action from the plans to keep the city safe too. The sci-fi side of the film comes from just seeing how people could have been with science fiction behind it happening.

Settings – The film is set in LA, a place you wouldn’t expect to see a volcano erupt, it does show the chaos the locals will be going through.

Special Effects – The effects are wonderful to see just how the destruction happens with the lava not stopping for much.

Scene of the Movie – The sound of silence

That Moment That Annoyed Me – Most of Norman’s scenes.

Final Thoughts – This is a fun disaster film that flows at a great pace, showing us just how people could work together to get over a problem they are all facing, with great acting throughout.

Overall: Disaster film that is a joy to watch.

Plot: In 1926, with her personal life in tatters and her writing in crisis, a young Agatha Christie decides to solve a real-life murder.

Tagline – Some people have a taste for murder..

Story: Agatha and the Truth of Murder starts as the great Agatha Christie (Bradley) is struggling with her latest novel, with the readers being able to guess who the killer or killers are, going through a divorce, she isn’t willing to sign.

When one of her fans Mabel (Haywood) visits, she asks Agatha to try and solve a real crime on a train, one the police can’t figure out, seeing this as a way to get out of her writers block, she goes to attempt to solve this crime, with suspects that could come out of her own novels. 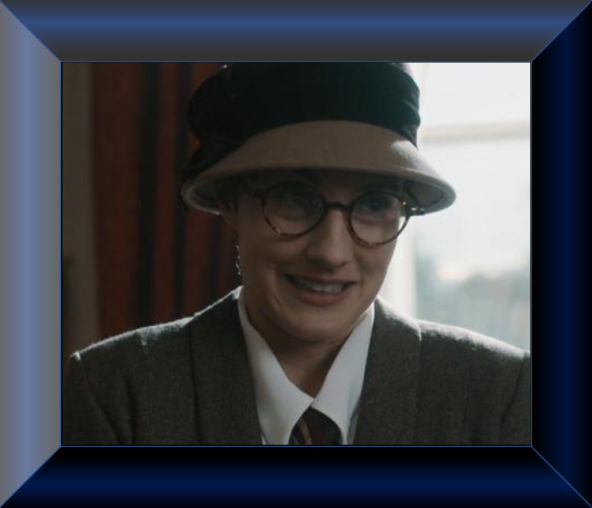 Thoughts on Agatha and the Truth of Murder

Characters – Agatha Christie is the great author, whose murder mystery novels have the large following, she is struggling to find motivation with her latest novel because her readers can guess the impossible killer. Her personal life is falling apart too, with an unlikely visit giving her a chance to experience solving a real murder. Mabel is the woman that comes to Agatha for help solving her friend’s murder, one that could have suspects from every angle of her real life, she gives her the information and joins in the trying to solve the crime. Detective Inspector Shore is the only real police involved in trying to solve the case, as other members of the gathering start getting killed, as the finger pointing increases.

Performances – Ruth Bradley in the leading role is great to watch, diving into the role of the legendary author. We have a host of British talent in here with Ralph Ineson, Tim McInnerny and Blake Harrison filling out the cast well showing the talent within the country.

Story – The story here follows the mystery behind Agatha Christie missing 11 days, which have never been explained, showing how she escaped the troubles in her life, to solve a real murder. This does turn into a murder mystery that could have come out of the novels of the author, which will keep us guessing like the detective, in this case herself. We do get glimpses into the real life troubles Agatha was going through, it also shows that post-war life that does have people suffering in private and shows moments of heroism that they achieved in war. If you like a murder mystery, this story is an easy watch that could be enjoyed by all.

Crime/Mystery – The film sees Agatha Christie becoming the detective, like her creations to try and solve murder, with plenty of suspects to keep us guessing along with the mystery.

Settings – The film here is set in a big house, which shows how the rich would be looking to get the money from the deceased, showing how they are more comfortable in the upper class of society.

Final Thoughts – This is an enjoyable murder mystery that does keep us guessing while taking a fresh approach to how Agatha Christie might have gotten her inspirations.