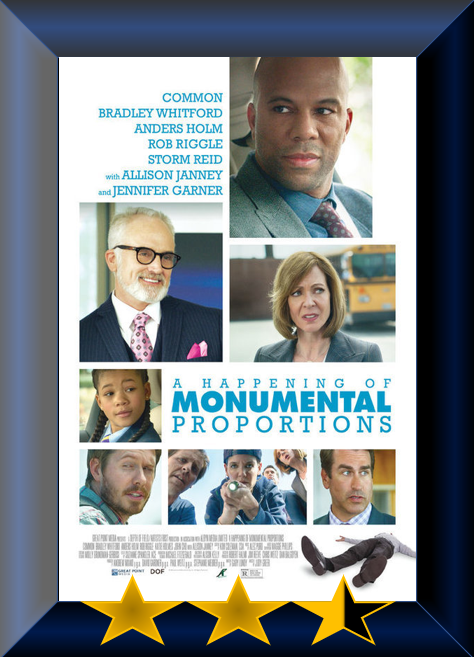 Plot: During the course of one day, a group of students at a school in Los Angeles find themselves caught up in a plot of sex, lies and dead bodies.

Story: A Very Bad Day starts when staff at a high school Principal Nichols (Jenney) and Mr Pendlehorn (Riggle) discover a body on the school, needing to move it before the student turn up. Outside of the school single parent Daniel (Common) sees his affair exposed by the husband Bob (Reeves), all in a working day.

When the events of the day seem to get mixed up the many different people we meet, teachers, students and parents see this being on of the bad days of their lives.

Thoughts on A Very Bad Day

Characters – Daniel works for a publishing company, he is a single parent preparing to talk at his daughter’s career day, he also learns that the husband of the woman he has been having an affair with has learnt about them and wants to meet. Principal Nichols discovers a dead body on the school and wants to protect the school only to learn the problems with doing that. We get the school kids trying to understand love and the different teachers dealing with their day.

Performances – It is hard to judge the performances because we have such a big cast and nobody gets enough time to give a career best performance, everyone does well without shining to the top level. Everybody does get the laughs required though.

Story – The story here follows a day in lives of many different people who all connect, with most having bad days about everything going on today. This story does connect together well, though it doesn’t feel like this many different people having a bad day isn’t that normal, but we don’t get enough into the details of why everything is falling apart on the levels it could have. It does show how life can be difficult if things aren’t going your way. The big problem with the story comes from how the story doesn’t seem to end up the way it could, leaving most people looking left out.

Comedy – The comedy in this film shows how people can have a bad day can have a funny twist to everything.

Settings – The film does bring us to everyday locations which shows how easily life can see you having a bad day without warning.

That Moment That Annoyed Me – Not really going into Mr McRow’s problems, which seem much deeper.

Final Thoughts – This is an overcast comedy that just doesn’t give the massive cast enough time to show how bad the day is going for them.

Overall: Too big for its own ambition.

Why I’ve Picked this choice – Sometimes, I find myself watching certain films too often, Train to Busan is one of them, I have seen it countless times now, I do believe it to be the best zombie movie ever made, it has all the intensity of a non-stop action movies, with the deep character development of a drama, as we fully understand every character decision, be it the distant father, the arrogant businessman, the couple expecting a baby, the baseball team, etc, everybody is given enough time to flush out their character to make their big moment have an impact with the emotions running high, leaving you with a tear in your eye by the end of the film.