Plot: Inspired by classic film noir, Carson Phillips, an ex-football star turned PI, has a soft spot for a lady in distress.

Tagline – A Private Eye. A Public Murder. A Perfect Crime.

Verdict: Wishes it had the Style it Wants

Story: Eye for an Eye starts as we meet former American football star, turned private investigator Carson Philips (Travolta) who likes to gamble and help a lady in trouble, with his latest case bringing him back into battle against a mob boss Doc (Freeman), who offers him chances to walk away.

Carson wanting to help Jayne (Janssen) and her daughter Becky (Bleu Travolta) who is getting the blame for her husband’s death in the middle of a football match, one which injury don’t make sense.

Thoughts on Eye for an Eye

Characters – Carson Philips was once a star American footballer, who through away his career by gambling, he has turned to being a private investigator, where he gambles still on the side. His latest case will take him back to his home team, where he finds himself needing to solve a case which involves an old love and an old enemy. Doc is the local mob boss that will always win on the tables and get what he wants, he knows how the get the most out of the people in his life, offering them deals to get out of the debts they face. Miles is the doctor at a specialist hospital that will give the correct answers to get people to leave and once played against Carson on the football pitch. Jayne is the ex-love of Carson who has turned to him to help fix the accusations being thrown towards her daughter, even if his husband made her hated within the town.

Performances – John Travolta is the strongest of a weak performing cast who mostly all look bored delivering their lines. Having such a talented cast does leave us feeling disappointed in what they have to work with.

Story – The story here follows a private investigator that returns to a town where he once was a star football player, only to find himself in the middle of a bigger issue that shows a crime that he must solve before it gets deadly. This does play out how you would expect in a mystery, it gives us clues which sends Carson to each different location, with each location then sending him to a new place, slowly unlocking a new location or suspect, it might well all add up, which is fine, only it just doesn’t get an intense as it could have.

Mystery – The mystery in the film is what Carson finds himself trying to solve, it doesn’t feel like one that is meant to be as interesting as it should have been.

Settings – The film does give us a town where you can see everybody knows everything about each other, with each building being used to show us the unique style for the town.

Scene of the Movie – Miles secret.

That Moment That Annoyed Me – Nobody really looks interested in being here.

Final Thoughts – This is a simple, slow and lacks the style it could have done with to make it stand out more, as the actors don’t look interested.

Vivarium will be available for digital on all the platforms below from Friday 27th March 2020. 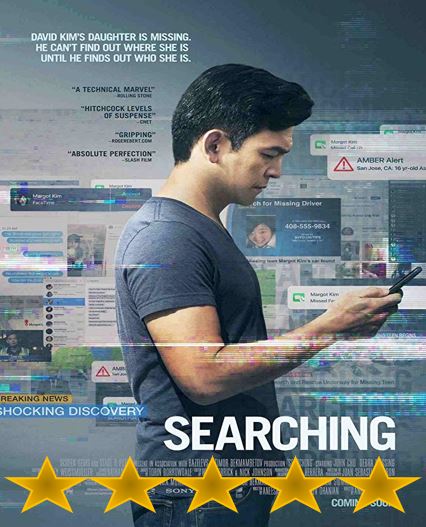 Why I’ve Picked this choice – Searching brings us one of the most original ideas in film, using the modern technology to help bring us an investigation movie that follows a desperate father, try to figure out what has happened to his daughter after she suddenly goes missing, with the whole film being shot as if we are watching somebody on a computer screen. The story is intense, because we have plenty of twists and turns along the way, with the ideas that you won’t always know what is happening in your child’s life and by the end it will leave you shocked.