For marine biology student Siobhan (Hermione Corfield), it was supposed to be a research excursion with a trawler crew fishing the West Irish seas. But when they hit an unseen object and become marooned, a mysterious parasite infects their water supply. Soon the oozing force infiltrates the entire vessel and turns Siobhan’s journey into a claustrophobic fight for survival. Can they stop the mysterious water borne parasite from spreading before it’s too late? Sea Fever also stars Dougray Scott (Hitman) and Jack Hickey (Game of Thrones). Written and directed by BAFTA© winning Irish filmmaker Neasa Hardiman (behind BBC triumph Happy Valley and Netflix hit Jessica Jones).

The Iron Mask on Digital from 10th April

The Beast on Digital 6th April

After the mutilated body of a missing girl is discovered in tidelands, Korea is shaken. Han-soo (Lee Sung-min: The Spy Gone North) and Min-tae (Yoo Jae- myung: Stranger) – who have been rivals for years – are put in charge of finding the culprit. The case seems simple with a suspect already in custody, but things take a turn when Han-su meets an informant who insists that he knows who the real murderer is. As cover-ups and secret deals ensue, tensions rise between the two detectives and the mounting pressure comes to a head.   Also starring Daniel Choi (Traffickers), with music from the visionary composer Mowg behind I Saw The Devil and Burning. The Beast is a compelling true crime style murder mystery.

Major Harry Smith (Travis Fimmel, Vikings) and his company of 108 young and inexperienced Australian and New Zealand soldiers are fighting for their lives in the Battle of Long Tan in 1967. With 2,500 battle-hardened Viet Cong soldiers closing in, their ammunition running out and casualties mounting, each man searches for the strength to triumph over an uncertain future with honour, decency and courage. Also starring Luke Bracey (Point Break), Richard Roxburgh (Van Helsing), Nicholas Hamilton (It) and Daniel Webber (Escape From Pretoria). From the writer of Collateral and Pirates of the Caribbean, Danger Close is beautifully scored by award-winning composer Caitlin Yeo. 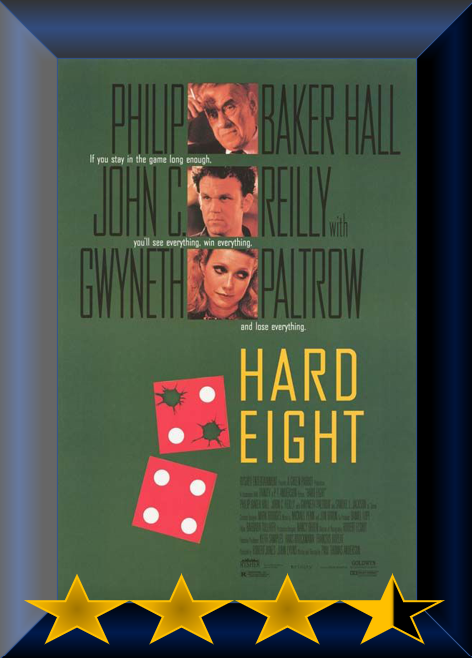 Plot: Professional gambler Sydney teaches John the tricks of the trade. John does well until he falls for cocktail waitress Clementine.

Verdict: Slick, but Not Glossy

Story: Hard Eight starts when Sydney (Hall) sees John (Reilly) looking dejected outside of a diner leaving Vegas, Sydney offers to give him 50 bucks to return and learn of him how to make the fortune he always wanted.

Two-years later John works with Sydney with connections including Jimmy (Jackson) that know how to work the casinos, with Sydney always making himself presented in a proper way, while John falls for a cocktail waitress Clementine (Paltrow) which sees the partnership start to hit a couple of stumbling blocks.

Characters – Sydney has been around the casino scene for years now, he knows how to pick out the people that could help make him more money and in John, he sees his latest target. He does have a good thing going, he makes sure he knows the staff and knows how to clean up any messes that come his direction. John is a dejected young man that is on his way out of Vegas needing to make enough money for his mother’s funeral, he gets a helping hand from Sydney are learns getting himself into a comfortable life, until he meets Clementine, where he starts to make mistakes which put the whole operation in doubt. Clementine is a cocktail waitress that is desperately trying to get enough money to clear her problems, she is willing to go to extreme levels for this, which sees her putting partnership between Sydney and John in the air. Jimmy the reckless man that has worked with John before, Sydney doesn’t like him and his behaviour doesn’t help his case.

Performances – Philip Baker Hall is fantastic in the leading role, he is either in or narrating nearly every scene and does manage to dominate every time he is on camera. John C Reilly plays everything he needs to well, showing his naïve nature at times and how he got to the right position, keeping the nervous nature coming through. Gwyneth Paltrow great too, while Samuel L Jackson brings the character that does seem like he is on edge to life too.

Story – The story here follows an veteran of the casino scene that knows how to pick out the best people to get money without being caught cheating or using the casino for work, that is until things start to get out of hand. This story focuses on people rather than the way the two make money, which shows that not everybody is as clean as you think with secrets always being up people’s sleeves. This is an interesting story, though it never truly gets going on the levels other films might well have when it comes to dealing with the same subject matter.

Crime – The crime side of this film shows us just how the people operate on the other side of the law, which shows their own weaknesses to the world, while showing how they keep everything together.

Settings – The film uses the casino settings to show us how the shady people would be operating to make sure they stay on top of everything.

That Moment That Annoyed Me – We don’t really learn enough about what the bigger plan would be in the casinos.

Final Thoughts – This is an interesting story even if it doesn’t reach the top potential, it tries to be slick and apart from the standout performance from Philip Baker Hall, we don’t get enough from the deeper story involved.