Plot: A young Englishman plots revenge against his late cousin’s mysterious, beautiful wife, believing her responsible for his death. But his feelings become complicated as he finds himself falling under the beguiling spell of her charms.

Tagline – Did she or didn’t she?

Story: My Cousin Rachel starts when young man Philip (Claflin) gets letters calling for help from his close cousin Ambrose about his wife Rachel (Weisz) he goes looking for answers, only to learn that his cousin has died, believe Rachel was the cause of his death, he invites her to the family home.

When Philip starts spending time with Rachel, he learns of a different side and even starts to fall in love with her, this offers him a chance to learn about the tragic story of her previous love, showing his early feelings against her were misled.

Thoughts on My Cousin Rachel

Characters – Philip spent his life with his cousin until he got married moving away from him, only communicating through letters, become concerned about his cousin he searches for answers which gives him bad news and a new look on life, even if his jealously can cause his own problems. Rachel is the mysterious cousin’s wife that comes into Philip’s life after her husband’s death and soon she doesn’t seem like any of the letters created her to be. When we look at the rest of the characters none make an impact with Louise being a family friend who offers advice, while Kendall is the guardian trying to advise Philip.

Performances – I can’t complain about the quality of acting in this film, Rachel Weisz and Sam Claflin are both strong in their roles without hitting the full levels that show us just how far their characters will go. As for the supporting cast they are mostly fine, they really don’t have enough to do to stand out in this film.

Story – The story follows a young man trying to figure out just what happened to his cousin, with the only living connection to him being Rachel to whom he falls wildly in love with. This plays out like a mystery which is the interesting side to the story, though it falls into forbidden love that never really connects on the levels it was hoping too. The story doesn’t feel as dark as it should, it focuses way too long on the romance or any of the mystery to stand out and teases too long into the sanity of Philip over the mystery. The other clear frustration with this story is that we focus too heavily on rich people having too much money for their own good.

Mystery/Romance – The mystery comes from not knowing just what is going on for the most part, it never connects us enough to know the truth because the romance overshadows everything when it clearly doesn’t feel real or need to be that upfront.

Settings – The film keeps us in the rich society setting, which frustrates because we know they have too much money for their own good.

That Moment That Annoyed Me – The romance doesn’t work.

Final Thoughts –This is a mystery romance that doesn’t connect enough on either side, it falls flat and ends up feeling like something we could have skipped.

Overall: Romance without the sparkle.

Plot: Inspired by the true events of a couple vacationing on a remote island in the Bahamas who are hunted by a group of modern-day pirates, after their identities and their lives.

Story: Isolation starts with a holidaying couple Max (Purcell) and Nina (Avgeropoulous) who get chased away by a local in William (Lang). We move onto follow another couple Creighton (Malby) and Lydia (Helfer) who are trying to put their marriage back together after his mistake, he takes her to a remote island to relax and enjoy.

Creighton and Lydia get welcomed by William and his wife Mary (Church) who invite them over for dinner, but during the dinner their apartment gets robbed and they find themselves with nothing, needing to search for help to survive.

Characters – Creighton is the successful businessman that has made a terrible error in his marriage, he is trying to in his wife’s heart back and her trust, he takes on her the holiday on the remote, he is doing everything he can, he knows how much he messed up and will need to prove this in the fight to survive here. Lydia is the wife that has seen her marriage destroyed by her husband, she is willing to give him one more try though which is what we see her going through on the holiday. Max is one of the neighbours on the island, first chased off, but soon welcoming the couple with his partner Nina. William along with his wife Mary also live on the island and have chased people off before, but he welcomes Creighton and Lydia as he enjoys the life in paradise. We are left to guess which couple is the pirates here, which is interesting even if the outcome is more confusing.

Performances – The performances are mixed here because you have some big named talent which the film is advertised on, with Stephen Lang and Dominic Purcell, they are both fine in what is supporting roles. it is Luke Malby and Tricia Helfer that are the main leads and never get out of the blocks because while they have an interesting problem, they still are forced into silly decisions.

Story – The story here follows a couple trying to fix their marriage on a remote island, only to find themselves needing to fight to survive against pirates who want to steal their identities. The problems mount up early in this film, first the opening scene only confuses, the second comes from their only being 3 couples and one needs to be the pirates, much like ‘A Perfect Getaway’ this movie falls into the position of just trying to keep you guessing on one couple, only to pull the rug out, only this one doesn’t even give you the rug, it points directly at one couple then decides to go, nah, it’s the other one. there is way too much talk and bonding moments between the couple’s which doesn’t need to be here. The only interesting side of the story comes from Creighton and Lydia trying to fix their marriage, only this gets forgotten in the film too.

Action – The action is most chases and fights that are badly edited to make them feel like if you blink you might miss something big.

Settings – The film does use the settings to its advantage, by having it set on a remote island with no phone signal, creating the isolation needed. 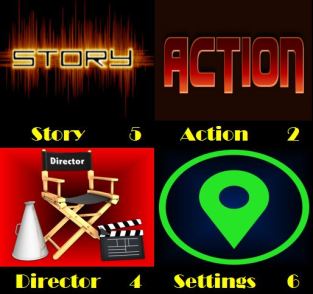 Scene of the Movie – Sharks.

That Moment That Annoyed Me – The running.

Final Thoughts – This is a weak rip off, of A Perfect Getaway that did this story so much better, in a shocking way too, it has bland characters and story that doesn’t seem to go anywhere.

G.I. Joe: The Rise of Cobra

Why I’ve Picked this choice – When this movie came out I couldn’t get enough of it, it is a pure silly popcorn action film, it is directed by Stephen Sommers who bought us The Mummy, which was an automatic selling point, as I am a fan of all of his films, being Deep Rising, Van Helsing or Odd Thomas, I like his style and this is a film that continues his flare for action. It might well be your typical America to the rescue storyline, but it works with ease, as I don’t know anything about the original action figures the characters are meant to based on. We do also have a wonderful cast, that lets everybody play to their strengths and even though the most part of the critic world didn’t enjoy it too much, you can just have fun with this one.