Plot: An American Civil War veteran embarks on a journey to rescue his niece from the Comanches.

Story: The Searchers starts Civil War soldier Ethan Edwards (Wayne) visits his brother in a small Texan house, when he goes to investigate a local incident his family is butchered by Comanches, with them kidnapping the 9-year niece.

Ethan is joined by Martin Pawley (Hunter), Rev Samuel Johnstone (Bond) and other men looking to revenge, who are tracking down the Indians that butchered the family in search of their lost relative 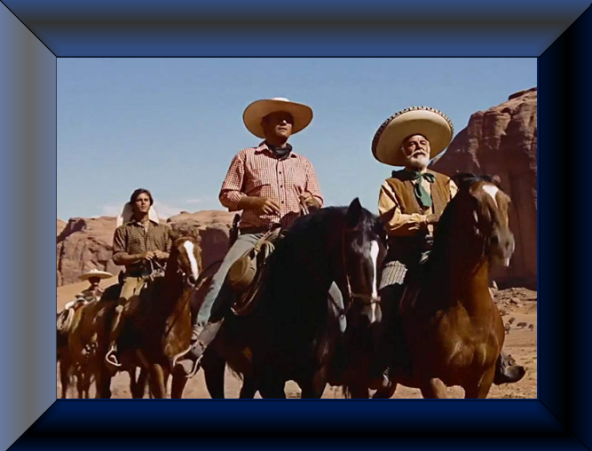 Thoughts on The Searchers

Characters – Ethan Edwards is a celebrated Civil War Solider that after the war ends still holds a grudge against the Native Americans, when his family is butchered, he leads the hunting party towards them, determined to find the remaining family members, which will take him years. Martin Pawley is the young man that wants to help Ethan, despite the fact he doesn’t want help, he will leave the love that is under his nose to go on this risky business. Laurie Jorgensen is the love of Martin’s, she has always waited for him, supported him and wants him to stay back and not go on the rescue adventure.

Performances – John Wayne is the lead in the film and did what he always did, dominated the screen with his performance that you will know it is him. Jeffrey Hunter is the supporting role does well without getting too much time to outshine Wayne, while Vera Miles does perform well when she gets the screen time.

Story – The story here follows a former civil war solider that goes on the hunt for his enemies that have butchered his family and kidnapped his niece, an adventure that will take years for him to recover the truth. When it comes to the western story, we get a pretty typical idea for a story, the heroic cowboy needing to fight the ‘evil’ Indians or now Native Americans, this does everything that idea has given us without do much more around it. We really don’t get overly tested, but this formula was what worked for the release era, but just isn’t edgy enough for the modern audience.

Western – This is everything you would imagine a western to be, it would be listed under most searches and shows just how the battle between cowboys and Indians was perceived.

Settings – The film does bring us a couple of the most iconic movie sets of all time, with the mountain range always being something people will known.

Scene of the Movie – Over the ridge.

That Moment That Annoyed Me – Just way the cowboys look at the Native Americans.

Final Thoughts – This is everything you could imagine from a western, without testing the audience along the way.

Overall: By the book Western.

Why I’ve Picked this choice – Growing up on Pokemon it was only a matter of time to see a live action film that worked, step up Detective Pikachu, which brings us a son of a detective that must team up with a talking Pikachu to figure out what is happening in the big city, only the mystery will become deadlier than they could imagine. Ryan Reynolds as the voice of Pikachu is the reason why this works so well, he is flawless in the role and it does tackle the idea of not taking chances in life enough, this is a film that can get plenty of laughs and be enjoyed by everyone, getting better each time you watch it.