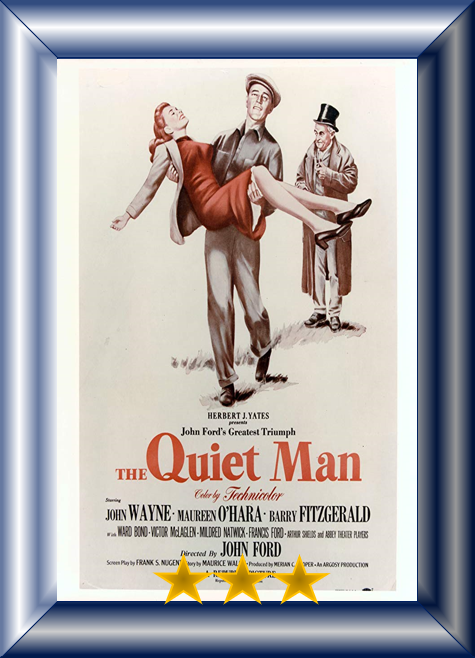 Plot: A retired American boxer returns to the village of his birth in Ireland, where he finds love.

Story: The Quiet Man starts as American Sean Thornton (Wayne) returns to Ireland, the place of his birth to return to his home to start a new life, it isn’t line before he meets the beautiful Mary Kate Danaher (O’Hare) falling in love, only he must deal with her aggressive brother Will (McLaglen) who won’t give them permission to be married.

As the village rallies behind Sean, the pressure is put on Will to let his sister marry Sean, giving the couple their chance to be together.

Thoughts on The Quiet Man

Characters – Sean Thornton has made his fortune in America, now he wants to return to his place of birth, to the home he was born in and start a fresh life, he happens to clash with a man in town, which also sees him falling in love quickly. He is running from his past, which is always holding him back to letting his new wife the truth about who he is. Mary Kate Danaher is the woman that Sean falls in love with, she has been living under her brother for years and now wants just one thing from their marriage, her money from her life before they got married, the money her brother won’t let her have. Michaleen is the local man that helps Sean around, fixing small problems, while enjoying his drink. We do get to meet plenty of the locals, including the brother that wants control of the village, the widow who has the most, the father and the reverend, both of who want to help Sean out. Most other character do fill your Irish stereotypes.

Performances – John Wayne is static as he ever was, he might have been a presence, but he doesn’t include any emotional range. Maureen O’Hare does bring us a colourful character, though it is one that that isn’t always around in modern cinema. Barry Fitzgerald gets plenty of laughs in his role in the film, while everybody is fine with what they have to do.

Story – The story here does follow a man coming from America in search of a new life in his birth town, only to find himself falling in love getting caught in the middle of a conflict between the biggest name in the village. This is a story that follows traditions which are completely outdated now and focus on just trying to get on with one’s life over money. It is about trying to start a fresh in life, something that will make people question your own actions. It plays out between two men fighting over something small, without needing to be getting into a big conflict.

Comedy/Romance – The comedy in this film does seem to focus more on Irish stereotypes over anything else, while the romance just seems to be man meets woman, there doesn’t seem to be much of a spark between the two.

Settings – The film uses a small Irish village and countryside for the locations, they work well for returning home and shows how the people will come together.

Scene of the Movie – The first arrival.

That Moment That Annoyed Me – The lack of chemistry between Sean and Mary Kate.

Final Thoughts – This is a dated comedy that just doesn’t reach the heights it did upon release, being held back too often by John Wayne’s lack of comic timing.