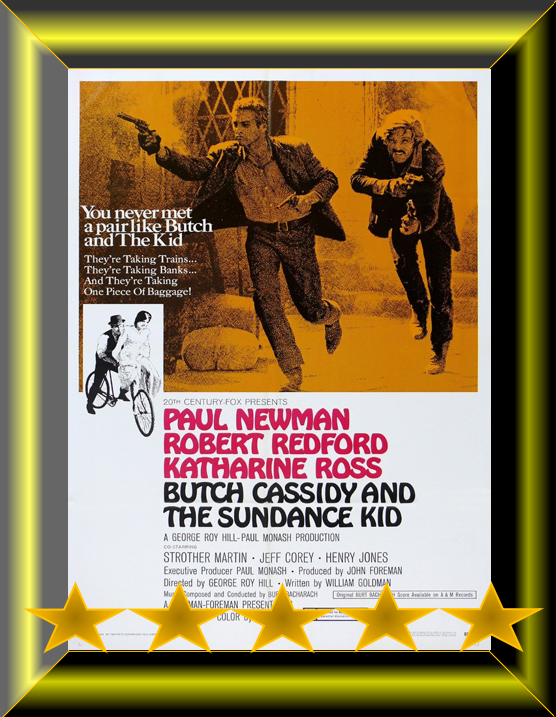 Plot: Wyoming, early 1900s. Butch Cassidy and The Sundance Kid are the leaders of a band of outlaws. After a train robbery goes wrong they find themselves on the run with a posse hard on their heels. Their solution – escape to Bolivia.

Story: Butch Cassidy and the Sundance Kid starts in the 1900s where Butch Cassidy (Newman) and his outlaws, including his trusted best shot The Sundance Kid (Redford) are looking for their next score, which sees them doing a double on the same train, the second robbery sees them needing to go on the run from ruthless bounty hunters.

Butch and Sundance go to their normal haunts to escape, which this time just don’t work, they look to head to Bolivia for freedom, only to learn that the toughest lawman and the best tracker are hot on their trail.

Thoughts on Butch Cassidy and the Sundance Kid

Characters – Butch Cassidy is the leader of the outlaws, he knows how to talk himself out of any situation, keep his gang in order and he won’t kill anybody unless the situation calls for it, he wants to not leave a trail of bodies behind him. The Sundance Kid is the quickest shot in the land, he never misses his target and is loyal to Butch. The pair together are a lethal combination that will get the robberies done is the most efficient manner. Etta the lover of Sundance, a school teacher who is still single at 26, which has already put her in a bad bracket for the society, she doesn’t get involved in the robberies, but does join them when they go on the run.

Performances – Paul Newman and Robert Redford are both fantastic giving career highlights in their roles, they have wonderful chemistry which shines through the film and helps on the adventure the two characters find themselves on. Kathrine Ross completes the main cast which sees her standing toe to toe with the male leads.

Story – The story here follows the notorious outlaws Butch Cassidy and the Sundance Kid who have been robbing banks for years until their latest job does wrong and sees them needing to go into hiding in Bolivia, with trackers and lawmen after them. This is one of the classic movies of all time, it does show one of the most famous outlaw partnerships in American history and we get to follow them when they are at the peak of their reputation, where they must deal with consequences of the people that want to end their robberies. Like most of the westerns for the time, we get the outlaws that come off charming for the most part, which does seem to be the way, lets make the criminals the popular ones and the lawman the villainous figures, sure the pair didn’t kill people and their reputation is key to how the country thought of them. It is a fun watch with comedy playing into how the story is told, which is fun to see.

Biopic/Crime – The biopic side of the film is how the film is loosely based on the real story behind the two outlaws, it shows us just how the two went on the run after getting caught too deep in the world of the crime that they had become famous for.

Settings – The film uses the settings to show us the world that the two men would be operating in, first the American side as well as the Bolivian side of their adventure. 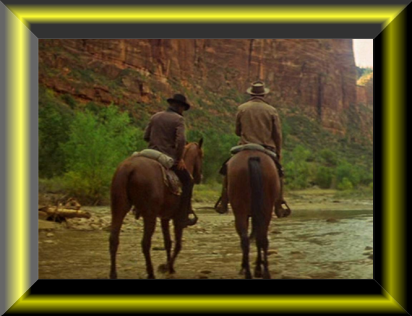 Scene of the Movie – The last stand.

That Moment That Annoyed Me – We could have learnt more about their robberies before the one that went wrong.

Final Thoughts – This is a fun western that shows us two of the most famous outlaws in the land, it has excellent chemistry between the leads and flows wonderfully.

Plot: Biopic of the iconic French singer Édith Piaf. Raised by her grandmother in a brothel, she was discovered while singing on a street corner at the age of 19. Despite her success, Piaf’s life was filled with tragedy.

Story: La Vie en Rose starts when young Edith is left in her grandmother’s care in her brothel where prostitute Titine (Seigner) becomes her best friend, she suffers here after becoming sick and newly losing her sight. Taken to the circus by her father, it isn’t long before the two find themselves alone with Edith showing signs of her singing ability.

At the age of 20 Edith (Cotillard) is singing on the street corners with her friend Momone (Testud) before she gets noticed by Louise Leplee (Depardieu) who offers her a chance to sing in his clubs, this is just the beginning of her career as a performer. Edith’s life never went a smoothly as many others because behind the scenes we had plenty of problems.

Characters – Edith Piaf is the famous French singer, she didn’t start on the top, we learn the struggles she faced, with her upbringing in a brothel and circus, before turning to the streets as a singer. Given the chance to perform on stage she never looked back when it came to performing, but she did enjoy partying which catches up with her as people try to control her rise to the top. Through the film we meet people that are important in Edith’s life, though one thing becomes clear, she doesn’t seem to stay around many people for too long.

Performances – Marion Cotillard won an Oscar for this performance, you can see why, she is fantastic cover multiply different years of the singer making each age seem realistic for the audience to understand the struggles she is facing next. Everyone else in the film is great, though most struggle to reach the complete level Cotillard achieves in this film.

Story – The story follows the life and career of performer Edith Piaf one of the most famous French singers of all time, we see how her life started with the battles to get out of the brothel and off the streets, to be where she belonged, on the stage, however many tragic events came her way. The story is told with plenty of time jumps between different ages which at times can be frustrating because this style of movie is often better to watch in the linear process, even if it is somebody looking back on life. Away from that little nit-pick, we see how amazing the story of Edith was with her final performance being the most iconic of all her songs.

Biopic/Romance – We get to see most of the important moments in Edith’s life with this story, the performances and the tragic moments.

Settings – Each setting used in the film shows us just how the film was able to recreate the location that would have been used for the real moments in the life of the singer, with the performances feeling like they would be where they would really have taken place.

Scene of the Movie – The final performance.

That Moment That Annoyed Me – The time jumps are off putting at times.

Final Thoughts – This is a brilliant biopic that shows just how talents Cotillard is and teaches us about a brilliant singer that will never be forgotten.