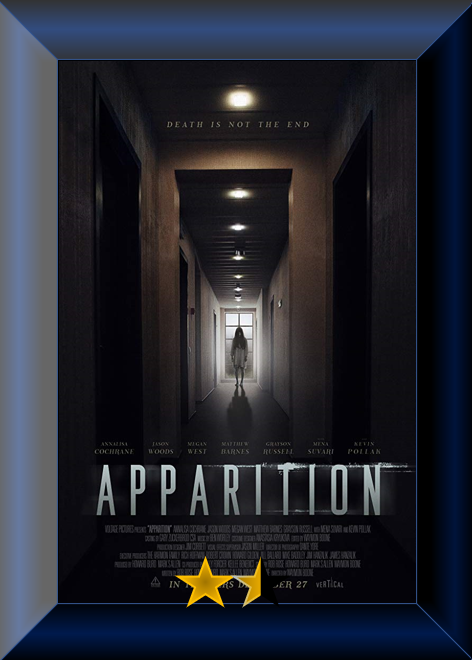 Plot: A group of young people, guided by an app which connects living with the dead, find themselves at an abandoned castle. A place with a horrific history tied to each of them, for reasons they’ll soon discover.

Story: Apparition starts as we see the horrific actions done by Warden White (Pollak) and his guards in a children’s correctional facility, move forward 20 years, the children of the warden and the guards, Taylor (West), Sam (Russell), Skyler (Cochrane), Derek (Barnes) and Nate (Woods) are celebrating a wedding, where Sam has created a new app which can communicate with the dead.

With the first journey taking the friends to find a lost necklace, a moment of happiness, only for the second journey taking Skylar back to the correctional castle, now abandoned, where it doesn’t take long before the group start splitting up and experiencing horror experiences that bring to life the truth about their past.

Characters – Anna is the housekeeper in the castle, she is meant to keep her mouth shut to keep a home for her child, only when she sees what is going on her position is put under threat. Warden White is very strict, he runs the correctional home where anything can go, which sees just how far he will let his guards go, 20 years later his son is about to get married and his is proud of this big day. Skyler is on the eve of her wedding day which is becomes clear she isn’t that happy with the man she is marrying, her journey takes her to the castle to learn about what happened to her father. Sam is the one that created the app, the son of the warden often considered the outsider of the group.

Performances – Mena Suvari is the biggest name in the film, she does start strong only for not being that involved in the film, much like Kevin Pollak who could have been a lot more menacing in the film. The rest of the cast just don’t get a chance to evolve their characters, which is the biggest problem in this film.

Story – The story follows five friends that start investigating an abandoned castle where their parents once worked only to learn the horrific truth about the history there. On paper this could have been an interesting story, it is based on the horrors that really happened, only for us to be thrown into a weak introduction to characters, who just spend about five minutes in a haunted location before it just being constant jump scares through noises, it might have an ending that makes sense, it is just getting there which is badly drawn out because we just don’t get enough focus on why the horrors happen, even though it can be explained.

Horror – The horror in this film is mostly just the friends walking around having lots of ghosts jumping out at them, it isn’t the most inspired style for horror to happen.

Settings – The film is mostly set in the castle correctional location, with first seeing what the boys were put through and secondly seeing what happens to the friends who visit the abandoned.

Special Effects – The effects are not strong either as they are used more for jumping out with creepy looking eyes.

That Moment That Annoyed Me – The characters are just dull.

Final Thoughts – This is a bad horror that doesn’t give the characters enough developments to justifying how everything unfolds leaving us shrugging our shoulders at anything that happens.

This is under D because of Daniel Day-Lewis in the film.

Plot: Christy Brown, born with cerebral palsy, learns to paint and write with his only controllable limb – his left foot.

Tagline – A film about life, laughter, and the occasional miracle.

Story: My Left Foot starts when Christy Brown is born, he has cerebral Palsy with only being able to use his left leg, his family can’t afford to give him a proper education, leaving him at home with his mother Mrs Brown (Fricker), when the family learn of his talent for writing and drawing with his left foot, Christy (Lewis) is allowed to leave the house to see people his own age, becoming popular in the neighbourhood.

When Dr Eileen Cole (Shaw) comes to help Christy live a more open life because of her work within the field of cerebral palsy, Christy gets the recognition he deserves for his work, a full gallery show. Christy would later go onto become famous for his work which proved that even with his disability he could achieve greatness.

Thoughts on My Left Foot

Characters – Christy Brown was born with cerebral palsy, he was believed to be a bit of a disgrace to the family, only to prove that he was able to make a career out of only being able to use his left foot to paint and write. He defies all expectations he lives as full of a life as anybody else. Mrs Brown is Christy’s mother that always supported him, no matter just how difficult it was to get through each day, she does worry that his fame can cause him difficulties, but sees him smiling is always keep her happy. Dr Cole helps Christy with his disability and shows him just how full of a life he can leave.

Performances – Daniel Day-Lewis is fantastic showing that he is the generations best actor, he is head and shoulders above the rest of the cast, who don’t do anything wrong in the film either.

Story – The story here follows the life and struggles to Christy Brown who managed to defy all odds and become one of the greatest artists of all time. If you ever want to see just what can be achieved by somebody that hasn’t always had everything go their way in this case, against all physical problems Christy faces, he manages to make great achievements. We do watch the film through a flashback of his story being told with a new nurse, which does show us just how he saw the world growing up and how he became so popular within the neighbourhood.

Biopic – The biopic side of the film is seen through the eyes of Christy and how he believed he was seen in the world, before he was embraced by it.

Settings – The film does show the small house that Christy was raised in and how close the family and neighbourhood become as he gets older.

Scene of the Movie – The gallery.

That Moment That Annoyed Me – It is only seen through Christy’s point of view.

Final Thoughts – This is a brilliantly acted biopic that shows how one man overcame what seemed like impossible odds to become one of the most famous artists in the world.