Plot: All unemployed, Ki-taek and his family take peculiar interest in the wealthy and glamorous Parks, as they ingratiate themselves into their lives and get entangled in an unexpected incident.

Soon after Ki-woo gets a job for the family, the Park family businessman Dong Ik (Sun-kyun) his wife Yeon-kyo (Yeo-Jeong) fill the roles of their trusted staff with Ki-woo’s family as they get themselves secure well paying jobs, but not everything is as it seems with the house.

Characters – Ki-taek Kim is the father of the unemployed family, he has always looked out for his family, while they search for their next meal, once the job opens up for him, he becomes the driver, proving to be a model employee. Ki-woo gets the first job as a tutor for the daughter in the family, he sees this as a chance to get to university, where he makes the plan for the family to get the extra jobs. Ki-jung is the daughter of the family that will become an art therapist for the family, while Chung-sook takes over the house as the maid. This family shows the poverty a family can be experiencing and just how far they would go to try and get out of it. The Park family has businessman Dong-ik who has always been patient with people, letting his wife do the hardest decisions in life, while supporting her always. Yeon-kyo is the wife that deals with the everyday routines in the house, she will do everything she needs to with the people she trusts, even if this does mean she can be taken advantage of.

Performances – We have incredible performances from the whole cast here Song Kang-ho in the leading role shines beyond belief in one of the performances of the year. Lee Sun-kyun and Jo Yeo-jeong give us wonderful supporting roles, with Choi Woo-sik, Park So-dam and Jang Hye-jin shining like the rest of the cast which is flawless throughout the film.

Story – The story here follows a poverty family that luck and con their way into secure jobs for one family, only to see everything spiral out of control in a story that highlights the lines between the rich and poor. This story is one of the most fascinating ones of the year, it does seem like it is going to be a simple enough story, but when everything goes out of control we get to see threads of the story unravel in every directions, see the highlights placed on the rich and poor divide, slowly chipping away at the poorer side of the family, as well as having the other incident going on (which does include too bigger spoilers). Much like ‘Shoplifters’ we see just how hopeless people can feel when they have no realistic future because money they can’t earn can’t give them an out. This is a perfect highlight of how to bring an original story to life, where the audience will be left to ponder what will happen next.

Comedy – The film is set up like a comedy which at times does work, with just how crazy certain moments are, though it doesn’t fall into a laugh out loud comedy.

Settings – The film uses the settings excellently, with the poverty sized house the family can barely not have some drunk piss on the window, to the wealthy businessman who has earnt his way to the top, the difference in lifestyle is drastic with the locations almost being a character of their own. 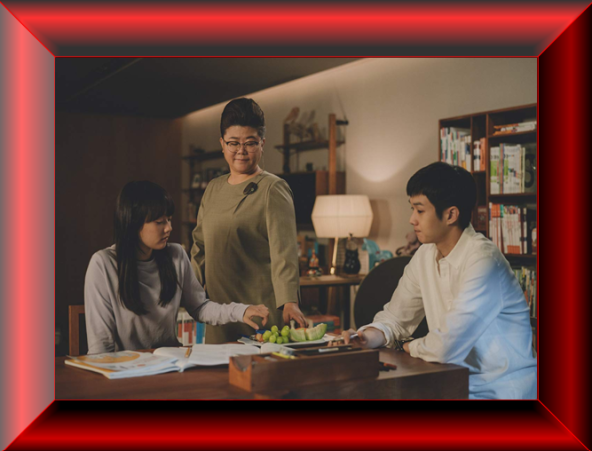 Scene of the Movie – Party time.

That Moment That Annoyed Me – Nothing.

Final Thoughts – This is one of the most amazing films you will see this year, it will shock you and give us an important message about the clash system in the world.