Plot: A man on the verge of a promotion takes a mysterious hallucinogenic drug that begins to tear down his reality and expose his life for what it really is.

Story: The Wave starts when a safe lawyer Frank (Long) is about to get a promotion, he co-worker Jeff (Faison) is trying to push him into partying a little bit more, instead of following his routine with his wife Cheryl (Minnich). When Frank decides to go along with a night on the town, he finds him at a party meeting mysterious strange Aelous (Flanagan) who offers him a hallucinogenic drug that sees him lose track of time.

Waking up alone in a random house, he finds his life falling apart, the big meeting not going as planned and simple journeys just randomly getting skipped, he needs to put his life back together before it is too late. 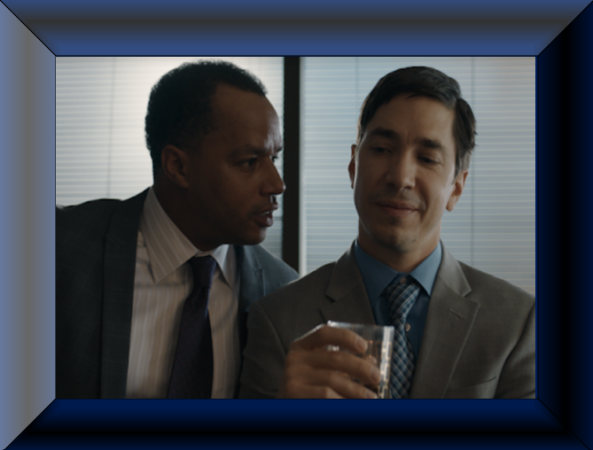 Thoughts on The Wave

Characters – Frank is a safe worker, he lives his life through a strict routine that never sees him taking any chances, deciding he needs a change he heads to a party, takes a drug and sees his whole life change overnight, needing to figure out what he has gained with his decision to take a drug which sees him lose time. Aeolus is the mysterious man that supplies the drug for Frank, he pushes him into taking the drug which he promises will be different than anything he has had before. Jeff is the best friend of Frank, he pushes him into going on the night out, wanting him to loosen up, only to show concern with what happened. Natalie and Theresa are two women that friends meet that give answers to what might have happened that night.

Performances – Justin Long is the star of this film, he can always make the routine based character shine and look out of water when they are pushed. The rest of the supporting cast are both strong without taking any of the spotlight of Justin.

Story – The story here follows a man that has lived his life with a routine until one night he agrees to let loose and party, only for things to get out of control and he finds himself losing his own sense of reality. This story is one that you do need to watch carefully or you will end up missing one of the key ingredients to the outcome, we are left to try and piece together each incident Frank finds himself going through, it does all make sense by the end too. The clear question in this story does come from the idea of how Frank goes from not doing anything questionable, to willingly taking drugs off a stranger. Outside this we can enjoy this story and how everything unfolds.

Sci-Fi – The sci-fi side of the film comes from seeing how Frank suddenly starts losing sense of reality and how everything in his life comes crashing down.

Settings – The film uses the settings to keep us moving around the different incidents that Frank finds himself in, with great transitions between them too.

Scene of the Movie – Boom a car chase.

That Moment That Annoyed Me – The sudden jump to unknown drugs seems to drastic.

Final Thoughts – This is a wildly bonkers sci-fi film that could sit next to Donnie Darko or The Butterfly Effect for mind being storytelling.

Overall: Wildly out there.