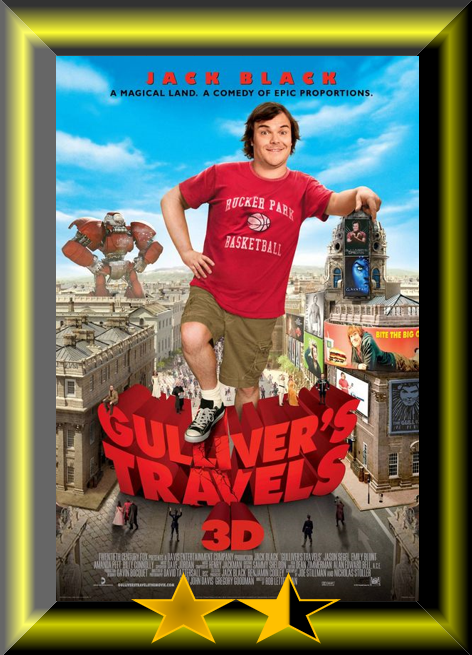 Plot: Travel writer Lemuel Gulliver takes an assignment in Bermuda, but ends up on the island of Lilliput, where he towers over its tiny citizens.

Tagline – A magical land. A comedy of epic proportions.

This trip sees him end up in Lilliput where he is giant compared to the residents including King Theodore (Connolly), the stuck up general Edward (O’Dowd) along with Princess Mary (Blunt) and peasant Horatio (Segel), in the land where Gulliver becomes a hero of the land.

Characters – Lemuel Gulliver has been living inside his safety zone, where he works in a mail room for a magazine, not looking to get out of the lowest level of the magazine, seeing people come and go through the office, he doesn’t have the guts to ask out the woman of his dreams, taking an assignment he has no qualifications to be part of. Gulliver travels to a new land where the people are tiny, where he starts a revolution taking advantage of their generous natures. Horatio is a peasant that has been locked up for trying to speak to the princess, who he loves and wants to be with, he is the one that helps Gulliver learn about the world he is now part of. Princess Mary believes she is meant to be marrying the man who earns her love, rather than being allowed to get to know the person. Darcy is the travel editor for the magazine that Gulliver wants to impress, she is willing to let people in the office have an opportunity to prove them.

Performances – Jack Black brings his routine of comedy which is too immature for this story, even if he can handle the heart to heart moments well. Jason Segel does all he can with his role, while Emily Blunt clearly decides to make this over the top because of how little she wanted to be part of the movie. Chris O’Dowd is arguably the only strong part of the film when it comes to the acting, knowing he is playing an over the top villain.

Story – The story is meant to show a slacker that travels to a hidden royal kingdom where the people are tiny, here he helps take the people to the next level of the lives breaking them out of their royal ways. The problem with the story, is that it is based on a classic, which would have the same themes, only for this one to make everything about pop culture references that have completely dated becoming almost insulting to everything that it could have been. The story could easily have been about a slacker that wants to start achieving more from his life, instead of continue to show how much of a joke he is.

Adventure/Comedy – The adventure side of the film does take Gulliver to a new land he would never have imagined getting too, though his nervous approach to travelling gets forgotten too quickly here. The comedy is mostly immature jokes that won’t get many laughs in anyway.

Settings – The film does start with New York before moving to Lilliput, the problem with the setting here is the lack of scale, one minute it is just a palace, the next it feels like a big village or city, we just never learn how big this world is meant to be.

Special Effects – The effects do look clunky with how the worlds are put together trying to create the fact that Gulliver is massive in this world.

That Moment That Annoyed Me – The comedy.

Final Thoughts – This is an insulting movie that just never reaches the heights it could when it comes to telling the incredible story of Gulliver’s visit to Lilliput like the book does, we end up with immature comedy that misses more often than it hits.

Plot: A band of kids embark on an epic quest to thwart a medieval menace.

Tagline – For kids who rule

Story: The Kid Who Would Be King starts as we meet bullied school kid Alex (Serkis) along with his best friend Bedders (Chaumoo), they get bullied by Lance (Taylor) and Kaye (Dorris), with one of the latest escapes leading Alex to find Excalibur Arthur’s sword.

Alex learns that he must follow in Arthur’s footsteps in the battle against the evil Morgana (Ferguson) that is looking to reign darkness on the world once again.

Thoughts on The Kid Who Would Be King

Characters – Alex is raised by just his mum, he gets bullied at school and is struggling through life with his best friend, this changes when he finds Excalibur and learns he is the true king that must build an army to fight the forces of evil. He must bring together his enemies and learn his destiny to fight. Bedders is Alex’s best friend, he gets bullied just as much as Alex and is interested in learning magic. Lance is one of the bullies, he likes to pick on the smaller classmates, which sees him targeting the pair, until he joins them becoming on of the nights. Kaye is the other bully, one that does seem to follow more than enjoy the bullying. Morgana is the evil that is looking to bring her reign of terror to the surface world once again, sending her armies out to get the kids. Merlin does guide the kids along the way, showing them what they could achieve and how they will achieve it.

Performances – For a film carried by the young cast of Louis Ashbourne Serkis, Dean Chaumoo, Tom Taylor and Rhianna Dorris, none of them let the film down like they could have, all being strong through the film. We do get a couple of big names that shine in the supporting roles too.

Story – The story here follows a young boy that learns that he is meant to be the next King of England, taking up the war of King Arthur against Morgana who wants to bring her reign of terror back to England. This is a nice spin on the King Arthur legend bringing everything to the modern world, showing how people can come together for the greater good, with the choice to make sure they bring a diverse cast, to prove this point even more. We do have a deeper story which shows how Alex is always trying to fill the void left by his absent father, trying to make something bigger of his absence. This story does feel very fun for the most part, which is the important ingredients required for this film.

Action/Adventure – The action is the fights against the evil, each one becomes bigger even if it doesn’t truly put the kids in the danger a real battle would. The adventure does take our kids on a journey they could never imagine across the UK.

Settings – The film uses the historical settings to show us where the legends of King Arthur would have happened, using them for the quest.

That Moment That Annoyed Me – It does feel about 15-20 minutes too long.

Final Thoughts – This is a fun family adventure film, it breaths new life into the King Arthur legend, life other films have failed too often with.