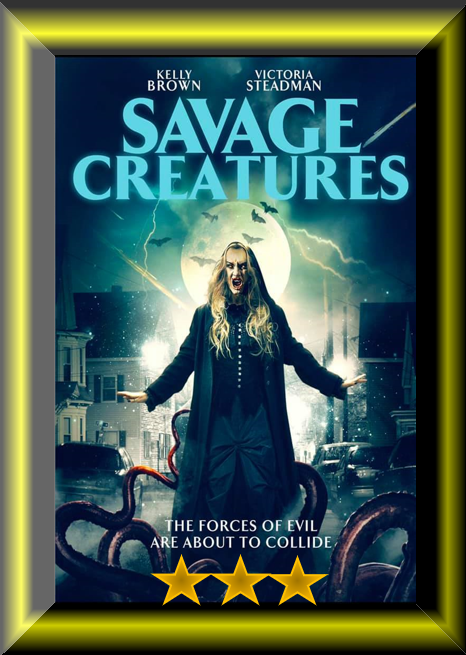 Plot: On the eve of Judgement Day, predatory cannibals abduct two young vagabond women harboring a shocking secret – they are ancient Vampires. Following a bloody clash, the Vampires are suddenly confronted with an apocalyptic crisis as soul-stealing alien creatures invade and attack humanity, turning their victims into flesh eating Zombies. The forces of evil collide in a cataclysmic battle for dominance.

Verdict: Cult Classic in the Waiting

Story: Savage Creatures starts as we see the two predatory cannibals Liz (Okada) and Darby (Adams) complete their last kill, for their next meal, when they stumble upon two young women Rose (Brown) and Ursula (Steadman), bringing them back to their home to make them their next victims.

Things take a turn when the two women show their true selves, they are vampires that travel around the world, they have their latest dinner, until the world starts to come to an end for everybody left dead or alive.

Characters – Rose and Ursula are two ancient vampires that have been travelling the world for centuries, they have seen the worst of times in human history and are prepared for almost anything that comes their way, except for the aliens, where they must show their survival skills. Liz and Darby are religious cannibals that have been taking victims for years, which they believe is the lords work, with their latest victims being Ursula and Rose. Father Cooper is ready for the battle against the undead that are looking for more victims and gets even more feared, when he learns about the girls.

Performances – Kelly Brown and Victoria Steadman as the vampire couple are fun to watch, they get to poke fun at the vampire world too, while the rest of the cast do well with what they need to do in the film.

Story – The story here follows a couple of cannibals that look to get their next victims, only for everything to get turned on its head when the world looks like it is about to end. This is a story that you think you know how it might go, only for it to keep going, bringing everything from the cannibals, vampires, aliens and zombies, that do work together in the film very well, without over staying the welcome. It does bring us an end of the world style film, that isn’t afraid to throw every potential horror villain or creature into the mix, in a fun way that just makes you want to laugh at how everything unfolds.

Horror – The horror side of the film does include many different types of enemies we would get used to seeing the genre, cannibals, aliens, vampires, zombies, while they might not be put into scary versions, they do show us that we are going to be facing enemies that can’t be killed with ease.

Settings – The film does give us a remote location, which does show us how every creature would be operating through the film, away from the view of people.

Special Effects – The effects in the film are low budget, they have a style which does work to help the film reach the cult status the film deserves.

Scene of the Movie – The Vampire turn.

That Moment That Annoyed Me – We could have had more from the Father Cooper character.

Final Thoughts – This is a fun horror that will have plenty going on and isn’t holding anything back from the audience and isn’t afraid to throw the blood at the screen.