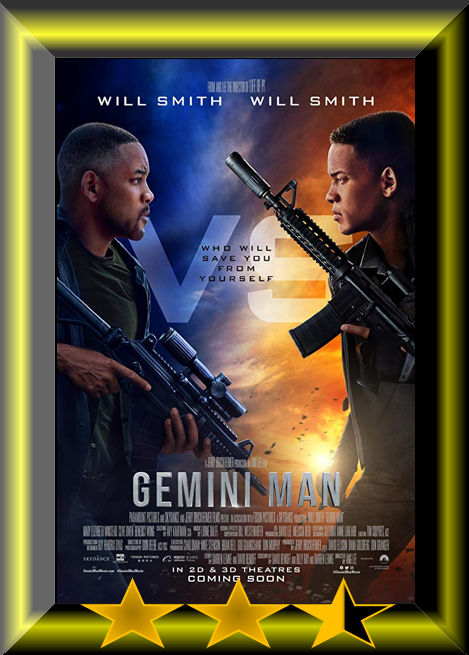 Plot: An over-the-hill hitman faces off against a younger clone of himself.

Tagline – Who will save you from yourself

Verdict: By the Books Action

Story: Gemini Man starts when government assassin Henry Brogan (Smith) is looking to retire after his latest job, but his latest job might not have been as clean as he thought, with the target turning out to be a specialist not a criminal terrorist. With his government turning on him, he meets rookie DIA agent Danny Zakarweski (Winstead) who was assigned to watch him, when they are all burned, Henry and Danny go on the run.

Henry must use all his connections including Baron (Wong) to stay ahead of Clay Verris (Owen) and his latest project, Junior (Smith) a younger, faster version of Henry, only one that finds himself in a pawn in the bigger scheme.

Characters – Henry Brogan is a government assassin, the best assassin, only now he wants to retire because he doesn’t want to make a mistake, which he saw nearly happen on his last mission, he finds himself targeted by his former bosses that want to eliminate any loose ends, he uses his skills to fight back and stay alive. Junior is the cloned version of Henry that is younger fast and trained to be just as good if not better than Henry, he never knew this about himself and now he is stuck in the middle of completing his mission or learning the truth. Danny is a young agent that started as surveillance of Henry, but ends up fighting next to him to remain alive. Clay Verris runs the Gemini Project, he has raised Junior to be his own son and will do anything to keep America safe from anybody he sees as a threat.

Performances – Will Smith in the leading role or roles, here is trying his best to recapture the magic that once made him the biggest star in the world, sadly he just doesn’t seem to be able to play the serious action roles the way he can handle the funny ones. Mary Elizabeth Winstead does well in her supporting role, handling the action well through the film, while Clive Owen just becomes the typical villain he can do in his sleep.

Story – The story here follows a former government assassin that gets burned when he tries to retire and now he must go on the run with the very man hunting him being his younger clone from a project he never knew was real. This does try to spin another way of doing the burnt assassin who wanted out only to see his employer coming after him. We have seen the double idea before too, so we lose the originality idea too. We do have a lot of go to one location before heading to the next after having an action sequence of some sort. By the end of the story we just do the basics to give us a chance at a new technology rather than a new story.

Action/Sci-Fi – The action scenes are interesting to see, we do get a great chase sequence through Columbia, while the rest are all designed to feel a lot more deadly than the last one, while the sci-fi side of the film seems to follow the idea that clones could be the future.

Settings – The film does use plenty of settings, with each being used to give us a new action scene and that is about it.

Special Effects – The effects are used to put the two Will Smith’s on screen together, which at times don’t look as good as they should be.

Scene of the Movie – Columbia chase.

That Moment That Annoyed Me – The story just seems too slow.

Final Thoughts – This is just another action film that is trying too hard to be different and only ends up failing to capture the magic of an action film.