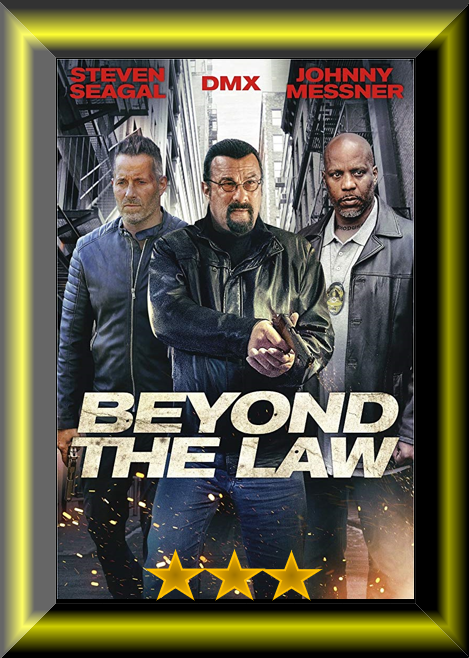 Plot: A former mobster turned businessman and a police detective must contend with a dirty ex-cop looking to bring the killer of his son to justice.

Story: Beyond the Law starts when Chance Wilson (Rushing) is murdered by mobster Desmond Packard (Ward), this grabs attention of businessman/mobster Augustino ‘Finn’ Adair (Seagal), Detective Ray Munce (DMX) and his disgraced father Frank Wilson (Messner) who returns to town to learn about the killer.

With Frank tracking leads, his reputation proceeds him, with Finn wanting to clean up the mess before it gets out of hand and Ray wanting to stop the bloodshed too, who will be the last man standing between the three.

Thoughts on Beyond the Law

Characters – Frank Wilson has a reputation for being the dirtiest cop on the force, that is why he is out of the game, he returns after his son is killed forcing him to reconnect with people both sides of the law to get revenge for his son’s death. Augustino ‘Finn’ Adair is a former mobster turned businessman, he has never bought caught which made his turn to the clean even more difficult to take, his son is the catalyst to the problems as he gets to learn who he can trust now. Detective Ray Munce is one of the few people that Frank trusts, even though he isn’t the man he once knew. Swilley does fill in the blanks in Frank’s time away, he wants to see Frank get his revenge along the way.

Performances – Johnny Messner, Steven Seagal and DMX in the lead roles are all strong enough, we see the older generation character showing the loss of control, while the young stars show the reckless nature they have turned too in their characters.

Story – The story here follows a father looking to get revenge after his son is killed by a local mobster and he returns to his old stomping grounds to get the person responsible. While this might seem like a by the book revenge film, this does have a difference, we are in a complete corruption filled world of characters, be it dirty cops, mobsters or reckless gangsters. This does change things because usually the revenge story is following somebody good who is pushed over the limit. Outside of this, we get everything unfolding just like you would imagine, waiting for a big blow off in the final acts of the film.

Action – The action isn’t as big as you would imagine with Steven Seagal involved, everything feels pretty routine, but didn’t need to get out of hand.

Settings – The locations used show Frank returning to an area he knows well, which sees him using his connections to get the answers he requires.

Scene of the Movie – Showdown.

That Moment That Annoyed Me – Not too much new to the genre.

Final Thoughts – This is a by the book revenge thriller, it does put us in a complete world of corruption, otherwise, we know how this will unfold.

Overall: By the book.