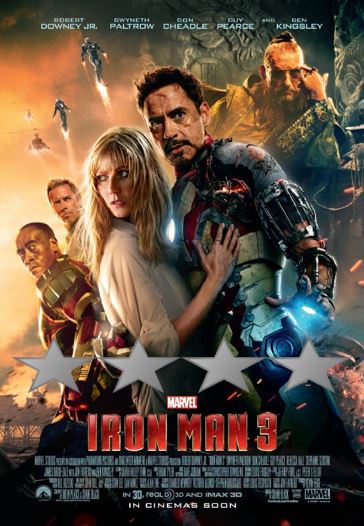 Plot: When Tony Stark’s world is torn apart by a formidable terrorist called the Mandarin, he starts an odyssey of rebuilding and retribution.

Tagline – Unleash the power behind the armor.

Story: Iron Man 3 starts in the aftermath of The Avengers, Tony Stark (Downey Jr) is still dealing with the side effects from going through the worm hole, to make matters worse Pepper (Paltrow) is getting tired of his action, a new terrorist known as the Mandarin (Kingsley) is bombing the world.

After Tony challenges him to fight him, Tony finds his mansion destroyed, with Tony getting stuck in a small town, when the true identity of the Mandarin is revealed and the man who is controlling him Aldrich Killian (Pearce) a man that Tony once rejected working with.

Characters – Tony Stark is back, this time he can’t sleep because of what happened in New York in the Avengers. He can’t cope with knowing he could know lose somebody he loves in Pepper, he keeps busy by improving his suits and challenge the new terrorist. He must go on a journey of self-discovery before fighting the latest enemy. This is one of the best character arcs in the franchise. Pepper Potts is still running the company, but is getting more distant from Tony, she learns how Tony feels about her by his actions in this film. Rhodey has become the lead guardian turned to for his newly rebranded Iron Patriot. He lets Tony get the important information required to learn the truth. Aldrich Killian is the man that Tony once forget or rejected, he has gone on to master a way to fix limp loss, which has helped him grow a group of soldiers that can explode if not treated properly, he has put a mask on his attacks making it seem like he had nothing to do with it. Maya is another lady from Tony’s past, she has her own reasons for returning, where she plays partly as a love rival for Pepper and somebody who still wants her work to mean something. Trevor is the Mandarin, through to be the big threat in the film, while we get a twist in his purpose in the film which has divided fans ever since.

Performances – Robert Downey Jr gives one of the best performances in the Marvel Universe because he must deal emotions unlike any other hero in the franchise to date. Gwyneth Paltrow gets to bring her own stamp to this role, getting more involved in the action this time around. Don Cheadle continues to make his character more likeable than ever. Guy Pearce does make for a strong villain, he keeps up guessing to what he will do next hanging on his words. Rebecca Hall struggles, but this is mostly because the character is written poorly. Ben Kingsley gives us one of the funniest performances in the franchise to date. 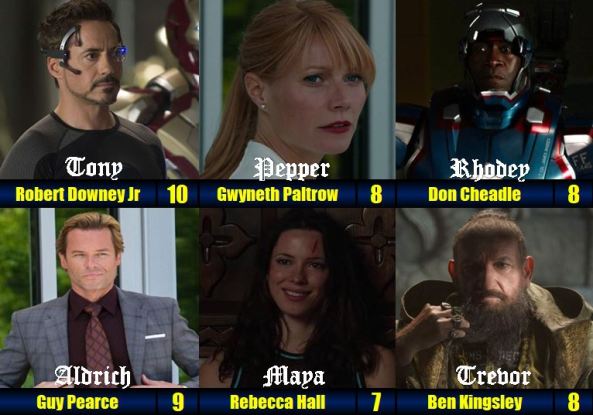 Story – The story involves Tony Stark facing consequences of The Avengers, while dealing with a new threat terrorising the world. This way of looking at the story is impressive because we have seen many superhero films that have never looked at dealing with side effects of the previous films, this brings Tony on a character arc which is easily one of the best in the franchise. The idea a villain has created a way for people to recover from limp loss that could end up becoming deadly weapons is strong because it continues to show rival inventors in Tony’s world. This is one of the stories which does get questions over a certain serve in the story, but it only adds to the way we are getting too.

Action/Sci-Fi – The action involved in the film is a terrorist that uses explosive to destroy or fight Tony Stark. Which does show us how the sci-fi world of technology is making a new threat to the world.

Settings – The film uses the settings to show Tony stuck in a town where he wouldn’t ever visit, the action scenes do take us to new settings though which does help.

Special Effects – The effects in the film show how flawlessly Tony can get in and out of his suits, the way the characters look when they could look to explode or regenerate, which fits the style of the film.

Scene of the Movie – The plane save.

That Moment That Annoyed Me – Failure to use Maya well enough.

Final Thoughts – This is one of the best character arcs in the franchise to date, we see how he must learn from his mistakes and fight a new threat.

The Conjuring 3, The Nun 2 and The Crooked Man

Synopsis – The Conjuring Universe continues to grow and with three more additions lets see how they all work out.