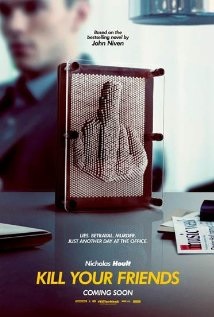 Plot: An A&R man working at the height of the Britpop music craze goes to extremes in order to find his next hit.

Verdict: Not For Me

Story: Kill Your Friends starts in 1997 the heights of the Britpop movement, where we follow and A&R man Steven Stelfox (Hoult) who knows how to play the system to stay in power with the cocaine binges. He looks to stay on step ahead of his co-workers by pushing limits to what risks can be taken and even killing one that gets in his way.

When Steven hears the potential next hottest band, he goes to extreme lengths to make the deal happen racing against the fellow producers looking to get the next biggest catch in the industry.

Thoughts on Kill your Friends

Characters – Steven Stelfox is the music producer that tells us the story of how he was riding high in the industry during the Britpop era of music, how they spent more time on drugs than making music happen and how they will do anything to push another member of office under the bus to stay in their high life. The rest of the characters we meet are fellow producers, the bands and a cop trying to get to them bottom of a murder.

Performances – Nicholas Hoult takes the leading role in the film and is easily the most interesting part of this film, his breaking the fourth wall gets the laughs needed and by the end he is the only part of the film I enjoyed.

Story – The story takes us into the world of the Britpop where we follow one man who is clearly out of his comfort zone with his job, where he has been blagging to job over knowing the role he should be performing. It isn’t the most interesting because you do feel like it is mostly fictional instead of trying to be a fact-based look at the world.

Comedy/Crime – The comedy used in the film shows us just how far Steven will go to make things happen, while the crime side also show sus where he will go to keep his job.

Settings – The films settings show us the party life the characters will be entering while trying to find the next hit band, it also shows how the characters are self-centred.

Scene of the Movie – Steven goes too far.

That Moment That Annoyed Me – it paints how bad the industry is.

Final Thoughts – This isn’t the most interesting of films, it is a subject matter I personally don’t care for and it doesn’t paint anybody in the industry to be remotely nice.

Overall: Just one that doesn’t work for me.

Plot: In Jumanji: The Next Level, the gang is back but the game has changed. As they return to rescue one of their own, the players will have to brave parts unknown from arid deserts to snowy mountains, to escape the world’s most dangerous game.

Story: Jumanji: The Next Level starts a couple of years after the first adventure, Martha, Bethany, Fridge and Spencer have moved onto the next stage of their lives, heading home for the Christmas holiday, Spencer however has started to become distant from the rest, he finds his room being shared with Grampa Ed (DeVito) and decides to try and fix Jumanji.

After Spencer doesn’t arrive for the meet up with the old gang, the friends find themselves sucked into the game, along with Grampa Ed and his old business partner Mile (Glover) as they must complete a new challenge in the world of Jumanji.

Thoughts on Jumanji: The Next Level

Characters – Outside the game Spencer has found himself alone in New York for university, he has a job in a shop which has seen him starting to wonder what is life is actually going to be about, broken up with Martha, he doesn’t know where what to do next, ignore his friends and home just to see his family. He decides to try and rebuild the game, so he could return to being Dr Smolder Bravestone to regain his confidence. Bethany has continued to travel the world, Martha has found popularity in college, despite still being incredibly insecure and Fridge has continued to build his sports career. These three are still close and want to keep Spencer in their circle, only they have continued to be positive in life. Grampa Ed is now living in with Spencer’s mum, in his room after a hip operation, he has fallen out with his old business partner Milo, Milo has come to try and make up with Ed after their lifelong friendship ended suddenly. Inside the game we get the same characters Smolder Bravestone, Franklin Finbar, Dr Shelly Oberon and Ruby Roundhouse, they are the same basic character with a few new additions, much like any video game sequel, with that we get new additions in Ming who has a whole new set of skills and a horse. There are some mix ups to who are each of the characters in the game.

Performances – Dwayne Johnson and Kevin Hart are strangely two of the weaker points in the movie, this is because this time around they have to almost be parodies of well-known actors instead of reacting to traits characters are meant to have, while Hart is more restrained, Johnson does crack his role on this side of the film enough. Jack Black and Karen Gillan have excellent comic chemistry which shines through in the film, while the addition of Awkwafina is great for laughs, coming off stronger in the second half do the film than the first.

Story – The story here follows the friends return into the game of Jumanji joined with a couple of new characters, where they need to travel their way through the game one more time to save Jumanji from a new enemy. While the adventure inside the game side of the story is bigger and the entertaining part of the story, where we try to put a big emphasis on the story is on friendship, we see how people can become more distant, how you should always try to make time, no matter where you are in life and even see the consequences of not always being there for somebody. The story really doesn’t do anything groundbreaking, nor did it need to.

Adventure/Comedy – The adventure side of the film does give us a brand-new adventure within the game, new dangers, new locations, it feels like we are getting a brand-new video game with the same loved characters. The comedy here is a mix, because a lot of the old people jokes get tiresome quickly, but once the statue quo is returned to normal the comedy is back to its best, just takes too long getting there.

Settings – The film uses the new locations within the game, including the desert, mountain range and amazing bridge crossing location.

Special Effects – The effects in the film can be mixed too, it doesn’t help with the pure ambition behind the set pieces which are needed for the CGI moments.

Scene of the Movie – The bridge crossing, such a unique creation.

That Moment That Annoyed Me – Certain body swaps.

Final Thoughts – This is a fun sequel that once again gets stolen by the supporting cast of Karen Gillan, Jack Black and newcomer Awkwafina that get most of the laughs. 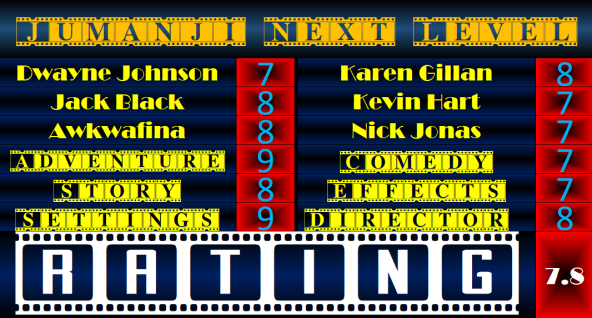 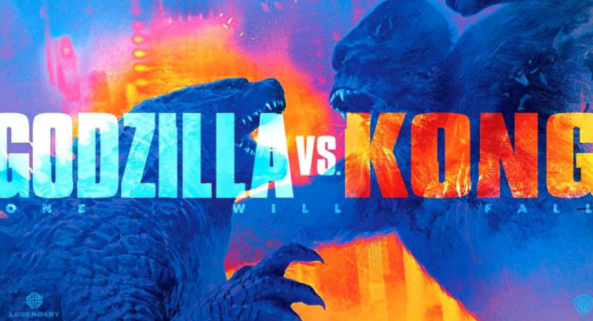 Synopsis – As the gigantic Kong meets the unstoppable Godzilla, the world watches to see which one of them will become King of the Monsters.