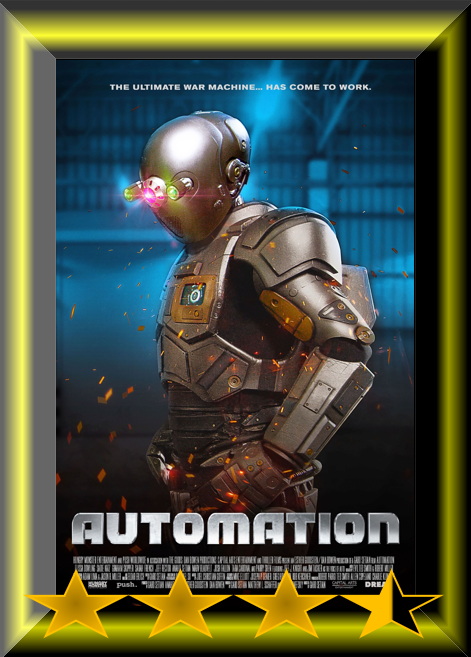 Plot: A workplace robot, AUTO, transforms into a killing machine when he discovers he will be replaced by a more efficient model. AUTO fears being terminated and will stop at nothing to prevent his own destruction. The human employees must band together to stop him before it’s too late.

Story: Automation starts with a business using the AUTO robot, which has decreased the costs of staff, while including upping efficiency and now Susan (Katz) is arranging with Bill (Rector) into replacing all of the staff with the new line of models improved from the AUTO one they already have.

While AUTO has made friends around the warehouse with Jenny (Dowling) an aspiring singer seeing the good in him, even if AUTO is suffering from nightmares of murdering the employees. Alan (Shen) is recruited to bring in the new robots in and like the human employees, AUTO gets reacts badly to being replaced, causing AUTO to get dangerously destructive. 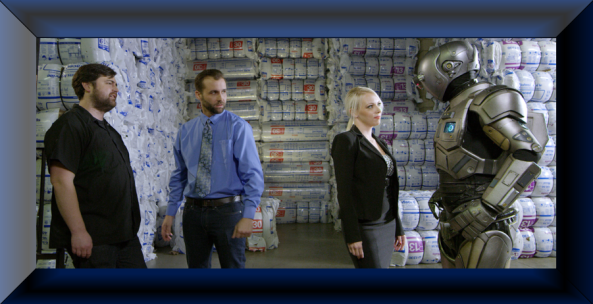 Characters – AUTO is the robot that has help improve the company, he has befriended Jenny and gets on with most of the employees around him, even if he has caused the people to lose their jobs. He learns he is getting replaced and deactivated wanting to stop this, his previous mindset has come out, showing a deadlier side. Jenny is a freelancer that has been working for the company for years, she is a singer on the side dreaming of making it big and has created a friendship with AUTO unlike anybody else in the office, she becomes the person he most wants to protect. Susan is one of the managers that wants to bring in the robot employees, she will do what will make the most money for her and is happy to turn on the loyal employees.

Performances – Elissa Dowling in the leading role brings us an ambitious likeable character that could be any of the dreamers out there. Sadie Katz brings the cutthroat boss to life, showing she doesn’t feel for anybody through the film. Parry Shen has been in sci-fi horror for a while now, if you have seen him before you know you will get a fun character from his performance.

Story – The story follows a greedy business that is looking to replace its employees with robots after a successful trial with an early model, but when the model learns it is getting replaced, it is resorts back to its original programming looking to try and save its job, by any means necessary. The story is putting a firm focus on the idea of workers getting replaced by technology and how they are getting upset, but the spin comes from how the technology might react to finding themselves getting replaced. It poses plenty of questions about whether technology is needed, despite turning into a bit a slasher styled sci-fi where the human employees need to avoid the destructive nature of the robot.

Sci-Fi – The sci-fi side of the film does take us into the near future where we get to see how technology is being used in everyday life, and how they AUTO robot might not be functioning correctly.

Settings – The film is set in a city that has continued to grow with technology with most of the action within the warehouse location that contains the action unfolding.

Scene of the Movie – Present.

That Moment That Annoyed Me – The pursuit does seem to go on longer than it needs to.

Final Thoughts – This is a sci-fi movie that does ask a big question about employment in the future and shows that not only the humans getting upset, but the robots that could get upgraded and replaced too, it does turn into a fun slasher chase film, which does work well, even if it is slightly repetitive.