Plot: Fifteen years ago, two teenage girls were murdered at Merrymaker Campgrounds. The case was filed an animal attack, the camp was condemned and the killer never found – but something horrific still waits in those woods.

Tagline – This is a story about a monster.

Verdict: You Will Never See This Coming

Story: Animal Among Us starts as two sisters Anita (Oleynik) and Poppy (Donlon) are preparing to reopen the Merrymaker Campground, one that had an incident before with an unsolved murder, one that author Roland Baumgarner (Oliver) made famous in his book. When a stranger turns up the girls must investigate her video which could explain her mindset.

The girls start to notice strange footsteps getting closer to the camp and with the opening coming closer, they start to wonder if they are alone or not.

Thoughts on Animal Among Us

Characters – Anita is the older of the two sisters, she has dedicated her life to preparing the camp that has been in her family for generations. She does know who she can trust to help make this happen and isn’t going to let any story of monsters stop this happening. Poppy is the younger sister, she wants to help Anita, even if she does have more belief in the stories than her sister, she is flirty and more open than her sister too. Roland Baumgarner wrote a book which was based on the same camp ground, he is invited to be there for the grand opening, which sees him needing to leave his wife and baby behind, he does have a reputation back home for not being faithful and easily seduced, he is also out of his depth when it comes to anything outdoorsy. Christine is the wife of Roland, who has suspected his unfaithful ways, but doesn’t have any proof, until he goes away.

Performances – Larisa Oleynik in the leading role is great to watch, you can never put your finger on what her character is thinking through the film, while Christine Donlon does make her character seem more naïve without being as naïve in the film. Christian Oliver does well through the film however hard ti is to support his character.

Story – The story here follows the reopening of a camp that has a history of a mysterious attack years before, an author who made his career’s only big hit is visiting for the opening, where the real monster is revealed to the world once more. This is a story which is filled with plenty of miss-direction which is a delight, what starts off looking like your typical bigfoot movie, plays along those lines well, until we take a different direction that spins everything on its head and turns into on of the most interesting stories of the year. We can’t get into everything that happens because it would spoil too much, though we can talk about certain pacing, which does leave you wondering more about most of the first half of the film, which ends up not being as big as it could be.

Horror – The horror side of this film comes with just how the world sees this location which is filled with an event that doesn’t have everyone convinced. Which does show us that in America there are going to be locations which are covered in mystery.

Special Effects – The effects are used when needed without being anything overly special because the film doesn’t turn to them.

That Moment That Annoyed Me – Couple of random feeling characters.

Final Thoughts – This is a movie that will keep you wondering what will be happening instead of just becoming a generic horror film and it will even play that out to the audience.

You can read more of Movie Rob’s review here 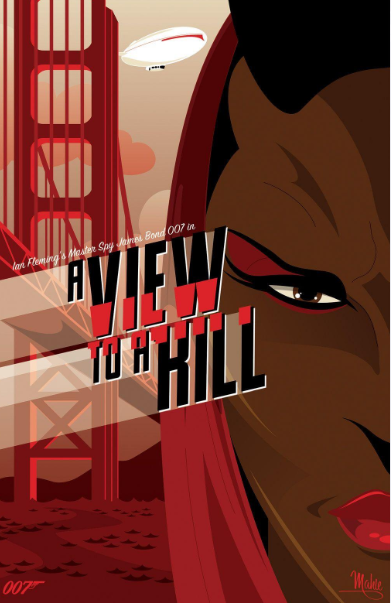 Brief Synopsis – Bond is sent on a mission to try and discover why a computer tycoon is trying to fix a horse race by drugging the animals.

My Take on it –  This is probably my very favorite James Bond movie and that probably has much to do with the fact that I saw it in the theater when I was 11 and then subsequently numerous times on cable in the years afterwards.

Roger Moore was definitely beyond his prime when he made this film, but he despite his advanced age, he does a wonderful job with this character for the final time.

He is able to deliver his lines with his iconic Bond tone and does some great stunts along the way that help endear the character by all that he does.

Love the way that this film’s story brings the franchise closer to the 21st Century by relating with technology and computers as the resource sought after by the villains.

Christopher Walken is superb as Zorin and gets the character’s borderline craziness down pat so well.

The film’s title song by Duran Duran is my favorite of all of the Bond theme songs and is a song that I can listen to over and over.

Its musical theme is used throughout the film and adds much to the tone and suspense of the story.

Check out the video here:

Yes, this film has many aspects that come across as being campy, bit that actually helps make it so much fun to watch and is perfectly set up for the kind of things that Moore did during his tenure in the role and is a fitting finale for him as 007.

His quips are so iconic and enjoyable to listen to.

The gadgets that Bond gets from Q are once again spectacular and enhance the story so much especially when we get to watch Moore utilize them in the most unusual situations.

Grace Jones and Tanya Roberts are the most prominent Bond girls in this film.

Jones is superb in her role, but Roberts and her screechy voice get a bit too annoying.

Bottom Line – Really fun Bond film that still remains my favorite among the entire franchise. Moore is a bit too old for the role, yet still is able to deliver some iconic lines and do some nice death defying stunts. The story helps bring the Bond franchise into the 21st century by dealing with computers and technology as the main resource sought by the villains. Walken is superb as the villain and is able to play the borderline craziness of the character really well.  The theme song by Duran Duran is among my favorite songs and helps give the story a boost by helping set the tone and pacing of things.  There is some campiness in the film but that has much to do with the kind of tone that Moore set for his films especially when it comes to his quips. The gadgets are once again lots of fun to watch being used and they enhance the story immensely.  Highly Recommended!

MovieRob’s Favorite Trivia – Duran Duran was chosen to do the song after bassist John Taylor (a lifelong Bond fan) approached Producer Albert R. Broccoli at a party, and somewhat drunkenly asked “When are you going to get someone decent to do one of your theme songs?” (From IMDB) 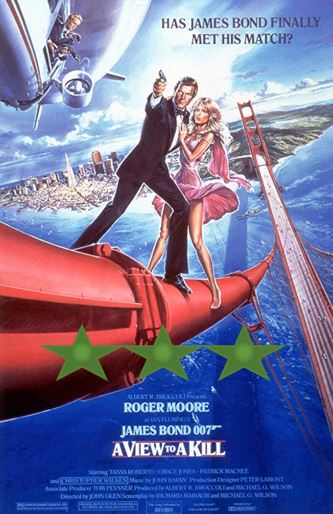 Plot: An investigation of a horse-racing scam leads 007 to a mad industrialist who plans to create a worldwide microchip monopoly by destroying California’s Silicon Valley.

Story: A View to a Kill starts when James Bond (Moore) is assigned his latest mission, one in California looking into Max Zorin (Walken) whose horses never seem to lose, this has attracted known criminals who want to invest in his horses.

James gets an invite to the mansion of Max as he investigates his other business, microchips and ones that can withstand nuclear explosion, he is taking a monopoly on the market which will leave him to demand any price and deal with the highest bidder.

Thoughts on A View to a Kill

Characters – James Bond remains the man we know, he still uses his charm to get closer to the enemy and always finds a way to get out of the trouble, he isn’t afraid to get his hands dirty when it comes to getting to the bottom of the mission. Max Zorin is the man behind the microchip monopoly, he wants to eliminate the threat of Silicon Valley before it becomes competition, but hi past time in horses paints a target on his chest. Stacey is the Bond girl for the film, she has worked with Zorin which has seen her taking a payoff to become quiet. May Day is the henchwoman this time, strong as anybody else and standing by Zorin’s side, simply to stop him ever needing to get his hands dirty.

Performances – Roger Moore does seem to struggle more in this more serious role, he is strongest on the campy side which this film doesn’t have much off. Tanya Roberts could be the weakest Bond girl to date, mostly because she doesn’t get much to do in the film. Christopher Walken as the villain is great fun and just as menacing as you would imagine. Grace Jones makes for one of the better henchwomen, what she does is up there with the Jaws character.

Story – The story here follows James Bond on his latest mission where he must take on a technological genius that is planning to take control of the Silicon Valley technology boom. This story does feel tonal strange because it does feel like a strong action film, only it has James Bond thrown in here, this doesn’t ever feel like a Bond story which confuses as it is an entertaining story. The stakes are high in this film and bringing that extra fear factor to everything what is unfolding here. The fact this isn’t connected to previous films helps too because it doesn’t rely on you needing to have seen them either.

Action/Adventure – The action in the film does have a few chases one with a fire truck being the most notable and the final sequence which has bodies flying everywhere.

Settings – The film takes place in America which does work and in the San Francisco location would be right where the technology boom would be taking place.

That Moment That Annoyed Me – It never feels like a Bond movie.

Final Thoughts – This is a great action movie which does show us just how original stories can be made, the problem is, that it struggles to feel like a Bond movie.