Plot: Agent 007 is assigned to hunt for a lost British encryption device and prevent it from falling into enemy hands.

Tagline – Bond for the ladies in For Your Eyes Only

Verdict: The Weakest Bond So Far?

Story: For Your Eyes Only starts when a British submarine is sunk with the equipment lost putting Britain in danger, with a salvage crew hired they a killed leaving only the daughter Melina (Bouquet) alive. James Bond (Moore) is put on the case to retrieve the equipment before it falls into the wrong hands.

James must work with Melina to figure out just who is behind the attack and working for the Russians, with Milos Columbo (Topol) and Kristatos (Glover) being the prime suspects.

Thoughts on For Your Eyes Only

Characters – James Bond has returned to his roots after disposing of an old enemy, he must work with other intelligence agencies to figure out who is behind the a British submarine sinking, he still picks up the women, only here he rejects one for once, he will go out of his way to not trust both sides just to be sure who he can trust. Melina is the daughter of the explorer that is killed, she wants revenge and will help James out through the adventure. Milos is one of the potential suspects to whom could be after the equipment. The film does struggle to establish a true villain, we have the hitmen, but when it comes to the lead villain we don’t learn the identity until late into the film.

Performances – Roger Moore is good as always in his role in the movie, he does bring a more serious approach this time around. Carole Bouquet has the look of a Bond girl no question, but the fact that they have to dub her doesn’t help her performance. When we look at the rest of the cast we don’t get too many standouts because we don’t know who the villain is until too late.

Story – The story follows Bond on his latest adventure where he must track down a missing component from a British submarine, he must play both sides to whom could be the person behind it all. This time we get a much more serious focus on the story cutting out the cheesy material we have been seeing in the previous films. This is a good thing only the fact the film struggles to establish a villain until later into the film, we never feel like there is a big enough threat in the film. in the end this does feel like one of the weakest stories in the franchise to date.

Action/Adventure – The action brings back the wildly over the top races with the ski versus motorbikes being the highlight of the ones we see here. The adventure does take Bond around the globe again, this is what we come to know from him.

Settings – The settings add moments of tension in the film with the action sequence feeling fresh, the climbing scene being nail biting and the underwater moments being shark infested. 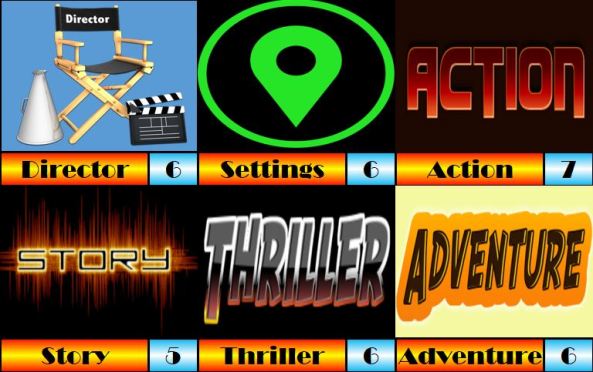 Scene of the Movie – Skiing versus motorbike scene.

That Moment That Annoyed Me – The bad dubbing job on Melina.

Final Thoughts – This feels like one of the weakest storylines to date, the tense moments are great though, the film lacks the iconic villain which most of this franchise has become so famous for.

Overall: Not on the best level.