Plot: The young magician Marek dreams of exciting adventures. When she meets the help-seeking priestess Teela she offers her assistance and provides a motley troupe. Together they go in search of Teela’s sister, who was kidnapped by a wild ogre.

Tagline – Heroes will rise. Legends will come to life.

Verdict: Fun Made for TV Adventure

Story: Mythica: A Quest for Heroes when Teela (Posener) is set away with a hidden item from a wild ogre, meanwhile in a small village, disabled young woman Marek (Stone) has been learning about spells and is forced into using one after her owner gets abusive, forcing her on the run.

With Teela desperately in need to people to help fight back to save her sister, the only person that offers to help is Marek, seeing it as a chance to go on her first quest, Teela uses her own ability to see just how much potential Marek has, accepting her help, building her own team including Thane (Johnson) and Dagen (Stormoen), all to save Teela’s sister.

Thoughts on Mythica: A Quest for Heroes

Characters – Marek is a young slave woman, left to struggle through life because of her limp too. She dreams of going on her own adventures, which has seen her learning about magic, only a beginner, she has learnt about spells, she jumps at a chance every other bounty hunter refuses, which sees her build her own team, which will give her a chance to go on her first adventure. Thane is a warrior that isn’t afraid to get involved in a big fight against the odds, Dagen is a thief that gets forced into helping on the quest, his skills will be used to sneak with him being an archer when forced into combat. Teela is the sister of a priestess, she is sent for help to rescue her sister, which sees her using her powers to help her team.

Performances – Melanie Stone is the leading lady that shows us how much she wants to go on the adventures, she doesn’t do anything wrong and makes us care about her characters adventures. Adam Johnson brings the brute performance needed, while Jake Stormeon shows us a cocky figure. Nicola Posener does well in her role too.

Story – The story here follows a new group of fantasy based characters, a witch, brute, thief and a healer that go on a rescue mission to try and save a priestess from an evil ogre. This story does feel like one of the opening levels of an RPG video game, we get to meet the different characters, all drawn together for different motivations that will work together to save the day. It is strange because if this was a cinema movie, you would feel disappointed with the story, but for television, this is everything you need to introduce our characters and show what they are capable off, with a villain that can be defeated easily in a world which will offer bigger threats.

Action/Fantasy – The action in this film is basic television style fight sequences, they are easy to watch, but you always know the heroes will win them. The fantasy world we get to enter shows us just how many different people with different skills are in this world.

Settings – The settings fill us with small farming villages, mixed with woodland walking which shows us that we are meant to be in an ancient times.

Special Effects – The effects are not the greatest, but they do work for the film, they bring us a disturbing looking creature as well as the use of magic in its own unique way. 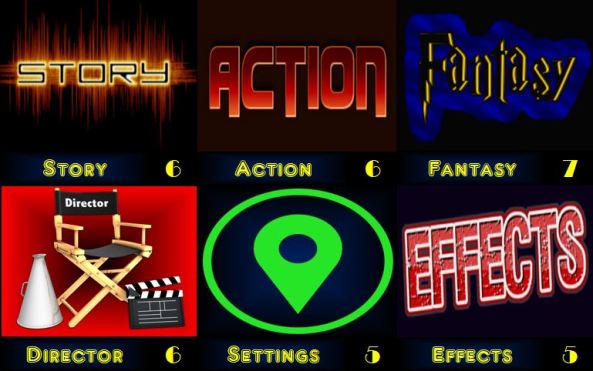 Scene of the Movie – The creature in the woods.

That Moment That Annoyed Me – The clearing monster, it is the weakest of the CGI moments.

Final Thoughts – This is an entertain opening to a franchise, we get to meet the characters, learn their abilities and see them face their first enemy.

One comment on “Franchise Weekend – Mythica: A Quest for Heroes (2014)”