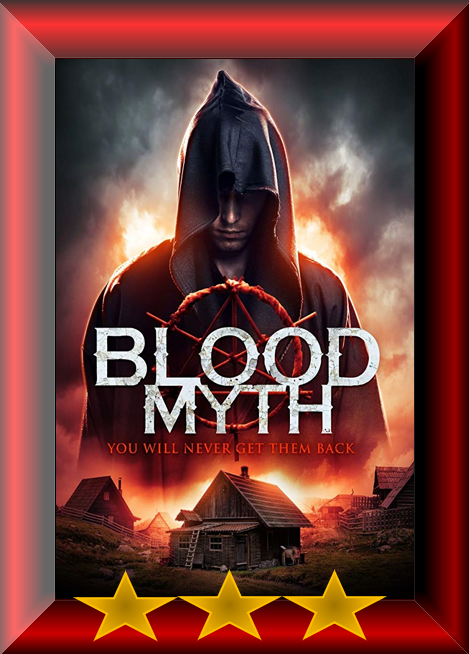 Plot: A journalist desperately tries to find his missing fiancée and finally uncover the truth behind a sinister folklore, leading him down a dangerous road of discovery.

Tagline – Death has many faces.

Story: Blood Myth starts as journalist James Lincoln (McClean) has been getting tired of exposing stories of the paranormal for his latest article, he does uncover a folklore about people disappearing every 30-years, which sees him taking his heavily pregnant fiancée Harriet (Dawson) on this investigation.

After Harriet disappears, James spends the day searching for her, getting no support from Sergeant Benedict Jarrett (Brown) or the rest of the town, with paranormal blogger Alexandra Priest (Chalmers) offering up some secrets to the mystery.

Characters – James Lincoln is a journalist, his latest case involves in trying to debunk folklore which he is finding all too easy, until he learns about this newest one, which he decides to use as his final part of the article, he takes his fiancée who is pregnant and he has cheated on before to investigate. He spends time trying to find his missing fiancée learning that not everything is a myth. Harriet is the pregnant wife that joins James on his journey, she does disappear, being the mystery about what is going on. Alexandra is the local woman that has been studying the myth for years, being the only person that helps James out. We do meet plenty of locals, with most just dismissing James cries for help.

Performances – Jonathan McClean is the star of the show, he is involved in nearly every scene, it is his work dealing with being tired of the investigations, which is clear how he is dealing with this story. The rest of the cast don’t get much time to do anything more than the basics required, not given enough time to do much more.

Story – The story follows a journalist that is investigating myths and folklores with the latest one being one that might have more truths behind it. The story is interesting because it does show how frustrated the journalist is doing this story, which is against the normal as we usually see overly enthusiastic ghost hunters trying to debunk them. The story flows as James learns more about everything, but just like him, we don’t learn much about what is happening until he does. We do get plenty of mystery, but like most films like this the story ends up going in the same direction.

Horror – The horror in this film comes from the unknown, this does leave us wondering just what is going on, with the darkness and noise being used to the strongest effects.

Settings – The film is set in a small British village, which does help play into the folklore because the small villages are always going to have them.

Special Effects – The effects are saved for big moments in the film, they are kept hidden more than thrown onto the audience.

Scene of the Movie – The day after the first night.

That Moment That Annoyed Me – Too much searching though.

Final Thoughts – This is a horror that does ask plenty of questions, with what is going on, only to follow a simple instruction on how everything ends up unfolding.