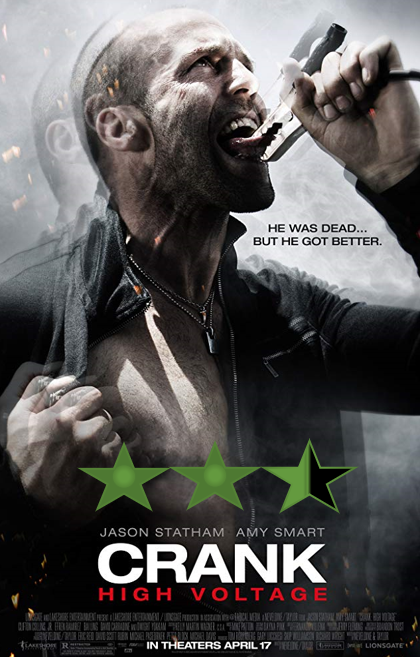 Plot: Chelios faces a Chinese mobster who has stolen his nearly indestructible heart and replaced it with a battery-powered ticker that requires regular jolts of electricity to keep working.

Tagline – He was dead… but he got better.

Story: Crank 2: High Voltage starts right where the last film finished and Chev Chelios (Statham) somehow has survived his fall and is rescued and given a new heart, an electric one, Chev goes in search for his own heart, but needs to keep his current one full charged or face the same fate as the first film.

Chev must track down the man who stole his heart, which will see him returning a few familiar faces including his girlfriend Eve (Smart) and brother to his old friend Venus (Ramirez).

Characters – Chev Chelios somehow survives his mile high fall from the first film, he is given a new artificial heart which he must keep charged or he will die, he goes in search of his own heart which will see him go against another gang in LA, Eve now knows about Chev’s career, she has become a stripper and will supporting him trying to get his heart back. Doc Miles will do everything he can to help Chev giving him advice on how to keep his heart going. Venus is the brother of Kaylo who goes on to help Chev to get revenge for his own brother’s death. We have more gangs that are working against Chev this time, some return others are new.

Performances – Jason Statham does what he can with the leading role, he handles the action with ease, only he just doesn’t reach the same levels as before, this does affect the rest of the cast who do struggle to make an impact in this film.

Story – The story does follow the next chapter of Chev’s life, the one after he should have died, only for him to get a new chance which sees him needing to race against time to get his own heart back. This side is simple enough at does work for what the film is doing, Chev take on endless amounts of enemies, the problem here with the story is that we dive too much into the side characters of what is going on and end up getting too many completely random scenes which just seem offensive on too many levels. This story does end up becoming messy and just has one of the worst scripts out there.

Action/Crime – The action does try to become bigger, only for it to be shot in a style which doesn’t make it easy to connect. The criminal world does feel bigger, but now everything does seem more personal rather gang controlled.

Settings – The film remains set in LA which does continue to show the crazy gangs that are meant to operate in this city.

Special Effects – The effects do feel like they are being more ambitious, only for some to be so farfetched they only seem to make things look confusing, including an insulting looking Godzilla like fight.

Scene of the Movie – Final showdown.

Final Thoughts – This is a wildly over the top sequel which only ends up becoming too much to handle for the crazy nature of everything going on.

Plot: Flight 7500 departs Los Angeles International Airport bound for Tokyo. As the overnight flight makes its way over the Pacific Ocean during its ten-hour course, the passengers encounter what appears to be a supernatural force in the cabin.

Story: Flight 7500 starts by letting us meet the crew Laura (Bibb), Suzy (Chung) and Captain Pete (Schaech), along with the passengers including couples Brad (Kwanten), Pia (Smart), Liz (Whelan) and Rick (Ferrara) along with a host of singletons Jacinta (Taylor-Compton), Raquel (Serratos) and Jake (Frost) who are traveling from LA to Tokyo on an overnight flight.

When a passenger suddenly dies on the flight, it is only the beginning of a nightmare journey, which brings a supernatural force to the plane, one that nobody is prepared to fight against.

Characters – Brad and Pia are a married couple looking to take a vacation away from their normal lives, there is some tension between them because of the decision, Brad will help out more during the supernatural phases of the flight as he is prepared for an emergency situation. Laura and Suzy are the two flight attendants, one is having an affair with the pilot, the other is waiting for her wedding day, they are quick to judge the passengers on the flight. We do meet slightly too many characters in this film because we have newlyweds on their honeymoon, a rebellious looking woman, a prankster and a woman worried about her past. By giving us this many characters it makes it hard to learn everything about them.

Performances – We have a cast that are all known actors here, most you might not remember their names, but you will have seen them before, first we have Ryan Kwanten, who like most of this cast is going to get the same problem with their performance, they don’t get time to make an impact, we seem to waste Amy Smart getting not enough time to make any impact for her talent. Leslie Bibb is stronger, but only because her character is in the position to be allowed to make a different.

Story – The story follows the passengers and crew of a 10 hour flight that start getting haunted by a supernatural presence mid-flight causing them to need to figure out what is going on before it is too late, with nowhere to run. This story does end up throwing us into a mystery about what is happening, which doesn’t really get solved by the characters on the plane, only to end up trying to turn to a big reveal on the truth, which feels more like a cop out leaving too many unanswered questioned in the story.

Horror/Mystery/Sci-Fi – The horror elements are interesting because we do get to focus on the idea of something supernatural going on, this does dive into the mystery, sci-fi elements of the film because once we learn what the answers are.

Settings – The film is set on a plane which is important because once in flight, there is nowhere our passengers can go and when things start going through the supernatural events.

Scene of the Movie – Adding the pieces together.

That Moment That Annoyed Me – It just seems to end.

Final Thoughts – This is a horror mystery which starts off keeping us interested, only for it to run out of ideas and just end suddenly.

Overall: A horror without a true ending.