Plot: Jennifer Hills is still tormented by the brutal sexual assault she endured years ago. She’s changed identities and cities, reluctantly joining a support group where she begins to piece together a new life. But when her new friend’s murderer goes free and the tales of serial rapists haunt her, Jennifer will hunt down the men responsible and do what the system won’t – make them pay for their crimes in the most horrific ways imaginable. Only this time, no jury may be able to save her.

Tagline – Vengeance is a bitch.

Story: I Spit on Your Grave: Vengeance is Mine starts as we follow Jennifer, now going by Angela (Butler) trying to get on with her life after the events in the first film, she is haunted by the sexual assault she suffered and has living fantasies about killing any man that comes offensive towards her.

Joining a support group for rape victims, Angela meets Marla (Landon) who wants to make guys pay for their behaviour, while it starts with pranks and minor assault because Angela knows the consequences of full vengeance, though this change when Marla is murdered by her ex-boyfriend that walks for the crime. Angela turns to her vigilante way to get her own revenge for her friend’s death.

Thoughts on I Spit on Your Grave: Vengeance is Mine

Characters – Jennifer/Angela, is the victim from the first movie that got her revenge on her rapist, now back in the real world, she is still experiencing nightmares from sexual assault and fantasies of killing anyone that shows any sexual interest, be it a look or inappropriate touching. This becomes a reality once her new friend is killed and now she sets out to kill anyone that has victimised members of the rape support group. Marla is the new friend Angela makes, she has been a victim of an abusive ex-boyfriend and gets to show a looser side when working with Angela to get their message across to the guys in their lives. Oscar is a member of the support group that has seen his daughter raped before she killed herself and the rapist walked free, he talks the revenge game, never sure whether to take the step. Detective McDylan is investigating the murder of Marla and tries to help Angela when the suspect gets murdered, this is a generic cop figure.

Performances – Sarah Butler returns to the franchise (that what it is now?) she is clearly the star of the show here and continues to bring us a strong character in every scene. Jennifer Landon is good in her supporting role getting to be wild at times. Sadly, the rest of the cast are just fine, while the characters they are playing are interesting, we don’t get to see much from them as the film is centred around Sarah’s character and interactions with these characters.

Story – The story here picks up with the life of Jennifer as she has tried to start a new life after the events in the previous film, yes, we skip the second films events all together. This brings us back to the real world where the hate she feels is still strong, though the motive to act on it is being held back, until her friend is murdered and now she needs to get back to her blood vengeance she is going through to help clean up the streets.

Horror – The horror from this film comes from the horrors that the victims have been through and how Angela goes out to get her own justice.

Settings – The film being set in the big city, is a big change, it shows us how the city can be filled with people you would never know their darker secrets and how cleaning them up can be difficult.

Special Effects – The effects in this movie are used lightly, but when they are used they are brutal and effective to show the horror being put on the victim.

Scene of the Movie – The first real murder, it is graphic as they come.

That Moment That Annoyed Me – Too many dream sequences.

Final Thoughts – This is a good sequel to a film that didn’t feel like it needed one, showing the lasting effects of what happened to Jennifer is the highlight of the film and something you do want to continue watching.

Overall: Nice sequel that works in the right ways. 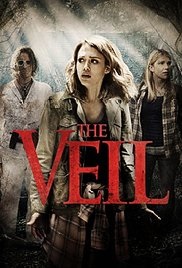 Plot: Twenty-five years after members of a religious cult committed mass suicide, the lone survivor returns to the scene of the tragedy with a documentary crew in tow.

Story: The Veil starts as we learn about Jim Jacobs (Jane) and his religious cult that committed mass suicide at a place known as ‘The Veil’ only one person survived, a young girl. 25-years-later a documentary film maker Maggie Price (Alba) leads a team with the grown-up survivor Sarah (Rabe) back to ‘The Veil’ to learn what happened and why Sarah was spared.

Being back gives Sarah a few answers as she leads the team around the camp discovering a secret stash of videos which show what Jim Jacobs was up to in cult and not everything is what they were expecting as they start to find themselves haunted by the spirits of the cult.

Thoughts on The Veil

Characters – Jim Jacobs is the leader of the cult, he wants to prove the spirit can be separated from the body, did he die in the mass suicide or did he achieve his goal with the other members of the cult. Maggie the lead in the documentary team, she introduces the team and arranges for Sarah to return, she does also have a connection to what happened during the mass suicide. Sarah is the lone survivor from the suicide, she returns as a grown up even if she does seem to be happy to be back to learn the truth.

Performances – Thomas Jane is the highlight of this movie, his performance is filled with all the crazy needed for role. Jessica Alba on the other side of the coin is average to poor throughout, this role could have been played by anyone to a higher level. Lily Rabe does continue to make herself feel like she should be in horror films at all times.

Story – The story follows the documentary team looking at new evidence which could explain what was happening on the site of a mass suicide. The idea of learning what happened through a mix of tapes which sadly don’t feel like found footage which is the biggest problem. The continuing idea works but the forced horror is the stumbling block here. The story does also have flaws including why didn’t the police investigate the property to find the tapes, I mean come on there was a mass suicide surely raiding every possible location is important in an investigation.

Horror/Mystery – The horror does feel forced for the most part and once we see the final scene feels almost unnecessary, this could easily have just stuck to the mystery thriller side of things and kept us on edge wondering where things will go next.

Settings – The whole film is set on the Veil, it shows a place that has had mass suicides would be haunting to be around as well as have secrets people might have missed.

Special Effects – The effects for the ‘found footage’ are way too high of a quality, this is mostly down to one moment feeling like it has the grainy effect but the next we are thrown into that time. The ghost activity is fine but nothing overly impressive.

Scene of the Movie – The final moment.

That Moment That Annoyed Me – I want to put a couple here, first why did the police not investigate the surrounding area? Why is Jessica Alba a lead actress? The horror is mostly plain old jump scares.

Final Thoughts – This is a by the book horror mystery thriller which would have hit higher levels if it had remained just a mystery thriller without the pointless jump scares that miss most times. We also have a forgettable supporting crew in the documentary team.

Overall: Try but don’t buy in.