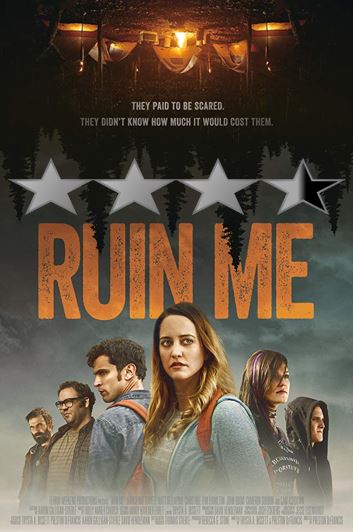 Plot: Alexandra reluctantly tags along for Slasher Sleepout, an extreme event that is part camping trip, part haunted house, and part escape room. But when the fun turns deadly, Alex has to play the game if she wants to make it out alive.

Story: Ruin Me starts as six people, couple Alex (Dwyer) & Nathan (Dellapina), horror expert couple Marina (Hamilton) & Pitch (Odom), Larry (Hill) and Tim (Gordon) take part in a Slasher Sleepout weekend, which is designed to scare the members like they are living in a horror film.

As the weekend continues it soon becomes a race to survive because the game doesn’t seem as friendly as they first thought, and they must figure out if they are in a real slasher event.

Thoughts on Ruin Me

Characters – Alex joins her boyfriend on this weekend, she isn’t the biggest horror fan, but a couples weekend, is a couple weekends, she has a past which has seen her struggle through events in her life, which will make her fit the typical final girl for a slasher experience. Nathan is the boyfriend that was going on this weekend with his best friend who paid for everything, only to drop out, he has always been loyal toward Alex, whatever her struggles. Larry is a lone man that has been on this style of weekend before and enjoys meeting the new people that take part in the games. Marina is one half of a horror fan couple, she does fill the slutty figure of the cast.

Performances – Marcienne Dwyer in the leading role is strong through the film, we see her go through the range of emotions as her character becomes more complex as the film unfolds. When it comes to the rest of the cast they do hit their characters well and look like they fit into the horror genre.

Story – The story follows six people that entertain a horror theme weekend of fun that soon spirals out of control as one of them finds themselves alone and wondering if this is real or not. This is an interesting story to watch unfold, we are entering a world where horror films exists which is important for the way of surviving what is happening. We will be left to wonder if this is real or not which is just what we want. This is a simple enough story that will keep us guessing and waiting to see how the events unfold.

Horror – The horror in this film comes from knowing horror movies, which will see how the group look to survive the events of a horror film.

Settings – The film uses the settings that are known in horror, including the woods which is one of the easiest slasher locations in horror.

Special Effects – The film uses practical effects to achieve everything it wants to during the weekends events. 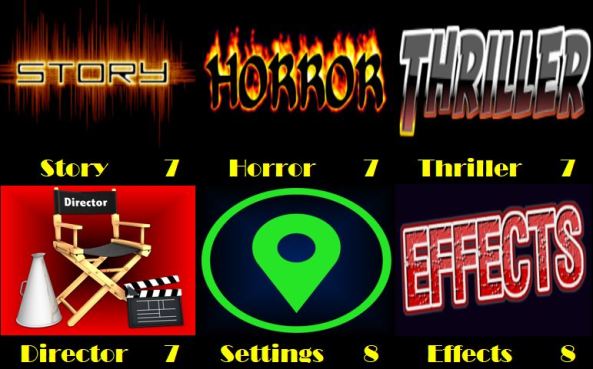 Scene of the Movie – The beach.

That Moment That Annoyed Me – The supporting members of the group feel too generic for the genre of horror.

Final Thoughts – This is a fun horror that really does try to push the limits of the audience by showing us just how people can become affected by a horror weekend event.