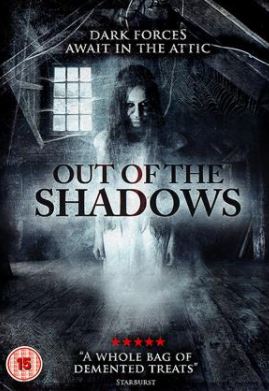 Plot: Cynthia O’Neil enters a haunted asylum known as the Madison Seminary in search of her father who went missing in the asylum while shooting a reality television show.

Story: Out of the Shadows starts as we follow a paranormal investigation team looking to recruit the only known survivor Carter (Kellogg) to join them as they search the answers about what happened on his famous activity tape.

With the team in place the teams sets up the cameras around the asylum with team member Cynthia (Morrison) getting the first does of activity in a communication from her father, whom went missing in asylum with Carter’s team. Using her as bait the team record her time inside the asylum as they look to explain the unexplainable.

Thoughts on Out of the Shadows

Characters – Carter is the lone survivor from a previous encounter inside the asylum, he goes back but could have his own motivation for this. Cynthia is searching for her father who went missing but the rest of the characters are just another mix of the crew you would expect on a paranormal investigation team.

Performances – The performances across the board are not the best, the crew does feel like it could be a real documentary crew at times but then other times its just a group of actors trying to overreact to everything going on.

Story – The story does have a good twist, which is the only interesting part of the story, it is nearly 90 minutes investigating the shadows with too many characters to follow, it gets difficult to follow the characters in the dark for the most part and as for the reasoning behind everything well, it doesn’t seem to have one.

Horror – The horror is a lot of jumping at the camera or activity happening behind the camera, it isn’t scary but will give you a forced jump.

Settings – The film could easily have only had one setting, the asylum but going back to the motel makes it feel like the evil could escape which does try to make it stand out from just a haunted asylum movie.

Special Effects – The effects are what you would expect for a found footage film, they work without being ground breaking.

Scene of the Movie – Welcome to the Devil’s Toy Box.

That Moment That Annoyed Me – The scares were too random.

Final Thoughts –This is a disappointing and mostly dull horror movie, the jumps are too random, the characters don’t make smart decisions and found footage only works in places.

Overall: Horror film to skip by the end.