Plot: Twelve-year-old orphan Peter is spirited away to the magical world of Neverland, where he finds both fun and danger, and ultimately discovers his destiny — to become the hero who will be for ever known as Peter Pan.

Tagline – Every legend has a beginning.

Story: Pan starts when young Peter (Miller) is in an orphanage in London during World War II, he notices that the other orphans have been disappearing, when he final abduction occurs Peter is taken by Blackbeard’s (Jackman) men and taken to Neverland. Blackbeard is mining for fairy dust and using the orphans to make this happen.

When Peter breaks the rules he is sentenced to death which only unlocks his own powers to fly, where a fellow prisoner James Hook (Hedlund) helps him escape and search the land for answers about his mother with the help of the tribal people led by Tiger Lily (Mara) who have been at war with the pirates, Peter must unlock his own destiny to save the land.

Characters – Peter is an orphan during World War II, stuck in a boys home, he believes something is happening and wants to be reunited with his mother, taken to Neverland, he learns that he has an ability unlike anyone else, he just needs to learn to believe in himself. Blackbeard has been taking orphans to help him mine for fairy dust in Neverland, he runs a strict ship which Peter upsets, however this will put Blackbeard closer than ever to getting what he wants. Hook is one of the miners that helps Peter escape, he wants to be free with his own tragic backstory. Tiger Lily has been leading the war against Blackbeard for years now, she knows the secrets to the fairies and now must protect them at all costs.

Performances – Levi Miller as the young Peter is good because he shows us the innocence needed for this film while dealing with the emotional impact his life is having. Hugh Jackman does seem to be having a lot of fun in this role even if he is overacting at times. Garrett Hedlund just can’t catch a break, his performance is solid enough, though it does feel like he just wanted to be the next Han Solo. Rooney Mara again is solid, it looks like a role which meant something to her and will help her take on the bigger roles.

Story – The story is an origin story for Peter Pan and Hook, well it seems to be, Peter is in the human world where he is an orphan taken to Neverland to help fight in a war between the two sides who want control of the fairy dust, he works with Hook which is strange because he is a good guy. The film shows us why Peter never wanted to leave Neverland and just what is meant to him once he learns about his parent’s identity. When we look deeper at the story it does feel like a pretty safe story and by having Peter needing to learn his own identity before going on to be the character we know now. The problem comes from any moment of peril he is in or Hook we know they will make it out of there because we know their story is only just beginning. The additional problem comes from just how Hook is a good guy and doesn’t get given any moments to tease his villainous ways.

Adventure/Fantasy – The adventure side of the film is good because it shows a new life Peter could have away from the war his own reality is involved in, this does take us to the fantasy world of Neverland which only seems to have one unique animal in, but it has magic.

Settings – The film uses the colour tones well, we see the darkness which shows us how bleak Peter’s real-life is, while giving us the bright open world of Neverland to show the hope of a future.

Special Effects – The effects in the film are solid enough without looking as flawless as they should, though the overly ambitious nature to it all doesn’t help.

That Moment That Annoyed Me – Not filling enough of the blanks between the time period.

Final Thoughts – This is another cash-in on a franchise which feels overly done, it doesn’t capture the rue magic and only ends up confusing the time between the movies.

Plot: When an American oil company sets up an experimental drilling plant out in the vast deserts of Mongolia, they awaken a nest. The deadly creatures begin to breed and spread, devouring everyone in their path.

Story: Mongolian Death Worm starts as the American Drilling company in Mongolia (where else could this film be set with this title) have disturbed a creature below the surfaces that the locals believe is a myth that will come and take people. We also have a treasure hunter Daniel (Flanery) that has never made himself popular with the locals apart from the Sheriff Timur (Cheung). To increase the stakes, we also have a village with an outbreak of a virus that the charity HOPE and Dr Alicia (Pratt) are trying to cure must pay Daniel to take them to the village.

When the myth turns out to be true everyone must put aside their differences to fight to survive from the Mongolian Death Worms that are growing in numbers through the desert.

Characters – Daniel is a treasure hunter searching for the burial grounds of Genghis Khan but has made his own enemies in the land but also knows how to handle himself, he isn’t the kindest of people always doing things for money over the right reasons, Alicia is a doctor that has been helping the locals of Mongolia with a virus outbreak and she is willing to die to save these people. Timur is the sheriff that is one of the few people that enjoys the company of Daniel and understands that he is harmless at heart.

Performance – Sean Patrick Flanery does seem to have fallen from the graces where he was about to make it to the big time but he is the star of this show. Victoria Pratt is fine in the supporting role with the brains and beauty needed for the film and George Cheung gives us the laughs when needed.

Story – The story does mix myth with legend when it comes to dealing with new inhabitants to a land that must face the idea that a myth isn’t just a myth and must work together to defeat a creature in this case a Mongolian Death Worm. This is an easy to watch story as it is mostly a group of people needing to battle an unknown enemy before they take over the local area.

Action/Horror – The action is mostly chases through the film which works when it comes to the enemies the people are facing with the horror side of the movie all coming from the creature feature idea which is always a lot of fun to watch.

Settings – The film is set in Mongolia but this looks like it could be anywhere in the USA or anywhere that has dirt roads.

Special Effects – The effects are better than I was expecting but still within the budget of a TV movie. 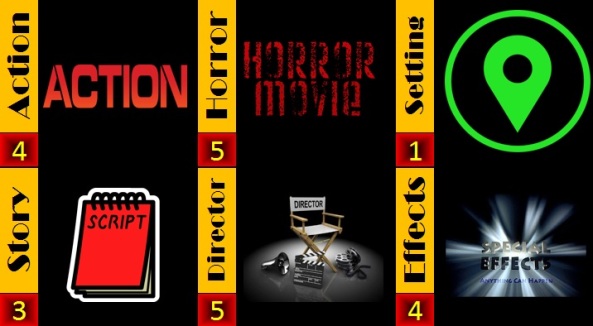 That Moment That Annoyed Me – The film could have been filmed in any location it wouldn’t have made a difference.

Final Thoughts – This is a simple creature feature that is a lot better than what I was expecting without being one of the best creature features you will see, I do think the fact it isn’t laughably bad does hinder it though. 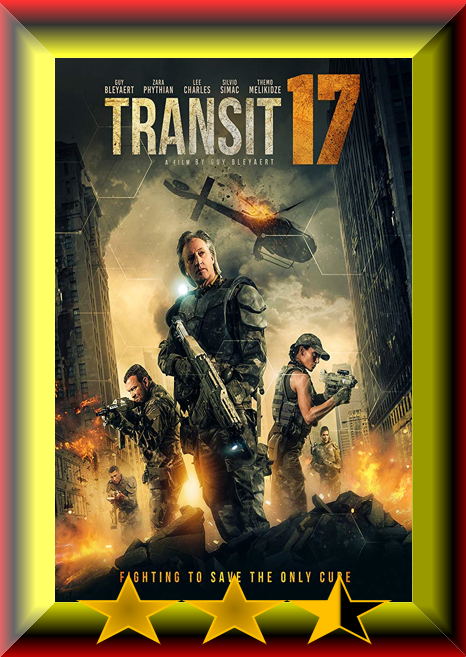 Plot: After a virus infected France, Belgium and the Netherlands a team of resistance soldiers trying to safe a young girl who seems to be their last hope for a cure.

Verdict: Escape from New York Meets The Last of Us

Story: Transit 17 starts when Tex (Bleyaert) and his team Eve (Phythian), Brad (Charles), Deena (Stahl) and Daniel get assigned to a rescue missing in Belgium, in a world where a virus has wiped out most of the population. The team knows the threats they will be facing, with infected hunting them down, but the mission is worth the risk, as it could lead to a cure to save the whole world from becoming completely wiped out.

Characters – Tex is leading the team on the mission, the rest of the crew will trust him to make the right decisions no matter what, he does have to make difficult decisions, but knows that this mission could change everything. Eve and Brad are both big parts of the team and feel like most soldiers we have seen in most film like this, the characters we do meet are soldiers and military people that are preparing for the operation and add in the 15-year-old they must try to save.

Performances – This is a film where the performances are not going to be seen as it strength, one of the problems here comes from nearly all the characters being portrayed as serious, which makes everybody too similar, not letting any of the actors make their character standout in anyway.

Story – The story follows a group of soldiers who go on a mission to save a teenage girl in an infected virus world that could hold the cure for the world. The story does seem to borrow from the ideas behind Escape from New York, with the team needing to rescue somebody in danger and also the game The Last of Us, which focuses on the idea one person could be immune, which would be key to the survival of the rest of the humans. While the story flows well enough, the characters just feel under developed, with them being too similar and most situation being simple action that just ends up coming off like something that doesn’t want to risk anything.

Action – The action doesn’t get to any level of intensity, which does leave us not getting excited about the bullets flying around.

Settings – The film tells us we are going through parts of Belgium, only we don’t really get to see anything other than strongholds in the survival from the infected, using now iconic locations through the film.

Scene of the Movie – Look at the bite.

That Moment That Annoyed Me – We just don’t get the level of intensity we could have.

Final Thoughts – This is a simple action film that borrows from a couple of major properties, only it just doesn’t end up getting to the levels of intensity that it could have by the end of the film.