Plot: Stranded after a tragic plane crash, two strangers must forge a connection to survive the extreme elements of a remote snow-covered mountain. When they realize help is not coming, they embark on a perilous journey across the wilderness.

Tagline – What if your life depended on a stranger?

Story: The Mountain Between Us starts when Ben (Elba) and Alex (Winslet) are trying desperately to get home, but a storm has put a hold on those plans with the planes delayed for the day. The two make a deal to let pilot Walter (Bridges) fly them home, but mid-flight he suffers a stroke and the plane crash lands in the snow-covered mountain range.

Ben and Alex survive the crash and must learn to work together to survive against the harsh weather conditions and nature hidden in the mountains or face certain death.

Thoughts on The Mountain Between Us

Characters – Ben Bass is a surgeon, he needs to get back to New York to perform an operation, when the crash happens, he focuses on aiming to stay at the crash site believing he will get rescued, reluctant to follow Alex’s idea to find their own way out. His skills as a doctor are key to survive this one. Alex is a photographer heading home for her wedding, she does get hurt in the crash and wants to go in search of help rather than wait. These two are professionals that make decisions based on logic over panic which is why even if they are opposite, their discussions make sense.

Performances – Idris Elba and Kate Winslet are the only ones that get any major screen time, they are both great in this film as we see them both playing to their strengths.

Story – The story here follows two strangers who are involved in a plane crash in a mountain range and must put their differences a side to survive while searching and hoping for rescue. This is a survival movie at heart with a weak romance movie on the side, we go through the normal can they survive situations, each one becoming deadlier as they go along and leaving us guessing how rather than if they will get rescued, it seems to clear to say that they won’t make it because of it only being a two person. The fact that the dog is the most interesting character doesn’t help us out here and the timing we go through just seems weak when it comes to telling us how long they have been there, we get the odd scene, but learn nothing about moments inbetween.

Action/Adventure/Romance – The action comes from the scene in which the plane crashed, it is shot well but is the only one we see. The adventure side of the film shows us just what the two must go through to survive their ordeal. The romance between them seems to just get tagged in for no particular reasons.

Settings – The film puts us in the middle of nowhere in a mountain range, it looks stunning with views from the top, the biggest problem with the setting is we just don’t get the full scale of the situation.

Scene of the Movie – The crash scene.

That Moment That Annoyed Me – Not explaining the time period there are lost for.

Final Thoughts – This is a standard movie with a simple story that gets everything it needs to in the film without being anything overly memorable. 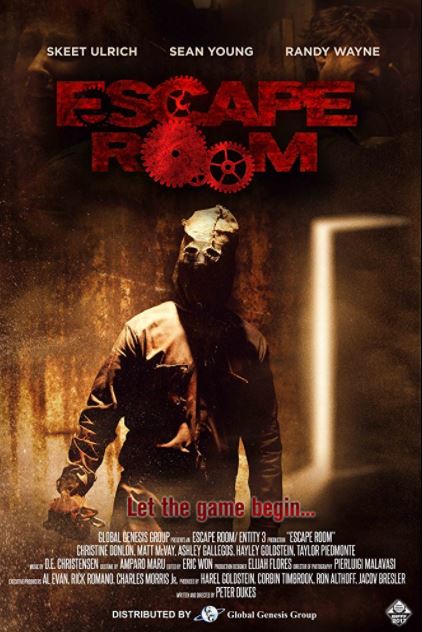 Plot: Six friends test their intelligence in a game that takes a dark turn.

Tagline – Four friends. One room. One hour. One killer.

Verdict: Could be Better

As the hour long experience starts, it seems to be going well until the mysterious killer in the room turns out to be a real killer, leaving the friends needing to figure out how to escape before the time runs out.

Characters – Brice is the owner of the escape rooms, he has been struggling of recent times, but with this latest player he hopes to improve his rating. When the camera goes out he is left wondering what will happen to his reputation if he opens the door early or what is going on. Ramona is the owner of the mysterious box which opens the doors for the nightmare. Jess is one of the reluctant contestants in the game because of her boyfriend’s eagerness to play, she must use her own puzzle solving skills to make it out alive.

Performances – Skeet Ulrich became a horror icon with his performance in Scream, here he just looked mostly lost in the leading role, because he is meant to be on edge and you never feel it. Sean Young is more of a cameo performance which could have been done by anyone. The younger stars do there best to make an impact and due to the basic characters we never see their performance skills.

Story – The story here shows us what would happen is an escape room experience went terribly wrong, with possession being a key part of this. The problem here is that, this real-time experience doesn’t feel real time and having to watch someone on the outside just makes us think lawsuit. The supernatural side is never that believable and by the end this does feel like an easy escape room to get out off.

Horror – Being locked in a room with a killer is always going to throw horror in our faces, this movie shines from that idea, but then it also holds back too much.

Settings – The film is mostly set in the one location, the escape room and if it was only set there I would say this is an excellent use of setting, but seeing events outside just drags us down.

Special Effects – The effects are god enough for the film, we get the basic blood and gore working for the film.

Scene of the Movie – First kill.

That Moment That Annoyed Me – Not enough focus on the real-time events.

Final Thoughts – This would be a good enough late night movie, it is short and sweet which will feed the horror fans enough.