Movie Rob’s pick here, head over to his site to read more reviews 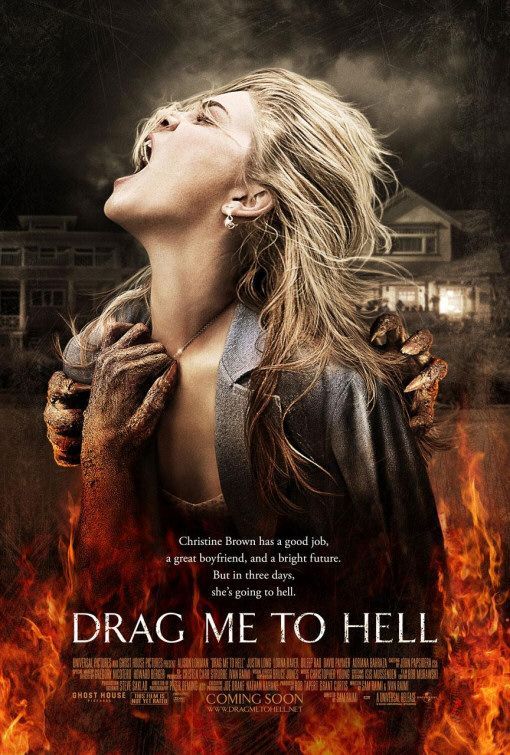 Brief Synopsis – A young ambitious loan officer rejects an extension on a loan form an old woman and has a demonic curse placed on her.

My Take on it – As a film lover who is not a big fan of horror films, this was a hard month for me to choose what movies to watch for this series.

This is actually a movie that I recalled going to see on a date over a decade ago because the girl was a horror fan and I decided to indulge her wishes to see it.

I even recall inquiring why she loves horror genre so much and her response was “because it is so unpredictable and anything can happen at any point in time.”

This film actually has an intriguing plot that works most of the time and stays entertaining.

Unfortunately, it probably could have been a bit more impactful, but still manages to get across what it attempts to.

The story remains unpredictable throughout and finds ways to keep surprising as things move along and the story unfolds.

Allison Lohman is an interesting choice as the lead especially since she feels so miscast in the role yet excels in every scene she is given.

As expected from a Sam Raimi horror film, this movie has a fair amount of blood and gore that might seem a bit excessive yet helps make this even more horrific along the way.

The film has lost of twists and turns along the way that helps keep it feeling fresh and interesting as the story gets more and more intriguing especially given the fact that we never truly know where things are heading.

Bottom Line – Interesting idea that works most of the time, but fails to really be more impactful. The way that the story remains unpredictable is done quite well and keeps things surprising as the story unfolds. Lohman is quite good in the lead because she seems so miscast and that helps keep things intriguing as the plot thickens. The amount of blood and gore is on par with what one should expect from Raimi even if at some points if feels excessive. The story stays full of twists and turns that helps keep it enjoyable throughout. Recommended!

MovieRob’s Favorite Trivia – In the movie, Shaun San Dena (Adriana Barraza) mentions her late husband Sander, a reference to both Sam Raimi’s older sibling, Sander Raimi, who died in a swimming accident at age fifteen while on a trip to Israel, and his oldest nephew, Sander Rubin. (From IMDB)