Plot: After a freak accident, a yuppie turns invisible and runs from a treacherous CIA official, while trying to cope with his new life.

Tagline – Women want him for his wit. The C.I.A. wants him for his body. All Nick wants is his molecules back.

Story: Memoirs of an Invisible Man starts when a cocky businessman Nick Halloway (Chase) tires to catch a nap during a busy meeting, that he has no interest in, he finds himself caught in the middle of an experiment gone wrong, by being turned invisible. This brings CIA agent David Jenkins (Neill) in to investigate, with Nick becoming a wanted man, only he can’t ask for help because even he doesn’t understand why he is invisible, he tries the people he trusts in hopes of finding out the way to reverse what has happened to him.

Thoughts on Memoirs of an Invisible Man

Characters – Nick Halloway is a fast-talking businessman that has been getting away with slacking through his job for years now, after another session on the drinks, he looks to skive off, only to get caught in the middle of an experiment which turns him invisible, Nick must figure out who he can trust to help him after the CIA look to hunt him down to use him for their own benefit. He isn’t the most interesting character, he doesn’t come off as funny as it seems he should be either. Alice is the new woman that comes into Nick’s life, she is the one he turns to for help as she is prepared to listen to his story over most other people. David Jenkins is the man hunting down Nick, he is a CIA agent that will do whatever it takes to add to the security of the country, seeing Nick as the next generation of secret agent.

Performances – Chevy Chase does feel slightly mis-cast in this role, he doesn’t seem to handle the comedy on the level it is meant to be coming from his character. Daryl Hannah does all she needs to as the love interest, she doesn’t need to do much either. Sam Neill is highlight of the performances with just how he handles the evil agent.

Story – The story follows a man that gets turn invisible in a mysterious event, seeing him being chased down by the government while he tries to figure out how to get out of his situation. This is an interesting spin on the invisible man story, it does try to make the story a comedy which is where the story falls short, because it is an unlikable character that gets turn invisible rather than somebody whose experiment going wrong. Nick doesn’t just anything to help himself, which disappoints, it does feel kind of cheesy and by the end you will feel like not everything is answered.

Comedy/Sci-Fi – The comedy misses more often than hitting, it just doesn’t seem smooth. The sci-fi elements don’t get bought to the front with incident happening and that being it.

Settings – The film is set in San Francisco which does always make for a solid back drop for any movie.

Special Effects – The effects in the film do feel great for the time with certain moments, the make-up shot is the highlight because of camera angle.

Scene of the Movie – Let’s try make up.

That Moment That Annoyed Me – The comedy.

Final Thoughts – This is a comedy that does miss a lot of the jokes and ends up feeling flatter than it should have been. 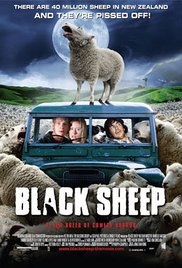 Story: Black Sheep starts as Henry Oldfield (Neister) returns home after 15 years away after suffering a traumatic experience at the hands of his brother to sell his half of his family farm. Angus (Feeney) is the brother that remained on the farm running it and performing genetic experiments. When environmentalists Grant (Driver) and Experience (Mason) try to expose what is going on, on the farm they accidently release a mutant sheep that starts infecting the rest of the sheep on the farm.

When the infected sheep start to increase Henry, Experience and farm manager Tucker (Davis) must find a way back to safety while having to fight off seemingly endless amounts of sheep.

Characters/Performance – Henry is the successful brother that gets traumatised when he is young, now grown up he comes to back to the farm to collect his part of the money. When he learns the truth, he must now face his nightmares and fight off the killer sheep running over the farm. Angus the brother that has been experimenting on sheep for his own personal gain, this puts his own life and members of his farm. Experience is the environmentalist that wants to expose the farm but she quickly turns when she needs to fight to survive.

Performance wise, each performance adds to the comedy being told through this film, no one is great but they all know just how to get the extra laugh needed from their characters.

Story – Only in horror could you come up with an idea of genetical altered sheep that will try to kill people. If you watch this story with this in mind, you will truly enjoy this story because it is just that bonkers it works.

Horror/Comedy – The horror would be, how scary do you find sheep? Well what about killer mutant sheep, that is your horror side to the story but this could also be used to describe the comedy involved in this film too.

Settings – The film is set upon on the farm which is good for the horror isolation side of the film as they must use the land to fight the sheep off.

Special Effects – All the effects are practical and all come off looking fantastic when you look to add the extra element of gore to the film.

Final Thoughts – This is one of those horrors you can put on and enjoy because the laughs and idea are so farfetched you just must laugh to get through it all.