Plot: Astronaut Roy McBride undertakes a mission across an unforgiving solar system to uncover the truth about his missing father and his doomed expedition that now, 30 years later, threatens the universe.

Tagline – The Answers We Seek Are Just Outside Our Reach

Verdict: Mission Out of This World

Story: Ad Astra starts when astronaut Roy McBride (Pitt) survives a fatal power surge that destroyed more of his solar space station, Roy with the reputation of never having panicked during any situation in his life remained calm and has been selected for a top-secret mission.

Roy must travel into space to locate his long-lost father Clifford McBride (Jones) whose craft seems to be the source of the power surge before it disrupts everything back on Earth. 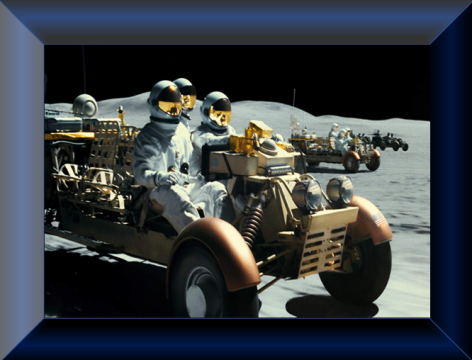 Characters – Roy McBride followed in his father’s footsteps becoming an astronaut, his ability to remain calm with his heart rate makes him one of the best candidates for most missions even if this has made his rational thinking making him emotionless towards the world, including his own wife. When he learns his father might still be alive in the depths of space, he gets assigned to try and communicate with him, which sees him travelling across the solar system, where he must face his own emotions of being left at a young age by his father. This is his story, he is the character we learn the most about through the film. Eve is the wife of Roy, she hasn’t gotten as much love from her husband, which has seen her wanting to leave him because of his travelling decisions. Helen is one of the people that Roy meets on his mission, somebody that does show him a truth about the mission unlike anybody else. Clifford McBride is considered a world-wide hero for his mission into the depths of space, his mission did mean that he became distant from his son because of the fact he left him on Earth, he is thought to have gone missing until the power surge seems to come from his own ship, leading to the mission across the solar system.

Performances – Brad Pitt is brilliant in this role, where he steps away from his cool persona which he bought us in ‘Once Upon a Time in Hollywood’ to give us a much straighter, distant, but brilliant character whose actions is what keeps us wanting to see more from him. While Brad Pitt might be fantastic, it is the supporting cast that are great without being fantastic, mostly due to most not having many scenes, with most being part of the journey, rather than on the journey.

Story – The story here follows an astronaut that must travel across the solar system in an attempt to figure out what happened to his father’s mission and why there is a power surge that has become a threat to Earth coming from his last known location. This story is a tale about one man that gets a chance to communicate with his father after spending years believing he is dead, lost to space, only to learn of a bigger picture to his mission as he must learn to recontrol his emotionless character before he becomes a problem on the mission. The pace of the story does flow nicely as we learn things as Roy does, which does change his mindset along the way and it does show how big the mission is. There are a couple of issues with the story, with one being the length of the journeys, the second would be the fact that we do get a random side mission, which doesn’t need to be here. Overall the story is interesting to see, it keeps the science behind the story seeming not to distant, with the launches being like what we would see now, even if certain parts are meant to be commercial.

Mystery/Sci-Fi – The mystery in this film comes from us and Roy wanting to know what Clifford discovered in the depths of space, which does play into the sci-fi side of the film, with the idea of the human race wanting to find life in the galaxy, expanding the position from just being on Earth, with the first steps with bases on the Moon and Mars, though most of the technology ideas are where we would see us going in real-life, none of this hyper sleep concept yet.

Settings – The film does use the different locations through space to be what we would imagine, with the moon looking like the lifeless place, Mars being filled with the reds and the crafts looking like they would be the ones used to travel through space, we feel the empty vacuum of space.

Special Effects – The effects in the film are brilliant, they obey the rules or space, giving us some of the best visual backgrounds to the mission’s journey too.

Scene of the Movie – Moon Rovers.

That Moment That Annoyed Me – Certain camera angles or point of views could have been better for the impact of the scene.

Final Thoughts – This is one of the best and most visually pleasing movies of the year, it has a fantastic performance from Brad Pitt in the leading role and keeps the science of the space travel feeling a lot more grounded than many of the film from the past.

Overall: Out of this world. 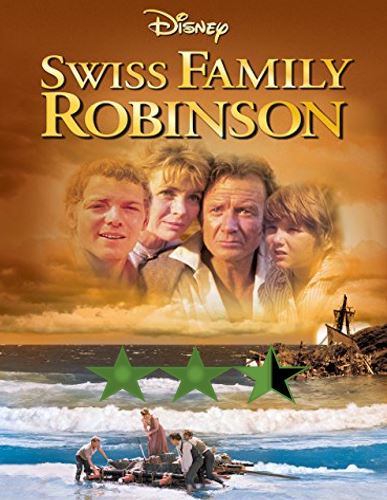 Plot: A Swiss family must survive being shipwrecked on a deserted island.

Story: Swiss Family Robinson starts when the Robinson family, Father (Mills), Mother (McGuire), Fritz (MacArthur), Ernst (Kirk) and Francis (Corcoran) see their ship crash on rocks with the rest of the crew abandoning ship, the family finds a small island filled with wildlife from around the world, where they build a safe haven for themselves.

As the family starts to explore the island more, they discover pirates, rescuing one of the hostages Roberta (Munro), the humans must learn to survive on this island with the dangers around them.

Characters – Father keeps everybody in order as he must keep his family safe before worrying about the livestock on the ship, he uses his skills to build a home for them, one that will keep them safe and be able to see anybody arriving to rescue them. Mother is all about the safety of the family especially the youngster member, she is still written to mostly be a housewife within this situation. Fritz is the oldest child of the family, he is the hands on type that will help his father build the new home, while Ernst is the brains of the family. Roberta is the woman that the boys find captive on the island, they rescue her and suddenly she is just a damsel in distress.

Performances – John Mills as the oldest member of the family is the strongest member of the cast, Dorothy McGuire and Janet Munro are badly written, so they struggle to make anything of their characters, while James MacArthur just seems to complete the cast without any major impact.

Story – The story here follows a family that get stranded on a tropical island and must learn to survive the dangers they find on the island and the visitors that might put their lives in danger. This is adapted from the famous novel and adds in a couple of twists to give the story more excitement. It does show how a family as a unit can work together to survive and any disturbance to the system will become difficult to overcome, with the idea that just capturing the animals is casually ok, when it clearly isn’t. this does however capture the sense of adventure the family has created from their escape from the life they were living in.

Adventure – The adventure side of the film shows us what the family is going to be living in, with the tropical island showing what they can discover in the unknown.

Settings – The film is set on an island, which is filled with different animals from around the world, it is a beautiful location and easily the highlight of the film. 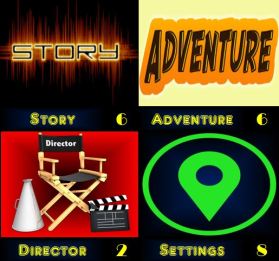 Scene of the Movie – The battle.

That Moment That Annoyed Me – Francis, the whole film, the animal treatment and the poorly written female characters.

Final Thoughts – This is a very dated movie that comes from a classic novel, which is filled with the problems Hollywood once had, even if the sense of adventure is told wonderfully. 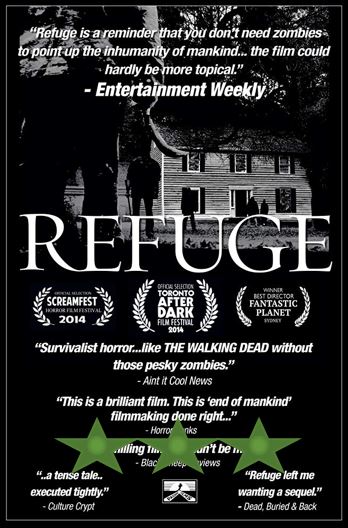 Plot: Refuge is a suspense-thriller about a family struggling to survive in the wake of a great catastrophic event.

Story: Refuge starts as we learn of the mysterious virus which has spread across America, there is no cure, you just need to survive away from people, we meet one family Jack (Roy) Nell (Rutberg), Birdie (Kellner) and Kyle (Kies) do what they can to survive, while giving Birdie some sort of childhood.

When the threat or marauders comes to the home, the family must make the rash decision to go in search of a new sanctuary through the woods which is where they will face a new amount of threats.

Characters – The characters focus on a family, Jack the father, the man that will do everything to keep his family safe, even if it means taking risks by saving strangers, he doesn’t back down from enemies or threats, but is forced into decisions he doesn’t want to make. Nell is the wife and mother, we don’t really learn too much about her though, she falls in the woman being protected circle. Birdie is the daughter that doesn’t fully understand the world and wants to just be a child in this world. Kyle is one of the people that Jack has saved in the past.

Performances – The performances from the cast are great throughout, we feel their bleak outlook on the life they are living which is what we want to see, the final act shows them at their best too.

Story – The story here follows a family in a post-apocalyptic world where the biggest threats marauders and the virus that has wiped out most of the world. This is a bleak story that helps show us just how desperate the world now is and not having any sort of zombie side to everything giving us the only enemy the human one. This keeps everything simple because it is all we need, even though it does follow the typical mistakes being made by the characters.

Thriller – This does try to keep us on the edge of our seats about whether our characters will survive and what is next in line for them.

Settings – The film keeps us in the bleak locations from start to finish, they show where people will survive and keeps us away from the big city.

Scene of the Movie – The break in.

That Moment That Annoyed Me – Just shot them.

Final Thoughts – This is one of the best looking bleak virus outbreak movies, it does have questionable character decisions but that does add to the drama.