Plot: In 1872, an embittered gunslinger named John Henry Clayton attempts to make amends with his estranged father Reverend Samuel Clayton while their community is besieged by ruthless land-grabbers.

Tagline – Haunted by his past, searching for peace.

Story: Forsaken starts when John Henry (Kiefer Sutherland) returns to his family town where his father Reverend Samuel (Donald Sutherland) has a strained relationship due to him not returning to help his mother on her deathbed.

With the Clayton’s discussion their own beliefs in God, James McCurdy (Cox) has taken over the town and starting to expand his empire with Dave Turner (Wincott) doing his dirty work, John refuses to go down without a fight and decides to challenge the rule of the town.

Characters – John Henry Clayton left his town for war, he never returned until his mother died, he has become distant from his father not believing in God, the town does fear his actions in the past, which has made him the threat to the gang controlling the town and when things become personal, he becomes the man people need to fear. Reverend Samuel Clayton is respected in the town which he has made a place believing in God, he doesn’t like his son returning, but learns that he hasn’t for a good reason. James McCurdy is the man running the town, he lets his men kill to get the property he wants. Dave Turner is one of the men that works for James, one that does play by honour over many of the shot first men in the gang.

Performances – Kiefer Sutherland in the leading role is fine, though his mumbling doesn’t help us care enough his character, opposite his father Donald who isn’t the most entertaining either. Michael Wincott was the most interesting character because he seems to get some development and want to see more from him. Brian Cox feels completely wasted in his role that gives him nothing.

Story – The story follows a man returning home with a reputation while he needs to learn how to make a stand to protect his town which has become a problem overrun by a gang of outlaws. This does follow the generic idea of a returning man helping clean up his town without offer anything new, it keeps us seeing how the action are building up to the problems that will be facing before the final showdown. The pacing does become slow which does make things unfold at a snail’s pace which just doesn’t keep our attention for long enough.

Action/Western – The action does feel flat, we just don’t get enough of it to make us believe it is action heavy movie, though the mood makes us feel like the western we are entering.

Settings – The film does make us feel like we are the small town which has a community feeling about it.

Scene of the Movie – Dave doesn’t like his men not following orders.

That Moment That Annoyed Me – The mumbling from Kiefer.

Final Thoughts – This is a slow paced action western movie that just never gets going and ends up feeling the pace taking age to get through. 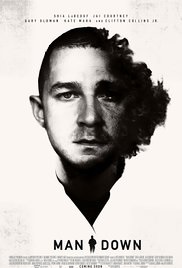 Plot: In a post-apocalyptic America, former U.S. Marine Gabriel Drummer searches desperately for the whereabouts of his son, accompanied by his best friend and a survivor.

Story: Man Down starts in a post-apocalyptic America as we follow Gabriel Drummer (LaBeouf) and his best friend Devin Roberts (Courtney) searching for Gabriel’s son, we flash back to his marine training through his conversations with Counsellor Peyton (Oldman).

Through the film we learn how Gabriel handled himself in war when he lives his wife Natalie (Mara) and child Johnathan back in America, how he is prepared for this post-apocalyptic world that America is now and how far he would go to get his son back.

Thoughts on Man Down

Characters – Gabriel is a marine that believed he was fighting for the right thing but when the war came to America when he was away, he must search the destruction in hope of finding his son. Devin is the best friend and marine to Gabriel, he supports him through his missions and search for his son. Counsellor Peyton is the man learning about the mission that went wrong, as we learn that his mindset might not be as clean as we are led to believe.

Story – The story is told in four parts, as we follow Gabriel in his home life, war time, meetings with a counsellor and in the post-apocalyptic time, these timelines only confuse the story telling process as by the end of it we will find ourselves wondering just what actually happened to these men, what is real and what is not. By the end you will understand what happened but it does make certain parts feeling random, but the true message is important.

Thriller – The thrilling side of the film does feel slow in places, it shows us certain moments only to make a complete switch in the final act.

Settings – The settings do help keep us in the different location for each moment of the story, we can identify with each part of the story we are watching too. 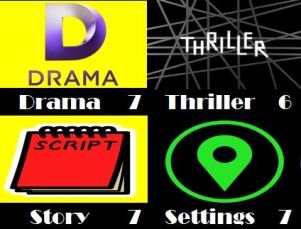 Scene of the Movie – The final act, and how it is shot is beautiful.

That Moment That Annoyed Me – A lot of what we see is not as important.

Final Thoughts –This is a standard movie for the most part, it starts being confusing for the first hour but when it unfolds you will be taken back where this movie goes.