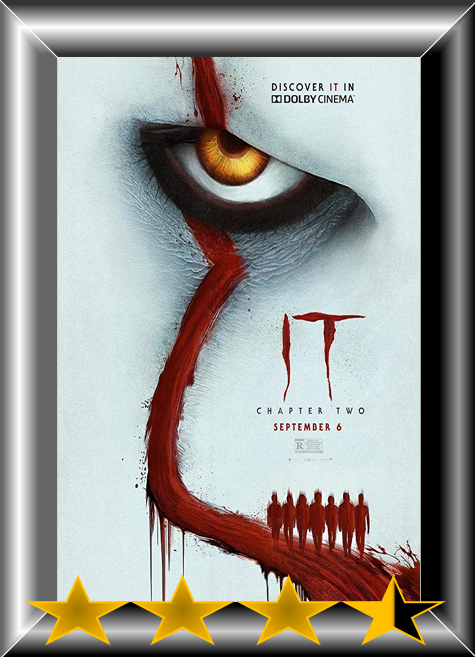 Plot: Twenty-seven years after their first encounter with the terrifying Pennywise, the Losers Club have grown up and moved away, until a devastating phone call brings them back.

Tagline – Witness the End of It.

The friends must unite, remember their past and face their fears to take on Pennywise to hopefully end it all forever and save the town of Derry. 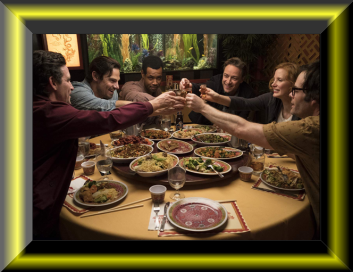 Thoughts on It Chapter Two

Characters – Bill was always considered the leader of the gang, he went onto write books and coming back he must face the fear about his brother’s death. Beverly has married an abusive rich man that she wants to escape from, which sees her return to Derry, where she could recapture her own love interest from childhood. Richie is a stand up comedian that is just how you would imagine him to grow up to be like, he gets plenty of laughs through the film. Mike never left Derry, he has been studying how to defeat Pennywise once and for all, he calls everybody back to the town. Ben was the fat kid, he transformed himself and became an architect with great success, he will see this return as a chance to tell Beverly how he feels. Eddie is reluctant to return though it does get him away from his wife, that is just like his mother, he will need to overcome the fears which have held him back before. Stanley is one of the group that doesn’t return, he has his reasons and it poses the reality of what will come with returning. Pennywise is the evil figure, who mostly looks like a clown, though he can become anything he wants to play into the fears. It is strange that we just don’t get that invested in the adult versions of the characters.

Performances – Jessica Chastain and James McAvoy are the two biggest names in the film, they are both fine, because nobody is a true main character, the two could do more and McAvoy is difficult to watch because his choice of accent reminds me about the 10-year-old he plays in Split. Bill Hader and James Ransone are the stars of the returning characters, they still have great chemistry. Isaiah Mustafa and Jay Ryan are both solid enough, though the characters seem to have swapped around.

Story – The story is the second part of the massive book, it follows the adult versions of the losers club that must return to fight Pennywise once again. This is a very long story, it is just under 3 hours long, which does feel like it drags along at times, once problem comes with more flashbacks with hauntings, there is no peril here, because we know the adult versions live. One of the strengths in the film is the idea of being reunited after years away with friends, it does feel natural and just how you would imagine it being. One of the issues I found in the first film was that Ben was the one that spent time learning the history of the town, while Mike did barely anything, it confused me because I always remembered it being Mike that understood the history, here it is Mike and Ben doesn’t seem to care anymore, add in the weird love triangle and you will feel like we have more that didn’t need to be here too.

Horror – The horror side of the film follows the hauntings that both the kids and adults go through, it is more just separate characters getting haunting throughout. Nothing feels as scarier as the first one was.

Settings – The film takes us back to Derry, we do get flashbacks with other moments that make sense and return to the old places where the scares happen.

Special Effects – The effects are brilliant in places, though it does feel certain CGI moments just don’t work.

Scene of the Movie – Richie’s memory.

That Moment That Annoyed Me – James McAvoy’s accent.

Final Thoughts – This is a bogged down horror that just is way too long to get the best out of the scares, just like the mini series, it fizzles out.