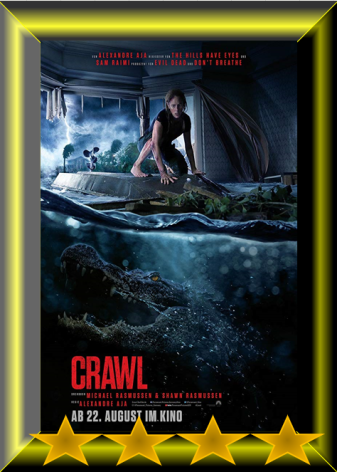 Plot: A young woman, while attempting to save her father during a category 5 hurricane, finds herself trapped in a flooding house and must fight for her life against alligators.

Tagline – DANGER! Alligators are common in this area. They can be dangerous. They have been known to stalk prey. THEY WILL HUNT YOU

Story: Crawl starts when college swimming student Haley (Scodelario) who after a family disagreement with her father Dave (Pepper) hasn’t spoken to him in a while gets a call from her sister Beth (Clark) to make sure their father is out of Florida after a hurricane has taken a turn to put him in the path of the destruction.

Haley arrives back home, bringing back the memories with father and his training to make her an elite swimming, only to find him injured in the crawlspace, where he has been a victim of an alligator attack, the two find themselves trapped against the alligators, with the flood water rising and time running out, can they make it out, that is the question. 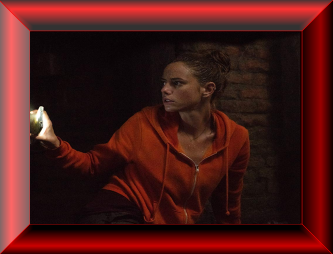 Characters – This is a film that only really has two characters in, we have Haley who is a college student on a scholarship for her swimming, she has been training her whole life and is starting to question her place in the sport going forward, she reluctantly goes to make sure her father has gotten out of Florida before the hurricane hits and here she must put aside their differences to face off against the alligators that are looking to feed. Her swimming skills do come in crucial when it comes to staying ahead of the gators, but she does fall into the stupid decisions being made. Dave is the father that has buried himself in work after his wife left him, he had spent most of Haley’s childhood coaching her to be the best in swimming, with them both getting success, he has however become injured due to the attack and helps his daughter to escape, so they can rebuild their relationship. Where the two have been going through a strained relationship, it does show how the working together process isn’t working well to start with and as they rebuild their relationship, we see just how well they can work together.

Performances – Kaya Scodelario in the leading role is strong for the most part, we get to see how she manages to look like she isn’t completely in a comfortable place with her future and that she will never give up the fight. Barry Pepper, despite spending most of the film injured, does bring us a strong performance too which shows us that both the main stars of the film do carry the load well.

Story – The story here follows a father and daughter that find themselves trapped in a crawlspace where they are being stalked by alligators, making walking out difficult, while also being in the path of a hurricane which will see them below water sooner rather than later. When we break down this story, we do have a creature feature film that does see man versus nature, with it being both natural disaster and a living predator. This is a battle to survive which does feel intense, even if the trailer does give away most of the film’s story, which is highly disappointing to see. This story does keep the pace up and does have the side of the story which sees the family needing to put aside their issues to make it out.

Action/Horror – The action comes from the alligator attacks, they are intense and show just how deadly they can be, this is a horror that wouldn’t be terrifying to live through, this all shows just how deadly of a predator alligator can be.

Settings – The film is set in one location, the house where Haley grew up, starting with a large part inside the crawlspace under the house, it is contained, and you can understand why the gators would be in there too.

Special Effects – The effects when it comes to injuries are brutal to watch, with one scene involving a leg being placed back together standing out, the alligators look terrifying too through the film.

Scene of the Movie – Boat wave.

That Moment That Annoyed Me – Does nobody in Florida know how deadly Alligators are?

Final Thoughts – This is a fun and intense creature feature that doesn’t hide away from the blood and will keep you on the edge of the seat.