Plot: A coming-of-age story about the complexities of young romantic relationships.

Tagline – Thirteen Friends. One Night to Get it Right.

Story: Summer Night starts as we head to a small American town, we go on to meet the young adults in Andy (Chatwin), the newly pregnant Mel (Tipton), Lexi (Condor), Harmony (Justice), Dana (Hunt), Taylor (McAuliffe), Vanessa (Vidler), James (Coltrane), Corin (Kampouris), Rabbit (Milner), Seth (Nelson), Caleb (Szeto) and Luke (Davis) as they all know each other, they all have connecting stories and spend a typical summer night socialising at the local bar, where the issues get dealt with, from broken hearts, unplanned pregnancy, first dates and old love. 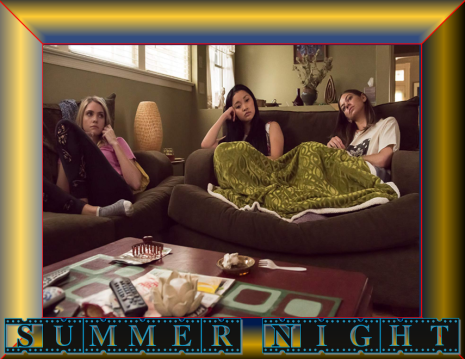 Characters – We do meet a lot of different characters, they do all know each other and they each represent a different version of a young adult trying to balance their romances, these characters do feel like we are jumping into a television drama, because nobody seems like they are a main character and a different story could cover their story in a deeper level.

Performances – The performances in this film are all strong, considering the actors don’t get that much screen time, we see how they are all dealing with different emotions and understand each characters mindset through the performances.

Story – This story follows a group of young adults that are spending their summers having a good time dealing with love and all the things around it over one night. It would be fair to say this could easily be a pilot for a television show by just how the story unfolds, we do meet a lot of characters with each chapter of the film feeling like it could be bigger with longer conversations between the people having moments in their lives. By not having a true main character we are often left wondering why we needed so many characters for a film. Certain points being discussed are serious and do need to be looked at in a serious light too.

Comedy – We do get moments of comedy which can get laughs, though we do focus on the drama of life more often than not.

Settings – The film is set in one small town, it shows that the group of young adults are close and the drama of their lives can cross paths.

Scene of the Movie – The band performances.

That Moment That Annoyed Me – Too many characters for just a film.

Final Thoughts – This is an interesting look at how young adults can spend a summer night, partying and trying to figure out relationships and life in general, it would work better as a television series as we could spend more time with the characters.