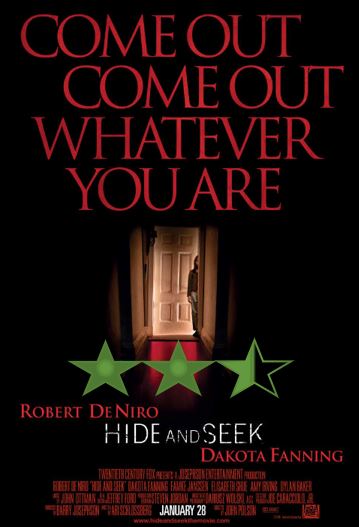 Plot: As a widower tries to piece together his life in the wake of his wife’s suicide, his daughter finds solace, at first, in her imaginary friend.

Tagline – If you want to know the secret, you have to play the game.

Story: Hide and Seek starts when psychologist David (De Niro) loses his wife to a sudden suicide, to help his daughter Emily (Fanning) through the trauma he decides to move to a more remote location upstate of New York.

David is trying to settle in with Emily, who soon starts to have her own imagine friend named Charlie, David does turn to colleague Katherine (Janssen) for advice, while trying to move on with both their lives, only Charlie starts to show an evil side.

Thoughts on Hide and Seek

Characters – David is a psychologist in the big city of New York, he has a wife and daughter, only all his skills can’t help him see the depression his own wife is suffering through, needing to put his life back together with his daughter, he needs to  make sure Emily doesn’t fall into needing more help, while navigating learning to live in a new town. Emily is the daughter that became traumatised after the death of her mother, she uses her imaginary friend to get away with doing evil things around the house. Emily is a character that you can understand the acting against the normal because dealing with loss can be difficult for a child. Katherine is the colleague that specialises in helping children, she is the one that David turns to for added advice for helping his daughter. Elizabeth is a local divorced woman with a child the same age as Emily, David tries to build a friendship for both himself and Emily with her, Elizabeth shows that people can be patient when searching for new friendship.

Performances – Robert De Niro stepping into the horror genre is something refreshing, he does show how difficult it could be for a father to keep everything together after losing a wife. Dakota Fanning as the traumatised daughter brings the fear required, while also being creepy through the film. Famke Janssen and Elisabeth Shue are both solid enough supporting the film, without needing to make that big of an impact in what is going on.

Story – The story follows a recently widowed father taking his daughter to start a new life in a quieter neighbourhood, only for her to get a new imaginary friend that doesn’t like the people in her life. Now this story could and does start by showing the effects of a trauma on a young girl, after she witnesses her mother’s suicide, this could explain the actions she ends up causing through the film, the problem with the story comes from the fact the film sets this up, only to go in a direction which makes zero sense for anything we have seen in the first act. It also doesn’t help the fact we have five yes FIVE different endings too. This is a story that completely derails because of a simple choice and ends up just being difficult to watch.

Horror/Mystery – The horror in the film is confusing too, mostly because it is weak dream sequences before anything being remotely scary happening until the final third of the film which, does have strong moments, just doesn’t make sense to what we knew before. The mystery in the film comes from trying to figure out who Charlie is, because we get suggestions it could be a person with the number of people that get introduced around the new home, add in that it could be supernatural, we are left to figure out who they are.

Settings – The film is set in upstate New York where the father and daughter are trying to start a new life away from the busy life that could have caused added stress in life. It does give the family an isolation factor which adds to the potential suspense in the film.

Scene of the Movie – Not interested in new friends.

That Moment That Annoyed Me – The third act twist just confuses everything.

Final Thoughts – This is a horror that was going in a smooth direction to be interesting only to take a twist which makes it frustrating by the end of the film.