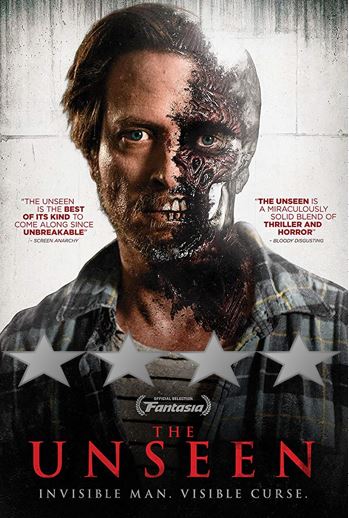 Plot: A man who abandoned his family now risks everything to find his missing daughter, including exposing the secret that he is becoming invisible.

Story: The Unseen starts when Bob Langmore (young) Must return to his family that he abandoned after his daughter Eva (Stone) starts to show signs of wanting to run away, still friendly with his ex- Darlene (Sullivan) he returns home to help, while getting a job done for the shady Crisby (Cotton).

When Eva goes missing, Bob will stop at nothing to get her back as she may also have the same disease he has, one that has been turning him invisible. Can he find a cure before it is too late for his daughter, that is the most important task for him.

Thoughts on The Unseen

Characters – Bob is a one factory worker, he has left his family for unknow reason, he has kept his end of the financial side of raising a child though, he must return when she wants to go explore the world, before going missing, but his secret has more history in genetics than he could imagine as he starts to go invisible. Darlene was the ex to whom Bob had a child with, she has raised her and must turn to Bob when she has started to act out, putting her own life in danger. Eva is the 17-year-old that is wanting to explore, she takes risk which puts her in danger as she must start to lean about the generics she got from her father.

Performances – The performances in this film are wonderful, Aden Young shows us just how withdrawn his character is through the struggles with reality that he will be facing, we see and feel the pain he is suffering from. Camille Sullivan is good without needing to do as much as the others with Julia Sarah Stone getting to improve as the film continues on.

Story – The story here shows us how an isolated man with a secret that he is slowly turning invisible that must return to his family to prepare his daughter for the change after she goes missing, while dealing with criminals who are forcing him into job. This story has so many layers it may take a while to talk through them all. First we will start with the job angle which is the weaker side of the film and by the books not being much of a challenge to keep up with. Where the story does shine comes from the slowly turning invisible side and needing to rebuild a relationship to prepare his daughter for a chance which will come her way. We could say there are elements of the Invisible Man here, but this is the slow change over an instant one. we get everything from this relationship and it only makes us want to see what the change will take from him next, this is a truly engaging storyline that must be watched all the way through.

Action/Horror/Sci-Fi – The action could be considered the safe side of the film we get the basics without seeing too much happen, the horror comes from seeing the change, we only see bits but each time we get to she the next level which will only shock. The sci-fi side of the film shows how the change is happening and puts this in the middle of an everyday lifestyle.

Special Effects – The effects are only used when needed, to show the invisibility happening, this is easily the most shocking moments in the film because you are not sure what will start to change first.

Scene of the Movie – Saving the daughter.

That Moment That Annoyed Me – It does start slowly than it needs to.

Final Thoughts – This is a slow burner that is well worth the wait, the shocking reveal will leave you shocked and only grab your attention to see what will happen next.