Plot: A blind musician hears a murder committed in the apartment upstairs from hers that sends her down a dark path into London’s gritty criminal underworld.

Story: In Darkness starts blind pianist Sofia (Dormer) starts getting worried about her neighbour Veronique (Ratajkowski) who eventually gets murdered by Marc (Skrein) who sees that Sofia on the night he commits the murder, worried she could expose him, he starts to get close to her learning that she is blind and that she isn’t a threat.

Sofia does have her own secret though which dives into a much bigger conspiracy as to what is going on within the main suspects, will the truth come out or not.

Thoughts on In Darkness

Characters – Sofia is a blind pianist that makes the best of the surrounding sounds which is why she is so respected in the music industry, she hears the murder of her upstairs neighbour which leads her down a spiral of conspiracies which she is just as involved in. Veronique is the upstairs neighbour that has been worried about her life, she does stay honest with Sofia though, until she gets murdered, which sees her connection to everyone being the key to everything. Marc is the man that is sent to kill Veronique, he needs to tie up the loose ends which sees him starting to target Sofia until he learns her position in everything. Niall is the connection that Sofia has to her past, he will help where he can always willing to help her.

Performances – Natalie Dormer does a great job in when it comes to the blind side of her character, it is when it comes to certain other sides, things start to show the weaker side of her performance. Emily Ratajkowski struggles like she always does in acting, while Ed Skrein and James Cosmo do as well as they can with their roles in the film.

Story – The story here follows a blind woman that hears a murder only to find herself in the middle of a bigger conspiracy going on with the people involved in connection with the victim. The story plays out like a thriller that wants to be bigger than it actually is capable of being, trying to through in a twist in nearly every scene which just seems to make it out that the people involved here are a lot more trained and skilled than they are portrayed for the opening parts of the film. if we had just played most of this straight, we might have gotten away with certain twists along the way, but in the end we just try to over complicate for the sake of it.

Mystery – The mystery in the film seems like it gets revealed early on, it is more why it happened, which does try to keep us guessing only to keep throwing more twists in along the way.

Settings – The film is set in London, which barely gets used to make an impact in the locations used.

Scene of the Movie – The funeral.

That Moment That Annoyed Me – Too many twists in the story.

Final Thoughts – This is a mystery thriller that just makes things more complicated than it needs to be, this format would have played out better in a television series over a film.

Plot: When Pete and Omar lose their beloved Gran they go in search of Omar’s estranged father, confronting him on the day of his daughters engagement party.

Story: Eaten by Lions starts as we follow half-brothers Omar (Aakeel) and Pete (Carroll) who have just moved into a new foster home after their Gran passes away, asking that they both look after each other. Omar wants to go in search of his real father, which Pete isn’t going to let him do alone.

The boys head to Blackpool where Omar’s estranged father is meant to live confronting him at his daughter’s engagement party, Malik (Ganatra) only to learn that it his brother Irfan (Chaudhry) is the father and he isn’t ready to be one.

Thoughts on Eaten by Lions

Characters – Omar decides to go in search for his real father after his grandmother passes away, he learns that he is the son of a rebellious member of a big Indian family and does everything he can to help Pete through the days. Pete is the half-brother of Omar, they were raised together, he doesn’t let his disability get in his way and is happy to talk he way through each situation he finds himself. Irfan is the father of Omar, he is a laidback man that isn’t ready to be a father and only shows himself to be a bad example to the boys. The rest of the characters we meet are the family that Omar is sudden thrown into and the friendly local that helps the boys out when they need help.

Performances – Antonio Aakeel does give us the reserved performance needed for his character being the straight-talking shy of the two brothers. Jack Carroll gets nearly all the laugh through his confident character, the two show excellent chemistry together. Asim Chaudhry gets laughs too showing us how he can play this role for laughs.

Story – The story follows two half-brothers raised together and with different father with different culture backgrounds that decide to go in search for one of their real fathers, this sees them heading to Blackpool and meet his father and testing his loyalty to his half-brother. This does show how brothers can come from different parents and will always be there for them, you true family will always be willing to let you in and moving on from losing a parental figure can become very difficult. The way this story is told does give us plenty of laughs and gives both boys an adventure.

Comedy – The comedy in the film does get plenty of laughs with Pete and Irfan getting most of the laughs through the film.

Settings – The film is mostly set in Blackpool, which does give us a chance to see the iconic boardwalk and tower. 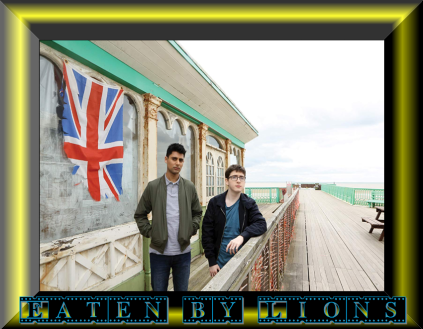 That Moment That Annoyed Me – The awkward racism from the foster parents.

Final Thoughts – This is a delightfully entertaining comedy that could be enjoyed by all and shows how cultures can clash with ease.