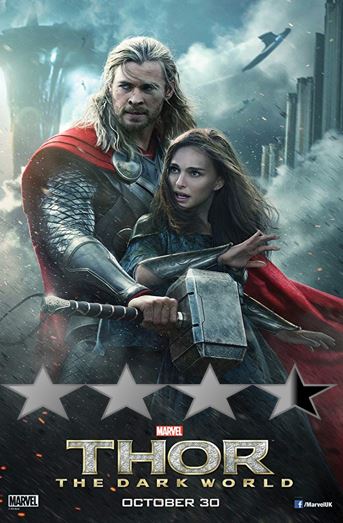 Plot: When Dr. Jane Foster gets cursed with a powerful entity known as the Aether, Thor is heralded of the cosmic event known as the Convergence and the genocidal Dark Elves.

Tagline – There was darkness.

Story: Thor: The Dark World starts as Thor (Hemsworth) must restore the power in Asgard after Loki’s (Hiddleston) actions, this has made him in the position he should be, waiting to take over his father Odin’s (Hopkins) role. Meanwhile on Earth Jane (Portman) is trying to move with her life, but in London she discovers an unusual series of events which ends up taking her to Elf world.

When Jane becomes cursed, Thor takes her to Asgard to find a cure, which gives Malekith (Eccleston) a chance to lead his army back into combat so he can return the universe back to darkness. Thor must turn to Loki t help him defeat Malekith and save the universe.

Thoughts on Thor: The Dark World

Characters – Thor is once again preparing to take his throne in Asgard, he has restored faith in the nine realms, but he still misses Jane. When she becomes cursed, he returns to Earth to save her, which only brings back an ancient enemy to the Asgardians in the Dark Elves, he must disobey his father once again to end the threat and save the woman he loves. Jane is trying to get on with her life now, her research has taken her to London where she is trying to get over Thor, her investigation sees her cursed and taken to Asgard to learn about Thor’s home world. Loki is locked up for his actions, after his mother is murdered, Thor turns to him for help to get vengeance. Malekith is the leader of the Dark Elves, he has waited for his chance to bring the universe into darkness once again, killing Frigga the mother of Thor.

Performances – Chris Hemsworth continues to make Thor one of the most entertaining character in the universe. Natalie Portman was known to not be interested in being in the film, it does show in her performance which does disappoint. Tom Hiddleston brings another dimension to his character here which is only going to make him a more loved character. Christopher Eccleston does give us a basic villain, one that is only after power and is mostly under make up, making his performance harder to judge.

Story – The story here follows Thor on his latest adventure, one where he must face an ancient enemy who wants to put the universe into darkness, while finally returning to Jane who has become cursed by the Dark Elves magic. This is another sequel that does address the previous films in the franchise by showing the hints the Thor and Loki could still rebuild their bond even after what Loki has done, we address forbidden relationships between Thor and Jane, have a villain that is obsessed with power, though isn’t the most three-dimensional and see Thor needing to learn more about his responsibilities as a potential king. This is everything you would expect a sequel to be in this universe.

Action/Fantasy – The action involved in this film is mostly big CGI chases sequences between spacecrafts, we do get Thor doing the hammer routine which works well enough for the film. the fantasy side of the film continues to build on the idea that the worlds above have been fighting longer than people could imagine with fresh enemies waiting in the shadows.

Settings – The film uses Asgard, the home world of the Dark Elves and London as the main settings, each has its own action sequences which also shows what Thor is fighting for.

Special Effects – The effects are not as strong as previous films, but we do get some very impressive scenes none the less, the certain moments of weakness do hold the marks up though,

Scene of the Movie – London battle.

That Moment That Annoyed Me – The villain isn’t as interesting as previous ones.

Final Thoughts – This is still an entertaining sequel, it might not be as strong as some of the previous films, but it entertains throughout.