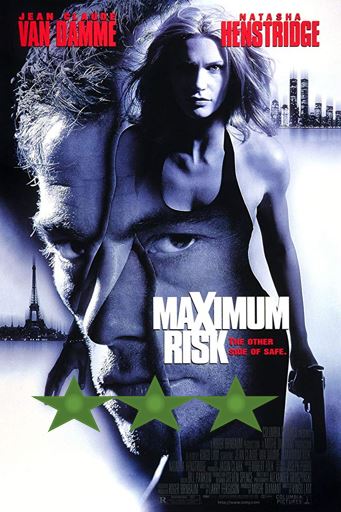 Plot: A cop/flic discovers that he had a twin who just got murdered in Nice, France. In order to find out who did it, he takes his place including the cute girlfriend in Little Odessa, NYC.

Tagline – The other side of safe.

Story: Maximum Risk starts when a French police detective Alain Moreau (Van Damme) sees a man killed, the man looks identical to him and Alain learns that he did in fact have a twin brother. Alain must now look to investigate the murder of his twin brother with his partner Sebastien (Anglade).

Alain learns that his brother was adopted by a Russian family and that he has gone onto to raise up the Russian mob, only he is wanted by them, Alain is joined by Alex (Henstridge) his brother’s girlfriend as they look to bring down Ivan (Grenier) the leader of the Russian Mob.

Characters – Alain is a French police detective that lives a normal life in Nice, his life if turned upside down when he finds a body that looks identical to himself, learning that he does have a twin brother. Alain go in search for answers which leads him to New York city and the Russian mob, here Alain must learn who he can trust and why his brother is killed, while showing all his fighting skills. Alex is the brother’s girlfriend, she knows he danger Alain has walked into and will help him get out of the life of crime that his brother was part of. Sebastien is the partner of Alain back in France, he has worked with him for years, only he stays in France for the investigation. Ivan Dzasokhov is the Russian that has been hunting down Alain, he wants something that he posses and knows it could give up his freedom is the secret it released.

Performances – Jean-Claude Van Damme is the man we know for action, when he gets to fight we know we get quality scenes, when it comes to becoming serious he isn’t on the same level. Natasha Henstridge was fresh of the back of Species here and easily fit the role for looks, while never getting her chance to do much more. The rest of the cast fill their roles to help make Van Damme look good in the action sequences.

Story – The story follows a man that must unlock the mystery behind why his unknown brother was murdered, which sees him enter the world of the Russian mob. Let’s be honest, the story isn’t always the most important part of any Van Damme movie, we just want to watch him kick people’s asses. This story puts him in a place where he just doesn’t know where each step will take him, we get plenty of people that want Alain dead which shows he doesn’t know who to trust, but we always know that he is going to come out on top, it is an easy relaxing action film for the story side of things.

Action/Crime/Mystery – The action here involves Van Damme doing his thing, kicking ass regardless of the size of the opponent. We follow a police officer entering the world of the Russian mob which brings us into the crime elements of the story, while the mystery comes from just who could be trusted during this time.

Settings – The film takes place in two main cities, Nice in France and New York, we do get the fish out of water idea with Alain in New York here.

Scene of the Movie – The sauna fight.

That Moment That Annoyed Me – It is pretty basic.

Final Thoughts – This is a simple easy to follow action movie that we are used to seeing from Van Damme.

Why I’ve Picked this choice – This is a Netflix suggestion, it is a Bollywood film, one that could be used to talk about crime, if you have seen it, let me know what you think about it.