Plot: A CIA operative hires a team of mercenaries to eliminate a Latin dictator and a renegade CIA agent.

Tagline – Every movie has a hero. This one has them all.

Story: The Expendables starts as we get to see Barney Ross (Stallone) and his team Lee (Statham), Yin (Li), Gunner (Lundgren), Toll (Couture) and Hale (Crews) eliminate a threat, to show just how capable they are at dealing with international threats.

Once home Barney is given a new assignment, to take out General Garza (Zayas) and James Munroe (Roberts) who are controlling an asset the government require, this soon turns into the five-man army taking on a full army.

Thoughts on The Expendables

Characters – Barney Ross is the leader of the mercenaries, he does play by a rule book, which sees him needing make a difficult decision with one of his team. He takes the latest job once he realizes that sometimes the impossible can make a big difference being a better all-around combat asset. Lee Christmas is Barney’s second in command, the one that Barney will turn to most, during this story he finds himself having lady problems and shows a man what will happen if you beat one up, he is also the knife expert on the team. Yin is the smallest member of the team, he is the martial artist of the team and is always worried about enough money for his family. Gunner is the member of the team which gets kicked out because he wants too much brutality in the missions, he has a drug problem which needs to be cleaned up before he could ever be considered back on the team. Eric Roberts is the businessman that has taken over the island, he is paying for everything even if it makes enemies out of the locals, he will strike fear into them with fear. Paine is the strongest member of Munroe’s team, he has been waiting for a challenge which Barney and his team will offer him.

Performances – This movie does have an all-star cast of action heroes, Sylvester Stallone does take centre stage here and does what he knows how to be, a lead action star, Jason Statham does this too, with a little more subtle side to his outside the business performance. These two both get the best action moments in the film. Jet Li does well with the action, but gets wasted outside of these moments, while Dolph Lundgren does what he can with a character that does have plenty more to offer to this film. Eric Roberts fits the generic villainous role, he doesn’t get enough time to make his character as memorable as he could have been. 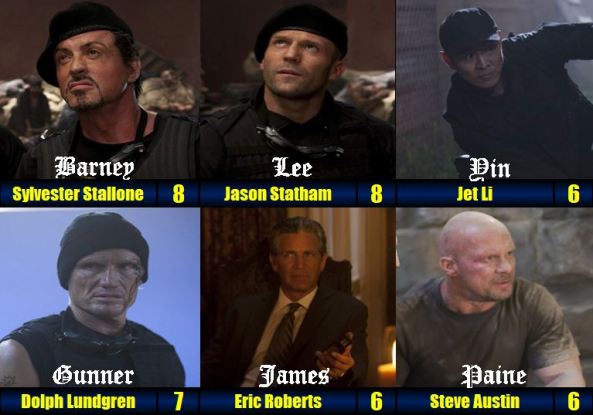 Story – The story follows a group of mercenaries that are hired to solve the militant control of a small island in the Gulf of Mexico. When it comes to the story, we don’t need too much, this film is more designed to show of the action stars of the movie industry. By keeping everything on the simple side we get an enjoyable story to see unfold, though it would have been nice to get some sort of character development about the crew. This story is easy to watch without ever needing to test us.

Action/Adventure – The action in the film is wildly over the top with a mix of guns, knives and hand to hand combat, all you would want from the cast we have here. The adventure side of the film does take our crew to a new island that they haven’t heard of before to make the events of the film happen.

Settings – The film mixes the home that the men have back in America with the island that needs freeing, showing how they can and will adapt to any landscape they are placed in. 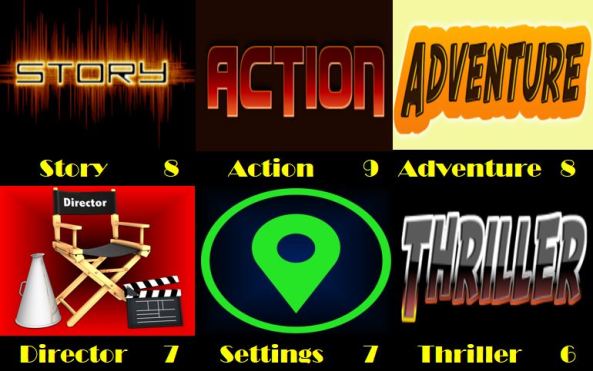 Scene of the Movie – Fly by.

That Moment That Annoyed Me – We don’t get enough Jet Li.

Final Thoughts – This is one movie that is purely for the action fans, it goes well over the top and deliveries you favourite action stars doing what they do best, shooting gun and fighting.

Plot: A sniper on a mercenary assassination team, kills the minister of mines of the Congo. Terrier’s successful kill shot forces him into hiding. Returning to the Congo years later, he becomes the target of a hit squad himself.

Story: The Gunman starts as we meet Terrier (Penn) a mercenary whose cover as a humanitarian working in Congo who assignment was to kill the new minster of mining whose new policy could bring the country to its knees again. With the mission being a success, Terrier is forced to flee the country for his own safety. Years past and Terrier believes he is being followed and turns to his old friends who worked on that last mission, Stanley (Winstone), Terrance (Rylance) and Felix (Bardem) to see if anyone leaked the information about the hit.

Not knowing who to trust Terrier must race against tie to figure out the truth with his own life and loved ones lives on the line as the past continues to come back and haunt him.

Thoughts on The Gunman

Characters – Terrier is a sniper mercenary who poses as a humanitarian, he knows how to make connections and uses them to complete jobs, though his latest job turns out to be his last as he goes into hiding. Learning his life is in danger he goes in search for answers about who is after him, giving him a chance to see his love once again. Annie is the woman that Terrier must leave when he goes into hiding, the woman he loved, she has moved on though she still does love Terrier even after all these years. Felix is one of the connections from the job, he had always been jealous of the relationship Terrier and Annie had, leaving him to make his move once Terrier is out of the picture. Stanley is the connection in London that is a good friend that will help out where needed. Terrance is the one of the group which continued his success and knows who is still in the loop.

Performances – When it comes to performances we need to face the reality that Sean Penn is trying his luck at the Liam Neeson style of action film, he just doesn’t have the same levels of action in him and for the most part he doesn’t do anything to make us truly care about his character. When we look at the supporting cast on the male side we get four big-names we know do solid enough supporting roles, while Jasmine Trinca is solid enough as the love interest for Terrier.

Story – The story follows a mercenary that finds his previous job exposed to the people it has effective, but soon needs to learn who released the information. The was sold to be a fast paced action thriller, though the story is slow burning political thriller which focuses on the ideas that have been put forward when the rich try to control countries for their own means. The slow pace takes us out of the story because things just become boring for the most part.

Action/Crime – For an action film we get the very basic levels of shooting and combat which are covering up the bigger crime going on between the men.

Settings – The film takes us from growing African country that the Europeans and Americans are looking to take advantage off, to Europe as we get the locations that are designed to show us the hiding places are in every city.

Special Effects – The effects come from how the wounds look and that is about it, for the most part they are the strongest part of the film. 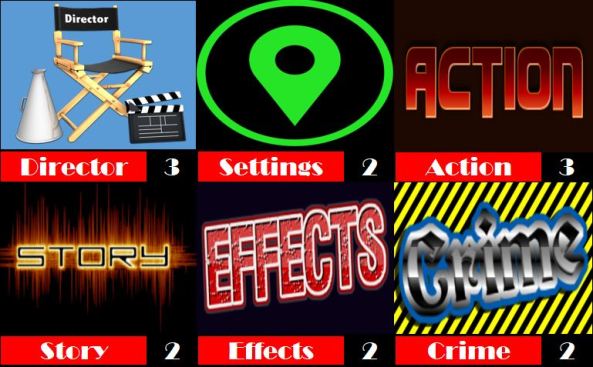 Scene of the Movie – Sniper time.

That Moment That Annoyed Me – The pacing.

Final Thoughts – This is a slow burning action crime thriller that lacks any tension, suspicious about who the villain is and ends up playing out like a paint by numbers cliché.