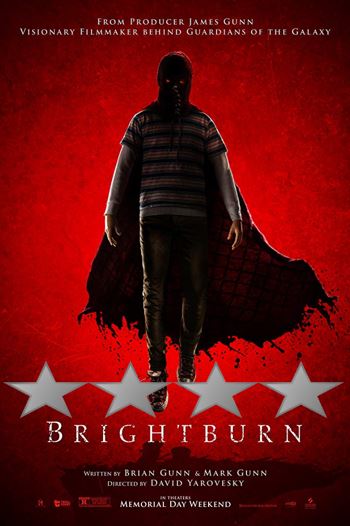 Plot: What if a child from another world crash-landed on Earth, but instead of becoming a hero to mankind, he proved to be something far more sinister?

Tagline – Evil Has Found Its Superhero.

Story: Brightburn starts when a farming couple Tori (Banks) and Kyle (Denman) have been struggling to have children, one night something from out of space crash lands on their land, inside they find a small child and adopt him as their own, Brandon (Dunn). Everything seems normal for the most part, he is a genius which does make him social awkward though.

On Brandon’s 12th birthday, he starts to hear voices calling him to his spaceship which has been hidden, he learns that he does have super strength and other abilities. It isn’t long before Brandon starts using these abilities for his own sinister intentions, which makes him a threat to everybody, even his own parents, with Tori trying her hardest to remain loyal to him, can she stop him from the evil inside?

Characters – Tori is adopted mother of Brandon, she sees him as a blessing and will defending him through any troubles he finds himself in. she does enjoy painting which does seem to be her way to unwind and through the 12th year of Brandon, she is left wondering if he is like her or it is something else controlling him. Kyle is the husband a farmer, he does have to give his son ‘the talk’ which is one of the funniest scenes of the film, he has taught Brandon responsibility and does become the overreacting parent through the situations, a nice spin on the normal. Brandon is the young boy/alien that has bee raised like a normal child, he is social awkward, a loner at school, even his 12th birthday party is in a diner with his family, no friends. Once he starts hearing noises he gets drawn to his craft, which will be the beginning of his newly discovered powers. The powers his has will make him a danger not just to his town, but to the world because they are limitless. We do have other characters including the Aunt and her husband, the fellow students that see Brandon as an outsider and the sheriff trying to figure out the crimes that have been happening around the town.

Performances – Elizabeth Banks does bring us a great performance, we see the undying love of a mother against the shadows of what her child’s true nature is, constantly conflicted through the film. David Denman brings us the father figure, he plays this opposite to the normal because usually we don’t see the weakness or fear in a father and David brings this requirement to the role. Jackson A Dunn is the true star of the show here, he makes young Brandon feel both terrifying and welcoming, as in needing help or a friend, he has moments of being creepy, while moments of pure calmness.

Story – The story here follows a couple that adopt a young boy who feel from space, it seems like everything is going well, until he reaches 12 and his true powers start to come out, leaving the parents in the difficult position of loving their son or turning over a monster that could destroy the world. This story does take the superhero genre in a new direction, we can clearly see how the origin or Brandon place the same as Superman, coming from space adopted and learning about powers, while this time we take a dramatic turn towards the darker side of powers. We do go through the learning process like new superheroes would go through, this is important. The only downside with the story, comes from the ideas that Brandon could be in the pivotal position on which side of good or evil he falls on, only we don’t get to see any hint that he could ever be good. Away from this minor negative, we do see a horror story unfold that becomes bigger and more devastating as the powers become clearer.

Horror/Sci-Fi – The horror in this film comes from the power that Brandon is having, we see what he does to people, with each injury becomes more graphic and shocking as the rampage goes on. The sci-fi elements of the film focus on the idea that Brandon has come from space, we simply don’t know what he could be capable off.

Settings – Th film is set in a small town of Brightburn, it is a close community which is left in shock after the first incident, Brandon however is raised on a small farm which shows that his isolation isn’t just school, but home too.

Special Effects – When we look at the effects, we have some brilliant injury effects, that are front and centre and will make you want to look away, a few of the flying moments are not the best, but they are not what the scenes are focused on at the time.

That Moment That Annoyed Me – It would have been nice to see him have a chance to be good.

Final Thoughts – This is a dark superhero movie, unlike anything we have seen before, it feels original, while playing opposite to what we know and isn’t afraid to spill a little blood.

Overall: The Dark Universe has Started.