Plot: Based on the absurd but true 1973 bank heist and hostage crisis in Stockholm that was documented in the New Yorker as the origins of the ‘Stockholm Syndrome’.

Tagline – Based on an Absurd but True Story

Verdict: Hawke is a Blast

Story: The Captor starts when American Kaj Hansson (Hawke) walks into a bank taking hostages in bank clerks Bianca Lind (Rapace) and Klara Mardh (Santos), he wants Gunnar Sorensson (Strong) released from prison along with his outlandish demands that Chief Mattsson (Heyerdahl) must try to put together.

As the hostage situation continue we start to see the truth unravel and see how Bianca starts to respect Kaj even feeling like she is part of the heist herself, can they make it out of the heist as the origin of the term ‘Stockholm Syndrome’ is born here.

Thoughts on The Captor

Characters – Kaj Hansson is the American that has walked into the bank, he doesn’t really have a plan, he knows what he wants though, he wants to be fair to his hostages, never actually wanting to hurt anybody, just to make sure the police see him as a threat. He starts to make friends with the hostages too. Bianca Lind is the bank clerk that has her own family and finds herself being held hostage, she becomes the stronger of the two women, she starts to become attracted to Kaj believing he isn’t a bad guy, this is her story. Gunnar Sorensson is the man that Kaj wants released from prison, he is one of the most famous bank robbers in the country and he sees the mistakes that Kaj is making, while having a deal with the Chief. Chief Mattsson is the man trying to end the situation, he is trying to stay one step ahead of Kaj to get everyone out alive.

Performances – Ethan Hawke is a delight to watch in this film, he plays the over the top which sums up what the character needs to be through this film. Noomi Rapace plays her role well giving us a character which is both interested and scared through the film. Mark Strong is the supporting acting for a generation, he brings his complex character to life with ease once again. Christopher Heyerdahl is strong through the film showing a determined, though calm man through the film.

Story – The story here follows a bank heist which led to the first case of Stockholm Syndrome, where the hostage falls in love with the hostage taker, we see how this hostage situation unfolds with the outlandish demands as the woman starts to fall for him. When it comes to bank heist movies, we have seen plenty, they usually revolve around the criminals and the police trying to stay ahead of each other, with this one we do have that, but we have the added dynamic of seeing how the hostages and takers start to bond when they see that everything can be kept under control, remember this is set in 1973 so the technology isn’t going to be a game changer in how everything is solved. Seeing both sides get to the talking can go through moments of slow story telling, but it isn’t long until Kaj goes a little bit crazy demanding our attention once again. With a subplot involving Gunnar’s position in the situation, we get to see how Kaj really doesn’t know what he is doing making it easier to help the hostages take sympathy with him. It was nice to have just normal police that aren’t looking to solve a personal problem with this case, which is so often the case in these stories.

Comedy/Crime – The comedy in the film comes from everything Kaj seems to do, from his outfit with wig, cowboy hat and American swagger, to how he overreacts to everything that is going on, the crime is loosely based on a real incident, with the names changed, it is a hostage situation, but you never feel like there is a threat.

Settings – Most of the film is set within the walls of the bank, it is a simple and well craft set that shows us just how the people have been thrown together in this situation.

Scene of the Movie – Kaj shares a pear.

That Moment That Annoyed Me – We don’t feel like there is a threat in the film.

Final Thoughts – This is a different way to tell a heist movie, it does show us how hostages can fall in love with their captors and overtime even support them, we get the routine hostage talks and end up right where we need to for the story to flow with ease.

A Murder of Innocence- Final Vision Trailer from Vision Films on Vimeo.

Plot: A disturbed man with unknown psychic abilities tries to unravel the mystery of his parent’s disappearance while battling his own demons.

Story: The Dark Within starts after an experiment goes wrong leading to Marcus (Flannery) growing up facing troubled visions and illnesses, in search for answers his doctor, Dr Norton (Styles) is trying to find answers to his past, which sends him to his parent’s cabin in a remote woodland area.

In the cabin the memories come running back to Marcus through visions and he is joined by his ex-girlfriend Sarah (Carelli) that is willing to help him put his life back together, but the truth itself will be too shocking for Marcus to handle.

Thoughts on The Dark Within

Characters – Marcus is a disturbed man with unknown psychic abilities, he spends times in therapy trying to piece together the pieces of his past to understand just what happened to him as a child, he has made himself distant from his loved ones and in a final attempt to unlock the truth, he heads to his parent’s old cabin, which soon starts to unlock the shocking truth about his childhood, as he starts to lose sense of reality. Sarah is the ex-girlfriend that has a restraining order against Marcus, she decides to put that aside to help Marcus find answers, being the only person that will be there for him. Dr Norton is the lady that is trying to help Marcus understand his past, she suggests the cabin as a location in which could hold the answers he requires. Andrew is the father of Marcus, the man that was performing the experiment which saw him leave Marcus as a young child, he knew the value of his idea and the consequences once things started to go wrong.

Performances – Paul Flannery in the leading role is great to watch, he gives us a performance of a man that is losing sense of his reality, with moments of desperate hope, while others are filled with fear and moments where he tries to remain calm, he pulls us through the film with his performance that is needed to help carry the film. Kendra Carelli does get time to shine, but like most of the supporting cast they are only used when required and make the most of their screen time.

Story – The story here follows a man that has been losing sense of reality because of a childhood trauma, he goes in search for answers that will only leave him feeling shocked and needing to battle evil. One of the easiest ways to describe the story at times would be like watching ‘The Evil Dead’ one man trapped in a cabin trying to remain sane, while a host of different paranormal incidents come in his direction, this story does go deeper than just that though, because we get involved in a scientific experiment which has caused the events to unfold. There could be one side of the story which does get overused, which does frustrate, though it does only add to the unknown about what is going on. For a story that does revolve around the unknown mindset, this is one that does keep you guessing and does make you question everything you are seeing.

Horror – The horror in the film does comes from the unknown hauntings Marcus is experiencing, each one of these become more shocking as the events of the film do unfold, with moments that are meant to disturb along the way.

Settings – The film does use the one location for the setting, which is the remote cabin in the woods, which does create the isolation required for the film.

Special Effects – The effects do show the budget the film is working with, they do work well for the film, when we get to the creature it will leave people feeling scared by the end of the film. 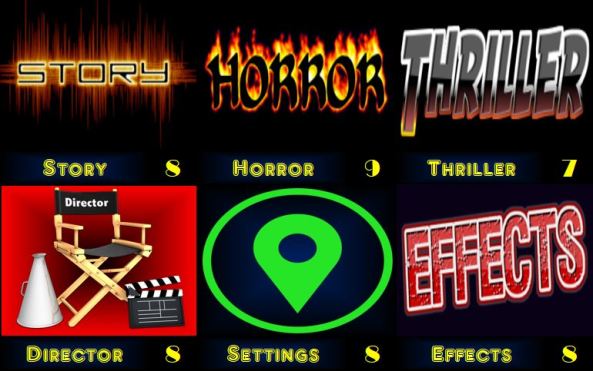 Scene of the Movie – The creature’s first appearance.

That Moment That Annoyed Me – The Evil Dead laugh.

Final Thoughts – This is an entertaining shock filled horror that is very enjoyable, we get a story that will keep you guessing and a creature that could strike the fear into the audience.