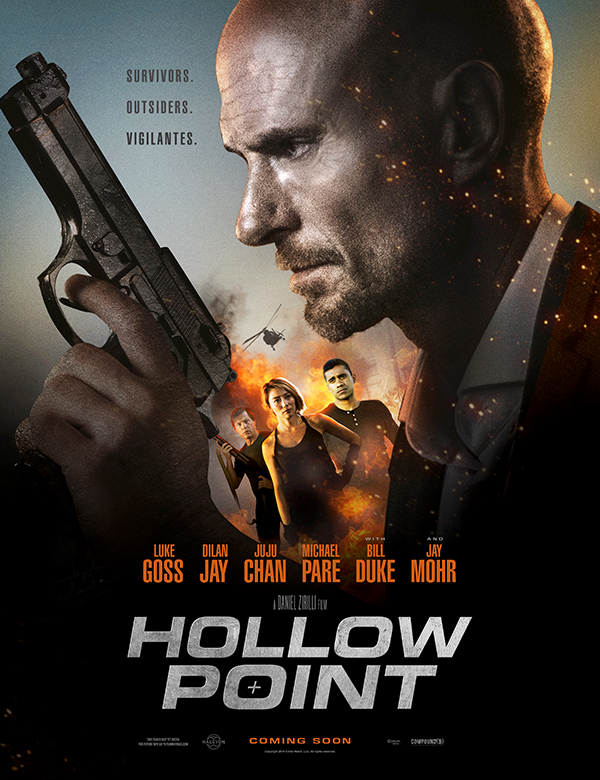 Dilan has broken down barriers in Sri Lanka by recruiting women in his first production, including Director of Photography Carmen Cabana.

Hollow Point does have a strong cast including

If you want to see the trailer follow the link

Plot: After the disappearance of her scientist father, three peculiar beings send Meg, her brother, and her friend to space in order to find him.

Tagline – Be a warrior

Story: A Wrinkle in Time starts when a trouble high school student Meg (Reid) hasn’t given up hope on being reunited with her father Mr Murry (Pine) after his sudden disappearance. Meg has become closed off from the world with her adopted brother Charles Wallace (McCabe) noticing the change in her. Meg, Charles and Calvin (Miller) get visited by Mrs Whatsit (Witherspoon) that opens up the possibilities for answers.

Mrs Whatsit takes the three children on an adventure through the universe with Mrs Which (Winfrey) and Mrs Who (Kaling), who believe they can locate Mr Murry after his research has taken him across the universe unlike anyone in human history.

Thoughts on A Wrinkle in Time

Characters – Meg is an outsider teenage girl, daughter of two brilliant scientists, with her father disappeared for four years now. She went from the popular out going girl to the shy closed off one. she has never given up hope of finding her father, which does leave questions about her relationship with her mother, she gets a chance to find her father with the will she shows in her heart. Mrs Which leads the three light entities that can help Meg travel the universe to find her father, she isn’t just guiding Meg, but the newest member of the team Mrs Whatsit. Mrs Whatsit is the bubbly member of the light entities, she is on her first mission of guidance which does see her make mistakes along the way. Mrs Who is the third member of the team, she is always positive like the rest only she gets the least amount of time to do anything of the three. Mr Murry is the father that has gone missing, he is a brilliant scientist that has always believed in travel through the universe to be possible and has been searching for a way to achieve. Calvin is the high school friend of Meg that ends up on the journey, he wants to support her even when it shows his own weakness in the world.

Performances – Storm Reid is the highlight of the film which sees her going on the adventure to find her father, this is a disappointing as we do have a talent cast, only they just don’t seem to shine on the levels you would expect them to reach.

Story – The story here follows a teenage girl that gets to do on an adventure across the universe in search for her father through the powers of light entities. This is a story that has come from a popular novel and is meant to show the science behind potential travel through the universe and how the power is within us all. This is a story that just drags along, it doesn’t offer anything to the world we are entering. This story could have so much potential and ends up just glossing over too much, making it a hard watch.

Adventure/Fantasy/Sci-Fi – The adventure side of the film shows the journey that takes the children across the universe to see just where one’s father has gone, this does show us the fantasy elements of the film in the sci-fi universe we end up going along.

Settings – The film is set in a fictional land where the people can travel to unknown planets in the universe, each one has its own unique look.

Special Effects – The visual effects used to create the different worlds look beautiful, only they don’t seem to make anything feel as important to the story.

Scene of the Movie – Understand other people’s problems from behind closed doors.

That Moment That Annoyed Me – This story just doesn’t become interesting.

Final Thoughts – This is a film that had so much potential only to fall so short, it has an amazing cast that just don’t get a chance to shine, the story just doesn’t get us going like it should do.

Plot: In an ancient world where monsters rule the land while humans keep to their own kingdom, a baby monster, Wuba, is born to a human father and monster queen. When mortals and creatures alike set out to capture the newborn, Wuba’s adventure begins. The cute baby monster Huba is the child of a human man and a monster queen, threatened by both monster-hating humans and monsters attempting to capture the new-born in an ancient world based on medieval China.

Tagline – The monsters just got bigger

Story: Monster Hunt starts as we enter the ancient world where monsters rule and are now in the middle of a civil war, the Queen in on the run to save her baby which lands her to the path of humans, Song Tianyin (Jing) and Huo Xiaolan (Bai), she passes her baby to Song to protect from the people who are hunting it.

The two set off on their adventure to keep the young baby monster Wubu safe in an attempt to return him to his father when both monsters and humans are chasing them down.

Characters – Huo Xiaolan is one of the two people given the responsibility to look after the new royal baby, she takes it with her travelling partner, she does seem to be the brains between the two and equally capable in combat. Song Tianyin is the other travelling partner, he is impregnated by the queen and takes responsibility for the baby, comes off as the butt of the jokes more often than not. Along the way we do meet a host of colourful characters which are after the prince for their own reasons.

Performances – The performances from the whole cast are good throughout, Baihe Bai and Boran Jing work very well together and have wonderful chemistry between the pair.

Story – The story brings us into the world of monsters and humans where the next generation of one species is being bought into the world that is being hunted down only to be guarded by a couple of humans. This does everything you would come to expect when it comes to returning a lost child to their family, it does show us how the people need to learn to overcome their own problems to become the person they were meant to be.

Action/Adventure/Fantasy – The action is good throughout the film with a mix of combats going on, the adventure takes our characters on out of their comfort zone to achieve the mission, with the fantasy elements of the film being used to show us monsters and humans together.

Settings – The film takes place in ancient China which works but also hinders this for the world cinema.

Special Effects – The effects are good in the film and concept behind the creations can be seen working in the real world.

That Moment That Annoyed Me – It did get confusing at times.

Final Thoughts – This is one for the fans of the monster hunter idea, it does show character developments on the journey and the adventure feels like a must for the peace of the world.

Overall: Simple and fun throughout even if it can be hard to keep up with.